As we were heading out to breakfast this morning, Michael opened the door onto our balcony and a small Gecko hurried into the room.  Michael chased him but he ran under the dresser before we could catch him.   I told Michael that I did NOT want to wake up in the middle of the night with him plastered to my face with the suckers on his feet!!!

For this our first day at XTBG, Gang (pronounced Goung) wanted to give us a tour of the garden, especially to give me an idea of where I might be walking in the next few days.  We walked quickly past many things that I will go back and photograph when I have time.  Most Chinese people stroll when they walk and their path is erratic.  Michael likened it to a dance with no predictable steps.   But Gang was different…..he walked in a straight line and FAST…..even I, with my long legs, had trouble keeping up with him.

We also had to be careful when walking because many of the stone paths had a slimy layer of mold on them and you wouldn’t know it until your feet started slipping.  I had numerous “near misses” during the walk and will have to remember to be careful tomorrow!!!

One of the first places that we stopped was the “dancing plant”, also known as a “Telegraph Plant.  This plant has small leaves on a hinge and they will move in response to certain stimuli….like singing!!!   The tour director would sing and all of the tourists would crowd around to get a photo of the moving plant…. 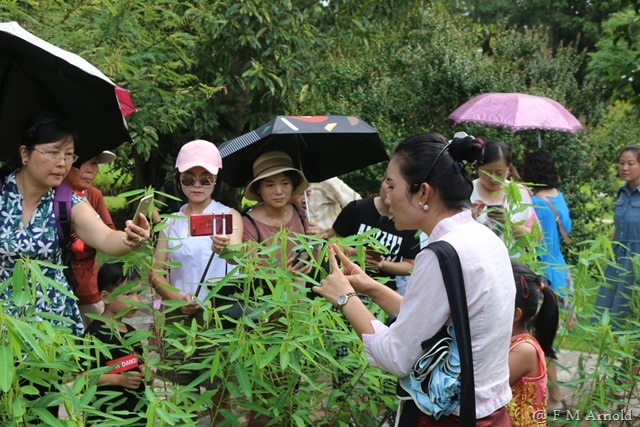 While I was photographing this event, Michael was approached by two gentlemen who were English teachers in Nanjing.  He enjoyed meeting them and I think that they enjoyed practicing their English….. 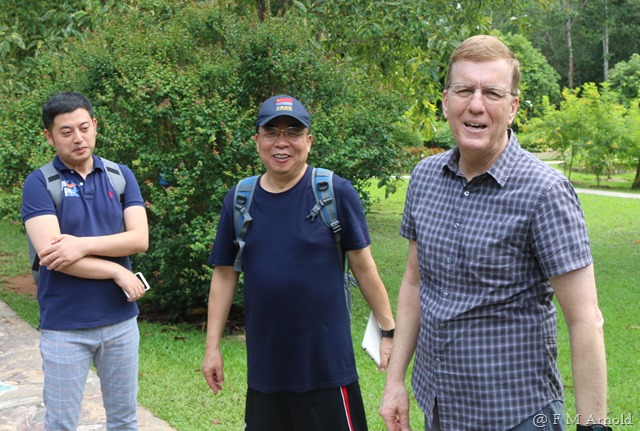 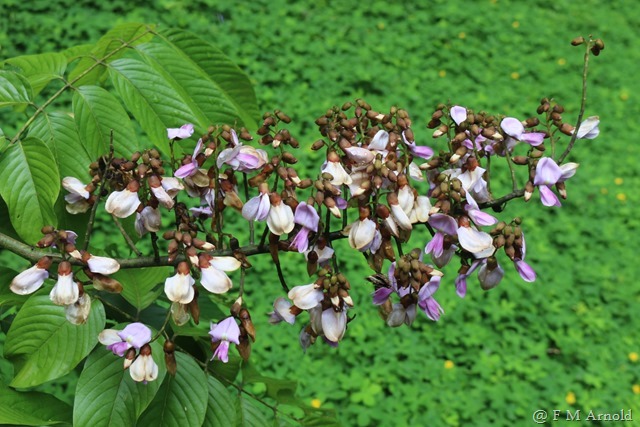 ….but on closer inspection, we found a moth feeding on one of the flowers….. 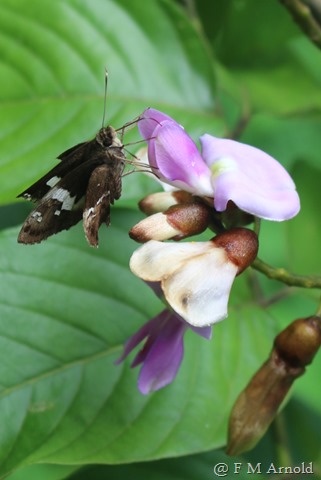 ….and ants on another area of the stem….. 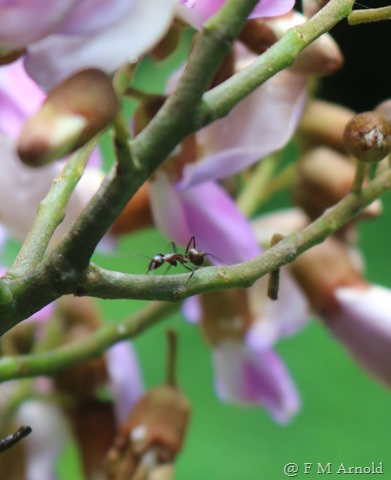 The ants are considered to be nectar robbers…..let this non-scientist explain…..   The nectar on a flower is located down inside the flower and the pollen is on a stem (anther) above the nectar.   Normal nectar feeders, like bees and butterflies push past the anther to get to the nectar, thus taking the pollen away to fertilize another flower.  The ants don’t push thru the pollen so they  “steal the reward” but don’t help the plant.  They do help the plant in another way….they protect it by attacking other birds or herbivores that might eat the plant before it can be pollinated.  Okay…science lesson is over!!

Taking photos is sometimes a trial as many people will crowd around you to take the same photo.   In this case, I stood my ground and got a nice photo of this interesting plant….. 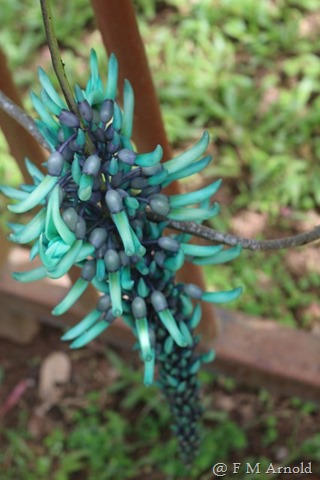 By the way, I love the chandelier in the hotel lobby…… 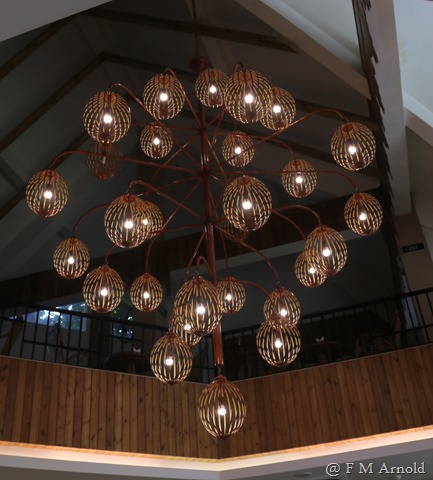 It reminds me of some of the flowers that I am seeing in the garden.

In the afternoon, we were picked up by two of the  XTBG researchers with the plan for them to take us (and another visitor named Doyle)  to “Green Stone Forest”, a rock formation just a few miles from the garden.  The only problem was that, just as we hopped onto the open bus to make the trip, it started POURING rain…..this is the tropics you know!!    It was fun to be riding in an open car with thunder booming around us, even though we had to use our umbrellas in the cart to keep semi-dry.

We arrived at the visitor center next to the forest and sheltered there until the rain had mostly stopped.   It was hard to tell if it had really stopped since there were so many tall trees that water was dripping off of.  But on we went.

The road that we walked on was extremely slick, especially along the edges and one of the women was VERY concerned that we were going to fall down.   As we would drift toward the side, she would come beside us and shoo us back to the middle….kind of like a Mother Hen!!

We reached the first set of stairs leading into the forest and UP we went…. 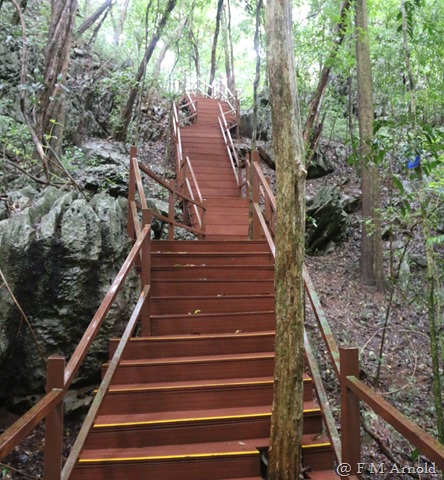 Michael’s comment was “Just what we want to do is go higher during a Thunderstorm!!”

As we walked, we saw typical rainforest flora and I was greatly reminded of our walk on Barro-Colorado island in Panama.  There were HUGE Buttress Trees….. 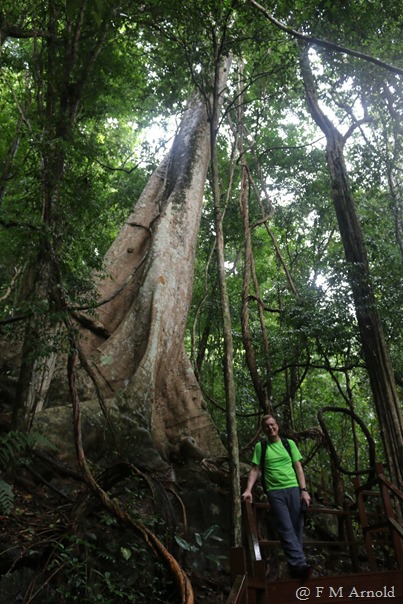 …..and interesting, if not slimy, Crustaceans…. 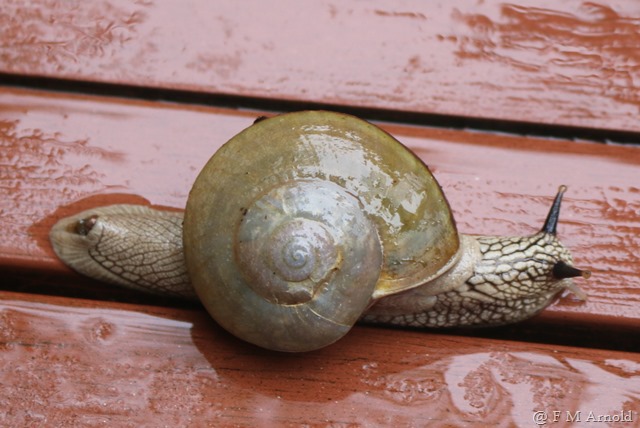 There were many stops to discuss science…. 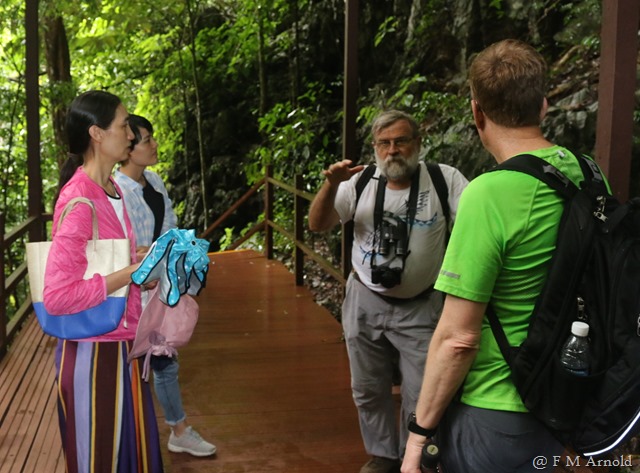 And more steps going ever up…. 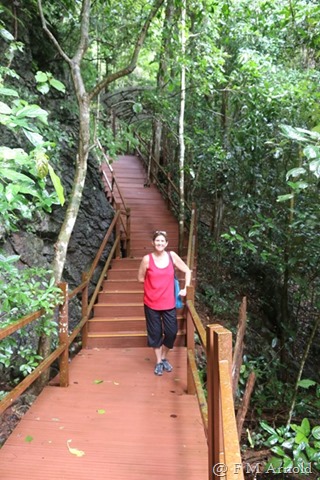 We were one of the few parties of  people in this area and Michael asked why.  The answer was that  Chinese people don’t want to exert themselves on the steps and the tour guides don’t either.    But, they missed out on the best parts.    We kept seeing this sign but were not sure of what they were trying to say….. 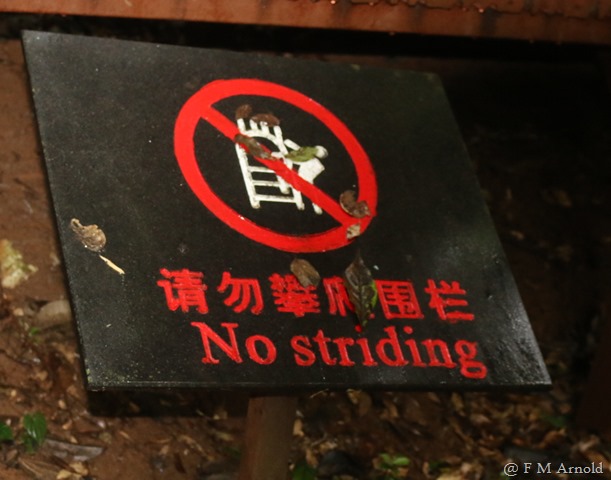 ….maybe it was supposed to be “No Running”.   Since we were both huffing and puffing our way up the stairs, there was no worry of  this happening!!!

We came to the area called “Couple Peaks” (Instead of Twin Peaks). and enjoyed a magnificent view of the rainforest…. 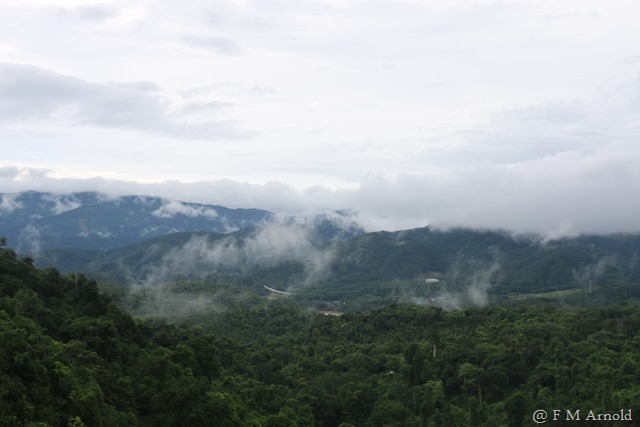 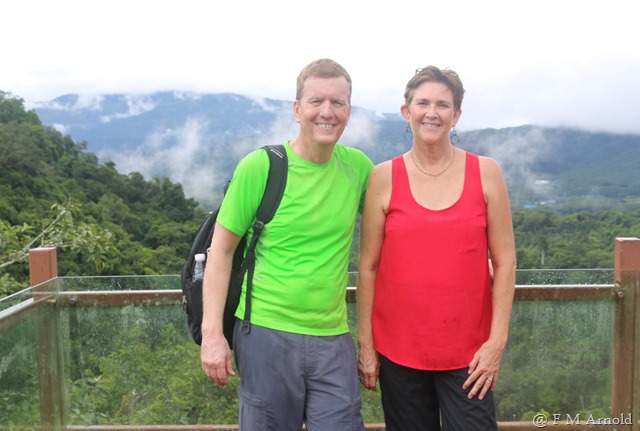 So now it was DOWN the very steep stairs….. 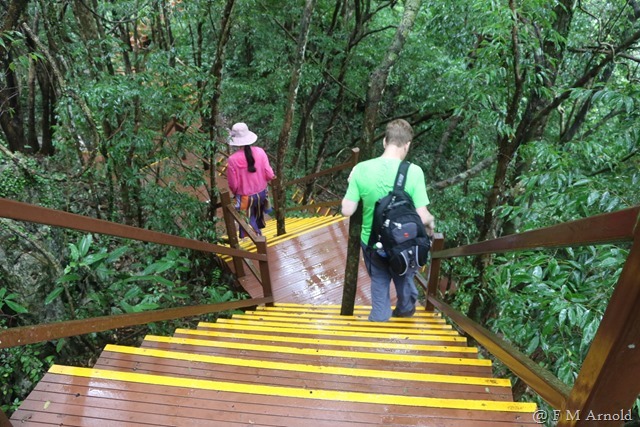 ….and back up again to the second peak…. 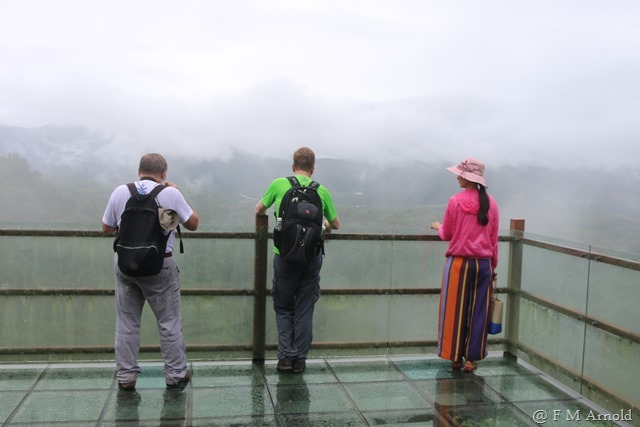 This one was even more interesting as the floor was made of GLASS panels….a little freaky!!

The view was gorgeous…… 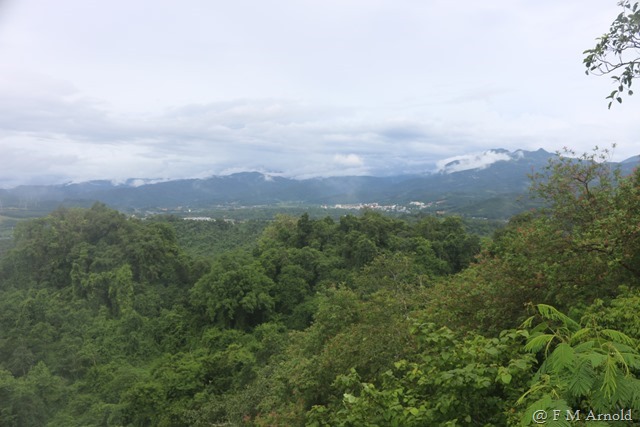 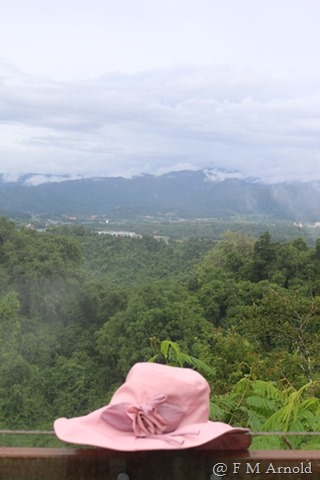 After another round of picture taking before the clouds settled in….. 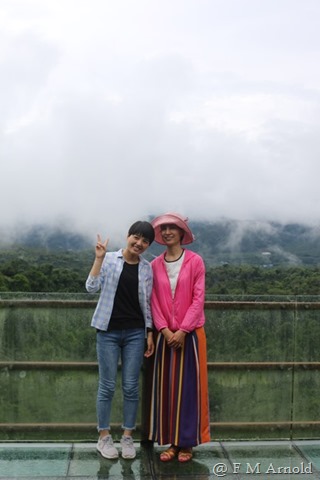 …..and we headed back down again, stopping often to take photos of interesting things along the way….. 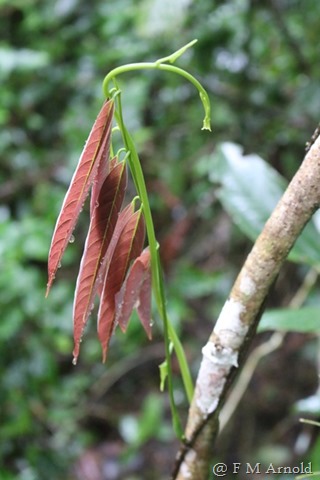 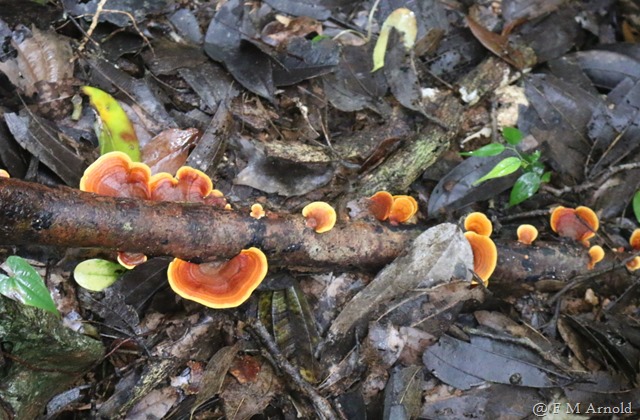 The student who was with us wore a Mosquito coil clipped onto her bag.   Since there are some cases of Malaria and Denghy Fever in the area, the researchers and grounds people often wear these to keep the pests away….. 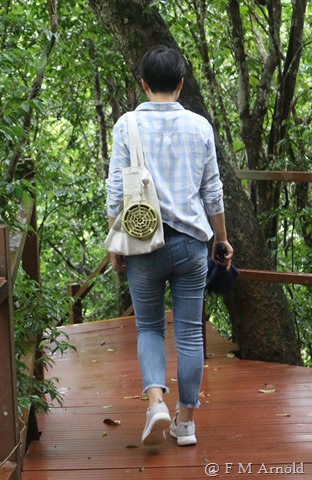 I just made it a point to stay close to her!!

There were signs of scientific research going on in the forest as well.   Here they are re-introducing some endangered Orchid species….. 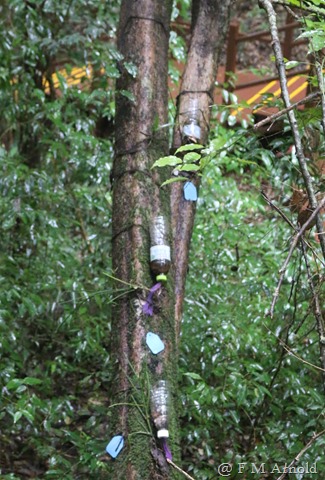 This is an area where a Bamboo plant had died.  Apparently this is a species that grows very big, flowers and then dies…..

As we walked I marveled at the way they took care of the forest so that the “people” impact was low….. 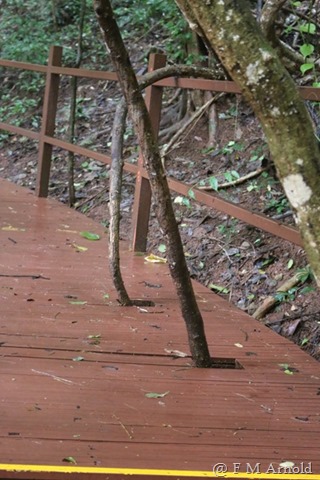 ….and to their credit, there was VERY little trash or signs that people were around!!

As we were leaving the park, there were huge groups of tourists coming in so I think that we timed it JUST right, even if it was during a storm!!

Michael and I had dinner at the hotel that evening and I braved drinking a Sprite that had been poured over ice.  We normally avoid ice because you never know what kind of water they used to make it but I had seen them pour the drink into the urn and I immediately siphoned off my glass so I am telling myself that there wasn’t time for any of the ice to melt….  only time will tell!!!! 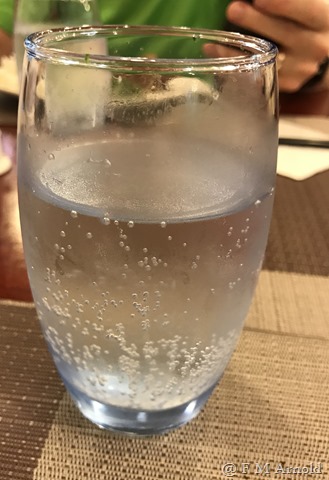 Oh, by the way……… the title of this post “28 Flights” refers to flights of steps.   My phone counts steps, miles and flights of stairs and it told me that I had climbed 28 of them before the day was over….. 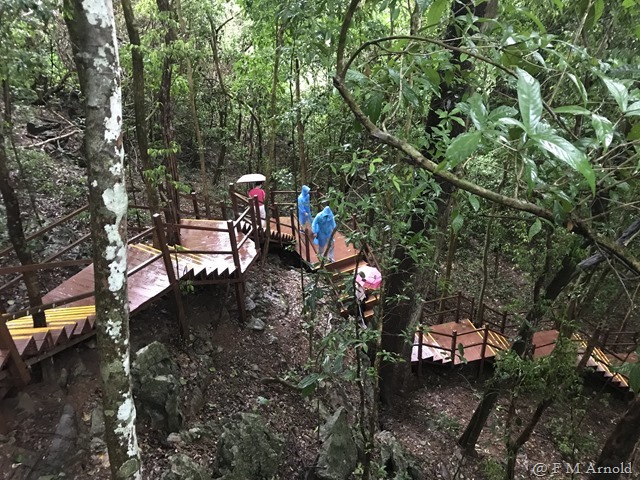 It is certainly a good thing that I have my new knee!!