Today marks the 10th anniversary of my quilting blog!!

I had originally started a travel blog when we spent 2 months in England back in 2007.  Before we left several people had said for me to email them and tell them all about the trip.   As I thought about it, I knew that I wouldn’t spend hours emailing each of those individuals so decided to start a blog and anyone who wanted could have a look at it.   After that, I did another blog for our India trip in 2008 and yet another one for our Australia trip in 2008.

Then in December of 2008, I got the idea to make ONE blog to hold all of the Arnold family exploits, both quilting and not…. and I called it Quilts & Other Stuff!!!

In these ten years I have met people from all around Georgia, the United States and the world and it has been a blast!!!  I even had one woman stop me at a local theater and tell me that she likes my blog!!

So, for my 10th anniversary post I want to tell you about some “Other Stuff” that happened this weekend…..

On Saturday, my Daughter-In-Law and I visited the Yayoi Kusama Infinity Mirrors exhibit at the High Museum in Atlanta.   Amber is a member of the “High” and was able to purchase advance tickets and was sweet enough to invite me along.

I really knew nothing about the artist but found out that she is an 89 year old Japanese immigrant who started painting when she was 8 years old.  She suffered from some mental illness and hallucinations and says that many of her pieces are designed to let others see the world in the same way that she sees it.

The excitement was palpable as Amber and I stood in line to enter the exhibit at our appointed time….. 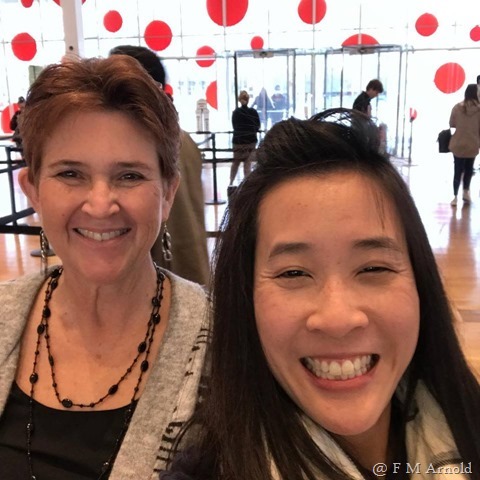 The first room contained many of her larger-than-life paintings….. 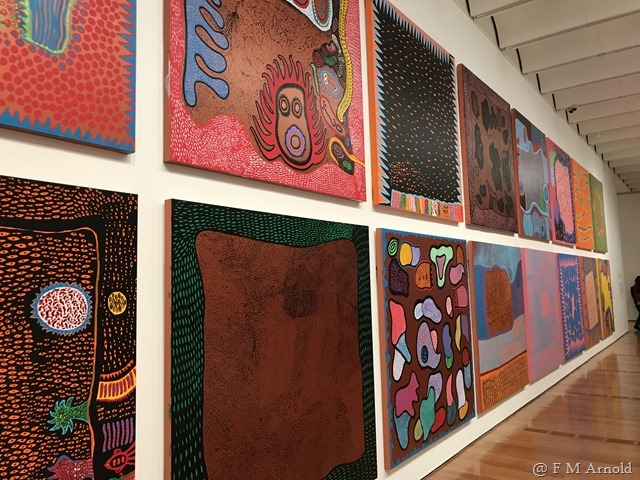 I, of course, loved the triangle borders on many of the pieces….. 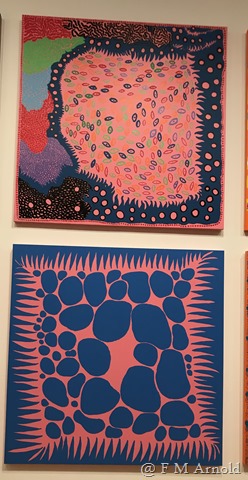 There were 7 installation pieces that required waiting in line for 10+ minutes to spend  20 or 30 seconds inside the mirrored room.   That doesn’t sound like a lot of fun, but it was a blast as we talked about what we had just seen and what we were waiting for.

My favorite room was titled “Aftermath of Obliteration of Eternity”…… 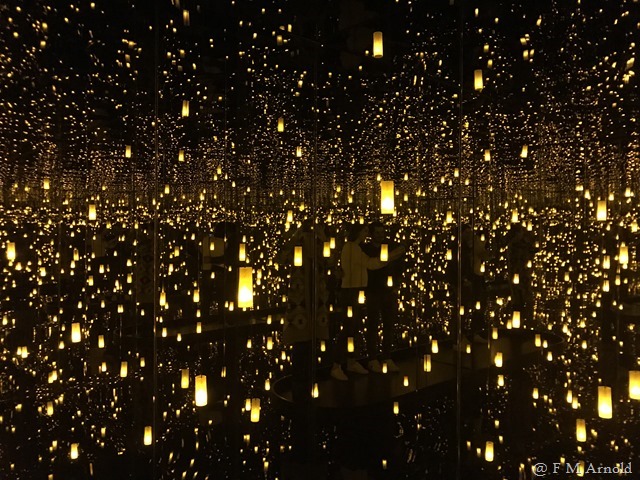 It was a peaceful room and the flickering lights were serene!!

The next favorite was “All the Eternal Love I Have for the Pumpkins”.  Unfortunately you couldn’t take cameras into this room….apparently because the glass pieces were very fragile and a falling phone or camera could greatly damage the art.     I pilfered these two photos from the Dallas Museum of Art site….. 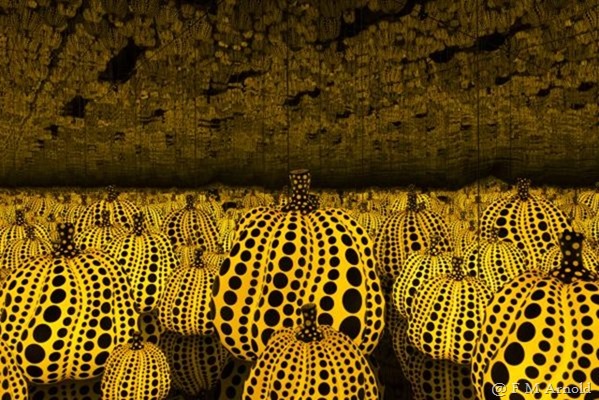 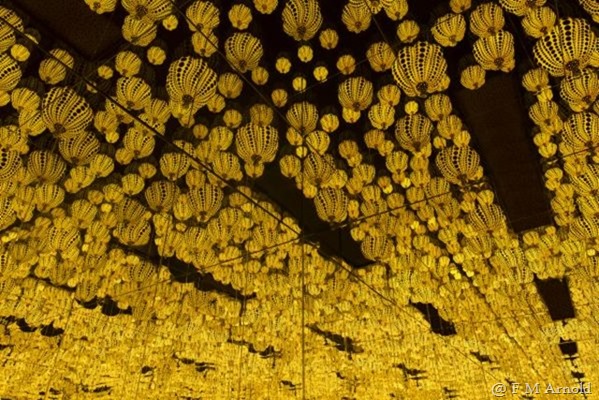 One of the exhibits called “Love Forever” had a peep hole for two people to look into the exhibit at the same time.   Amber and I had fun taking photos of each other as the lights flashed around us…… 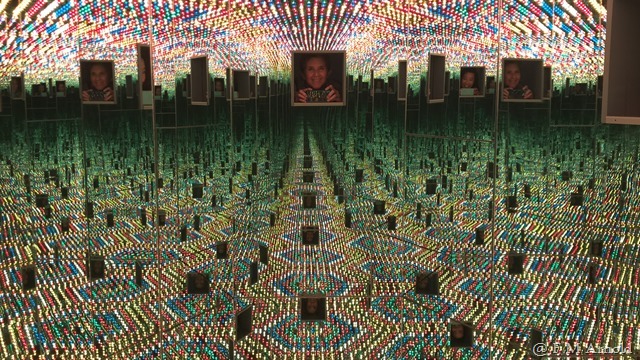 One of the cool things about the exhibits is that you are a part of it as your reflection is bounced from wall to wall!!……. 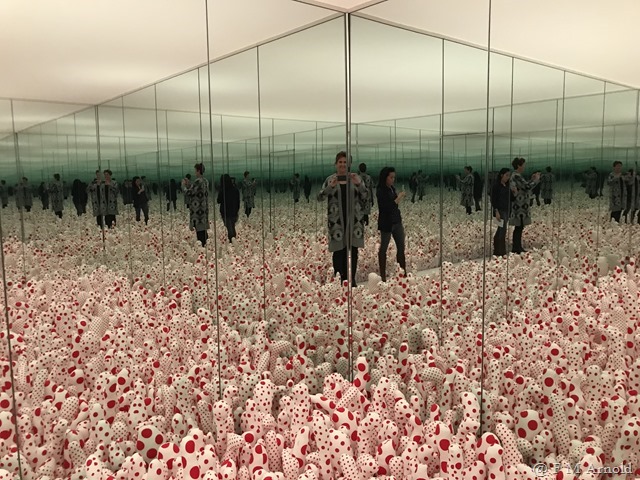 There were several galleries with some of her earlier, more traditional, art.   I especially liked this piece from 1953….. 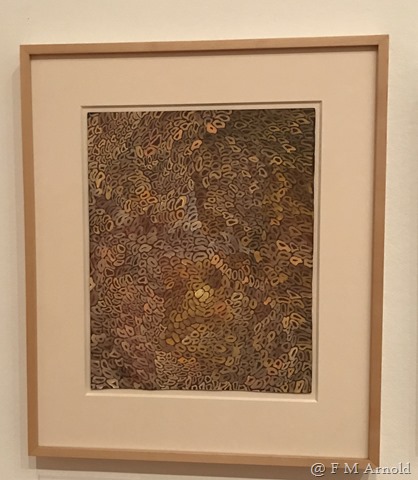 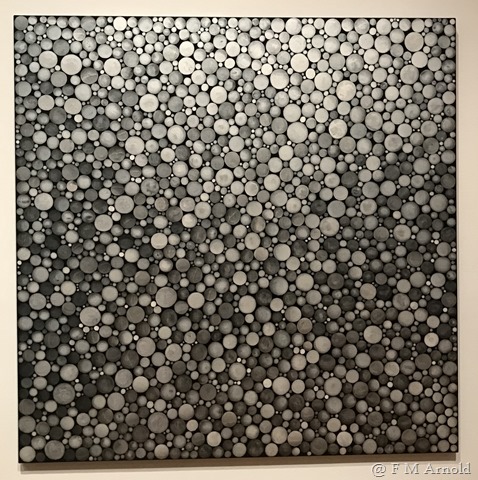 The final room was called “The Obliteration Room” and this was the sign telling about the exhibit….. 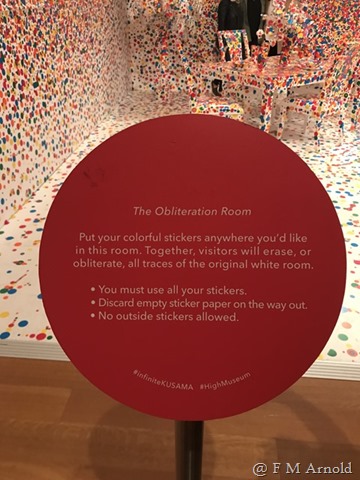 Amber and I got to participate in this exhibit by carefully placing our 6 dots in strategic places in the room….. 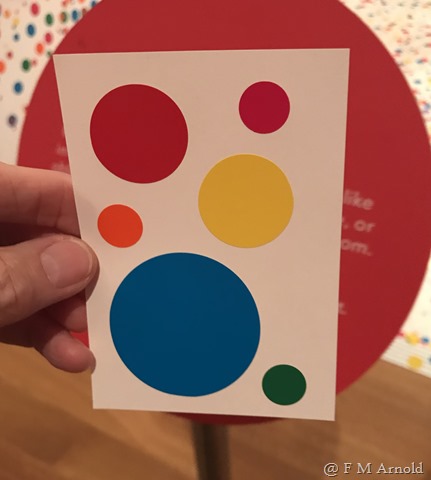 It took us several minutes to determine the exact spot that we wanted to cover.   I didn’t get a photo of it, but Amber climbed UNDER this table to place at least one of her dots…. 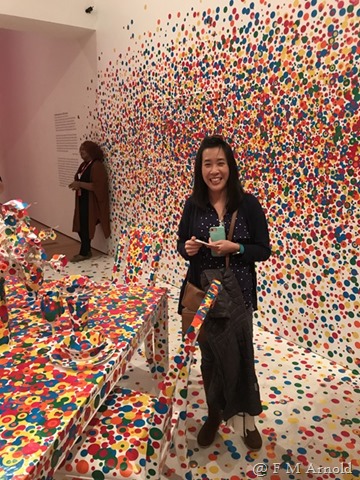 It will be interesting to see” what this room looks like when the exhibit closes in February.   I certainly hope that the High Museum posts a photo!!! 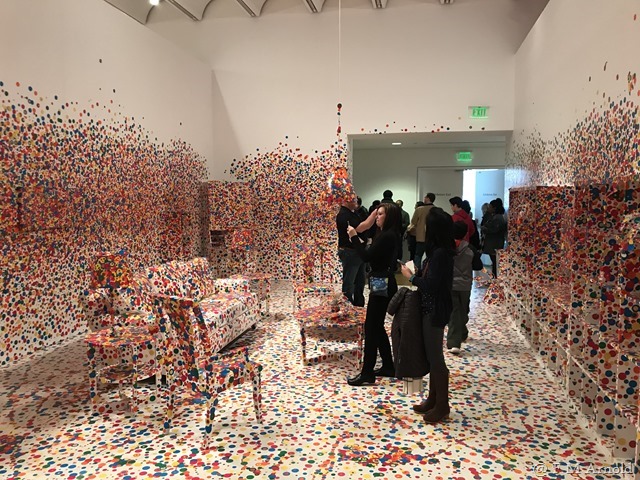 One of her quotes said….   “Everyone asks me where my inspiration comes from, but I just pick up the paintbrush and follow my hand, and the work just flows from me”.

I consider myself to be a “deliberate” artist… I don’t feel that it flows but that I have to work at it, but I am happy with the time and abilities to explore creativity.

Thanks for reading along…….

It was fun making this simple bargello quilt that reminds me of 4th of July Firecrackers!!!⁣
Follow my blog with Bloglovin