Michael got onto the shuttle at 9:30 and I started walking.  Today was all about photography….using the camera, the telephoto lens and my phone in every way that I could.

As I started out there was a slight sprinkle of rain, just enough to make me take my glasses off but not enough to ruin the morning.  It actually felt pretty nice and helped take a bit of the heat away.

My first stop was to this flower, complete with a feeding moth….. 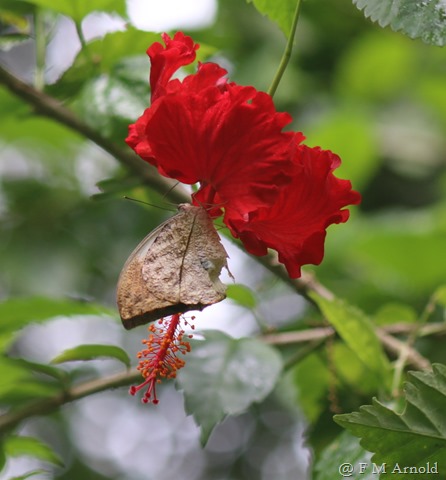 There are no bugs in this photo but definite evidence that they have been here….. 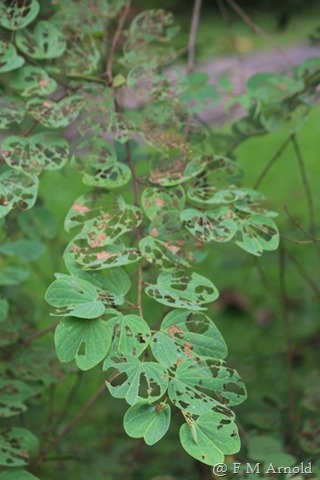 It has been really fun to use the telephoto lens as a “macro” lens and to be able to get  “up close and personal” with bees and ants without have to get TOO close.  Again, I am disappointed that I haven’t used it before now. 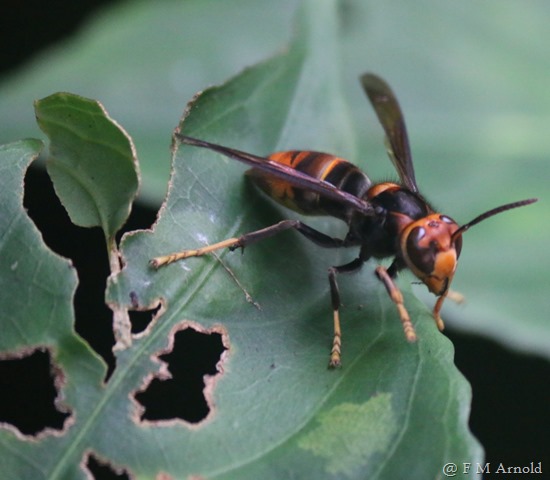 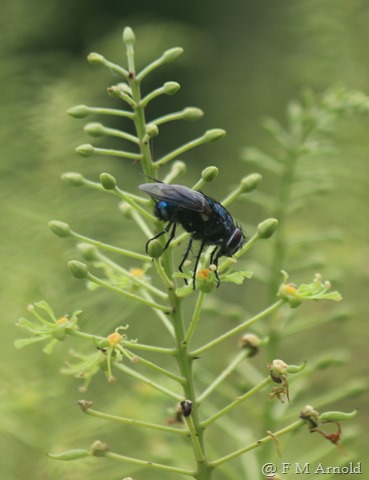 I was enthralled by the water dancing off of these yellow flowers……….. 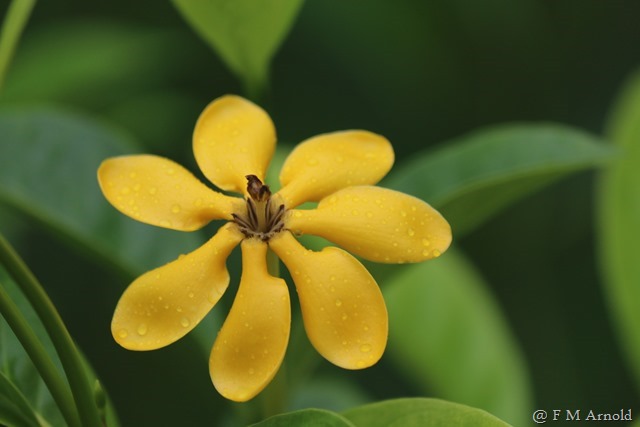 I entered one very sweet  area that had several fun vignettes…. 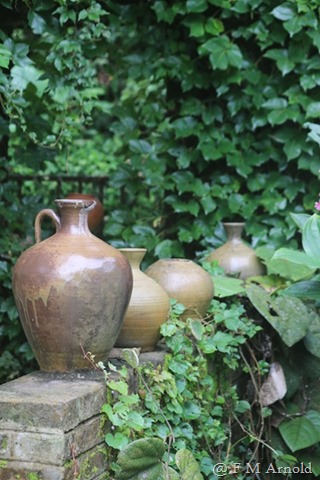 I spent about 10 minutes literally chasing this butterfly around a plant in order to get a good photo.    I honestly felt like he was mocking me, but the end, I won out!!!….. 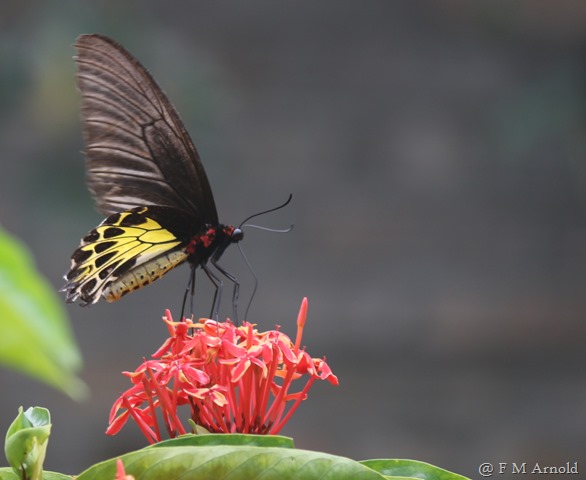 As I have been working thru the photography course, it has made me learn more about our camera and one of the first things that I learned was that I could click one switch and change it from “Auto-focus” to Manual-focus and I have found this to be so helpful.    As an example, this water plant puts out a very fine flower on a long stalk at the top of the flower.   You can see them a bit on the left, top side of the photo…. 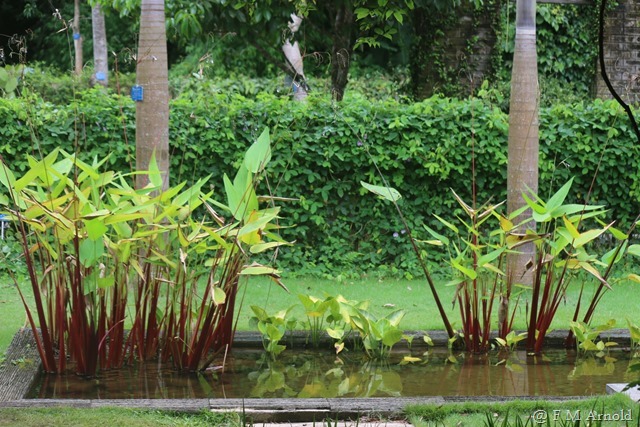 When I tried to take a photo of the flower by itself, the auto-focus couldn’t find it and kept focusing on the shrubs behind the flower.   But with one click of a button, I could use manual focus and easily photograph exactly what I wanted….. 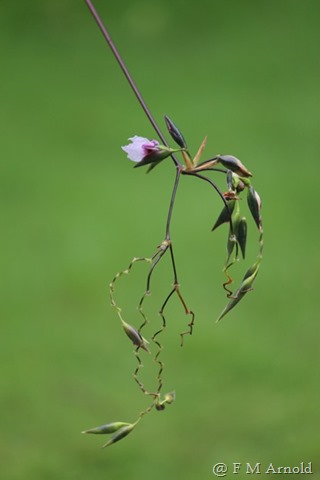 I have noticed that most of the flowers here are either red or yellow and I realized that I was highly attracted to the red ones….probably the same way that the insects are!!….. 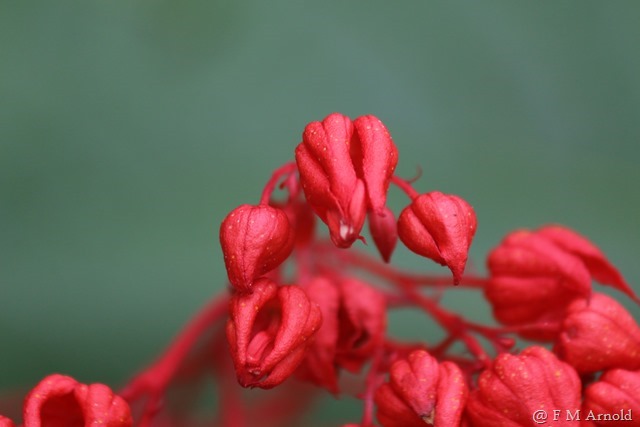 I have long been enamored with this type of flower…. 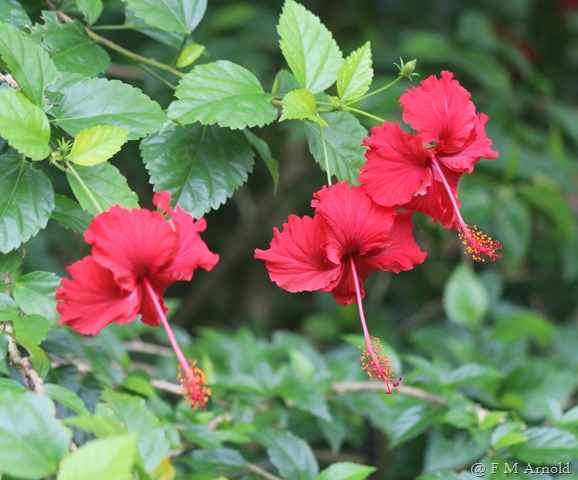 ….and even more so when you get up close and personal….. 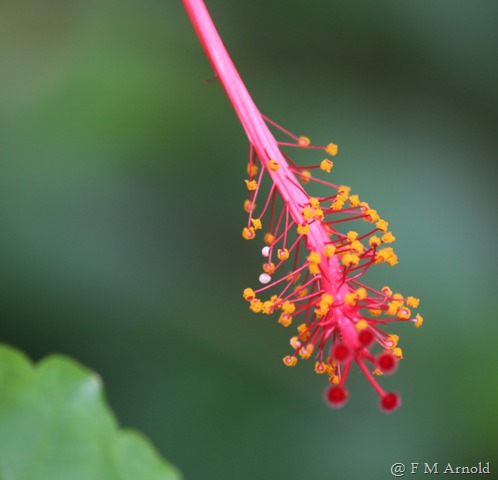 You can even see the halo from the tiny hairs that encircle the bottom blooms!

By the way, all of this photography takes time.   When I looked at the time this morning, I had already been out for an hour but had only walked 1/2 kilometer!!!  This may take a while!!

I finally reached the pedestrian bridge over the Mekong River (it is called something else in China) that leads into the town of Menglun.  The river is extremely swollen at the moment because of the overabundance of rain..… 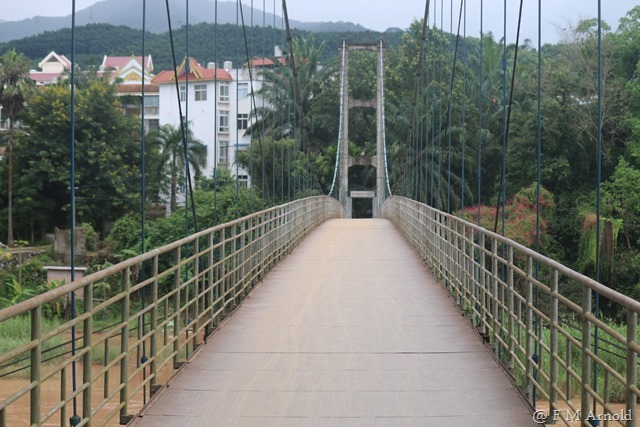 I was really looking forward to this sight because I had remembrances of walking thru the town and especially of a “Spicy Rice” restaurant that was about 5 doors after you crossed the bridge.

It was a sad sight that greeted me when I arrived at the other side….. 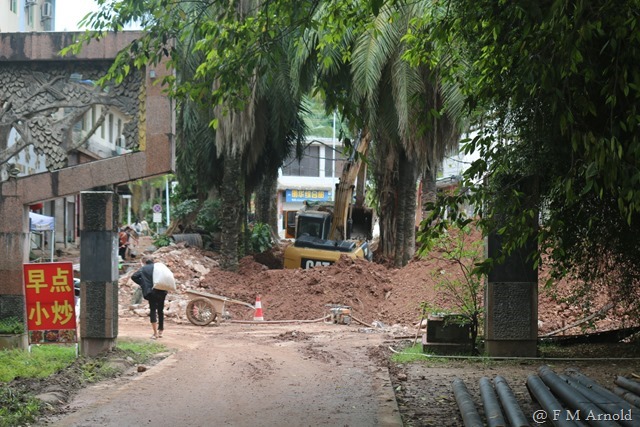 ….and found that the road was completely torn up.   Many of the shops were still there but there were no tables out so I am thinking that they are closed at the moment.  I also walked a bit into town but many of the roads are under construction and picking my way thru rocks, mud and debris was no fun at all.    I was disappointed as I quickly made my way back into the garden.

When I first saw this woman coming toward me on the bridge, I thought that she was pulling a grocery cart but when she passed, I could see that it was a different type of stroller…… 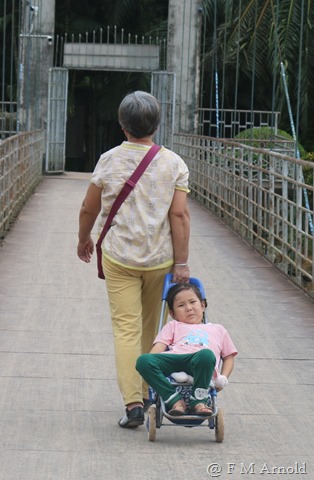 By now it was 11:00 and tourists were out in force, so I decided to concentrate on walking back to the hotel.  But, just when I thought that I was going to quit taking photos I saw a beautiful tree with pink and yellow flowers….and what’s a girl to do…… 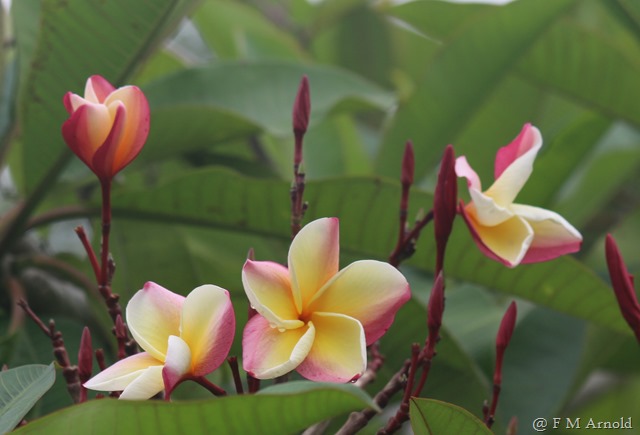 Then there were Waterlilies….. 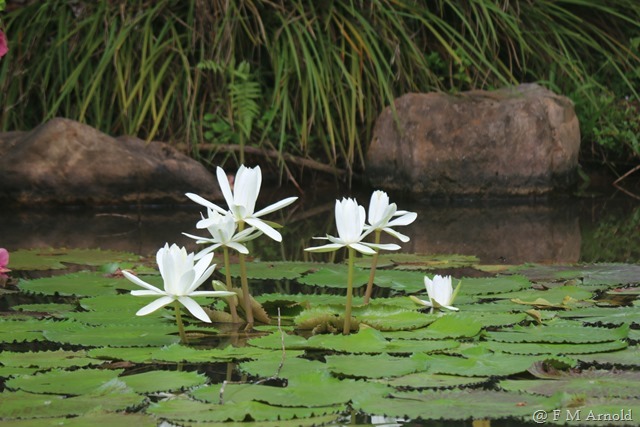 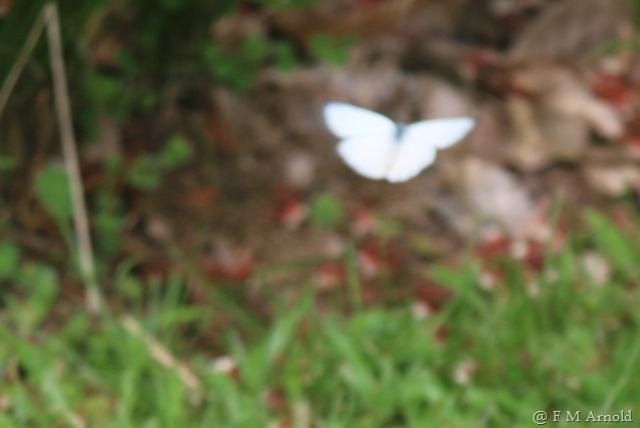 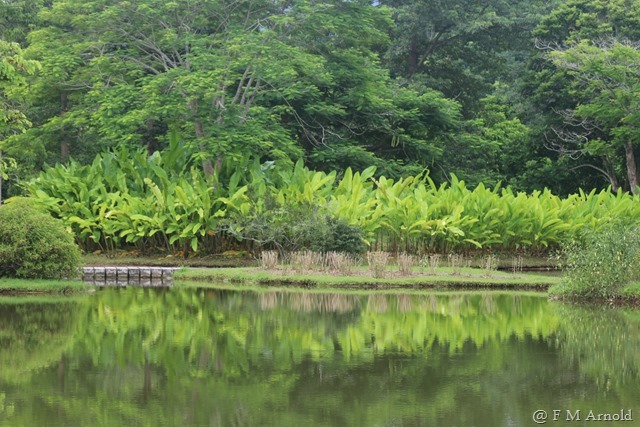 ….and more flowers with bugs…. 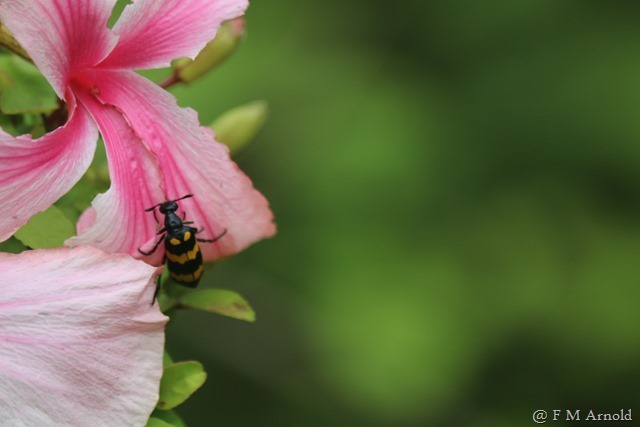 ….and then the “oh crap” moment when I realized that “You are here” was NOWHERE near where I wanted to be….. 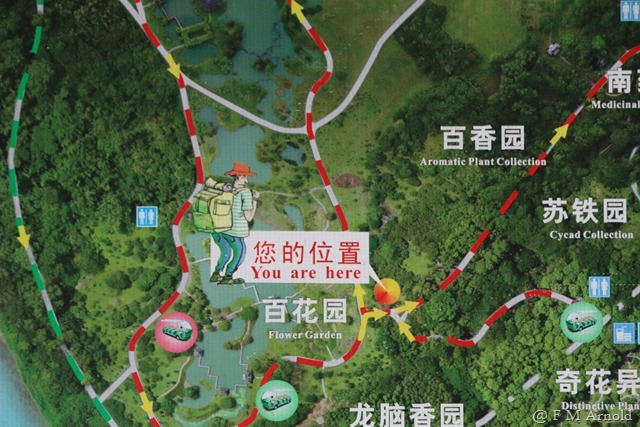 On a whim I decided to do a quick tour thru the ever-popular Distinctive Plant Garden and found this sweet boy “singing” at the top of his lungs to try to make the plant dance….. 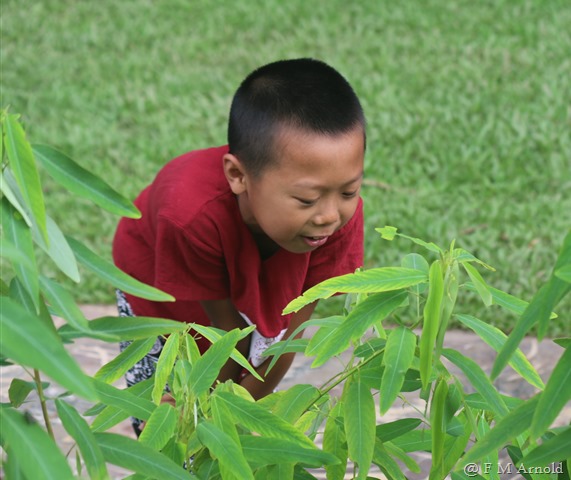 There were “Gangsta” posers galore….. 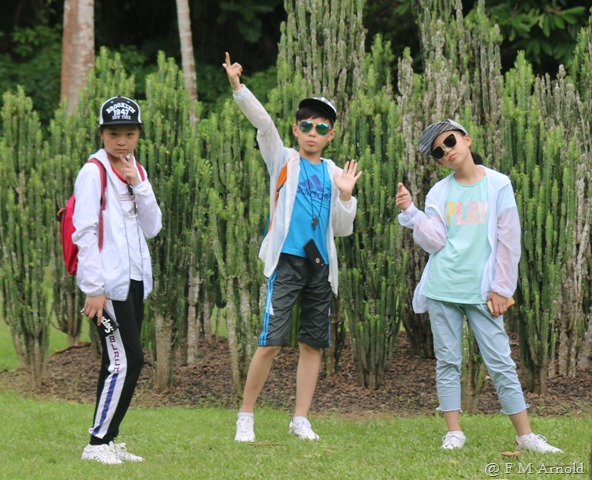 And just when I was ready to finally head for the hotel, the heavens opened and the rain came down!!!!  I took shelter, along with a BUNCH more tourists waiting for the rains to subside. 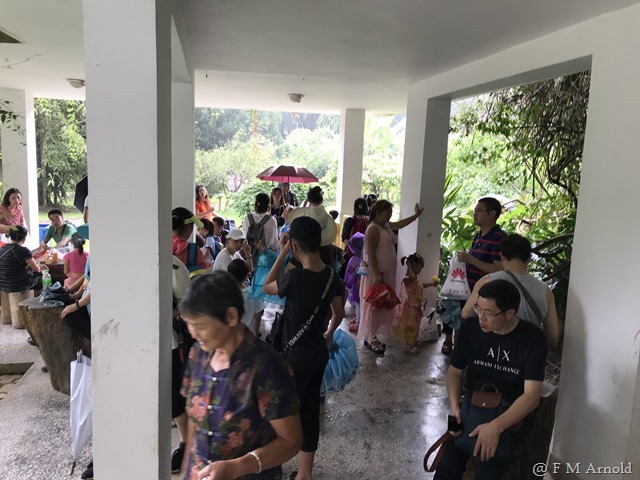 Many people used this opportunity to purchase snacks at one of the vendors located around the entrance and the cutest thing was one man who bought a coconut for his family…..one coconut and SIX straws!!!

I eventually made it back to the hotel and spent the rest of the afternoon going thru two more lessons of my photography course and running outside (between showers) to test out what I was learning.  The first lesson was about shutter speed and the idea of slowing the speed down to let in more of the ambient light.  I spent some time taking photos of one of the waterfalls, starting off with a fast shutter speed so that you can almost see the individual drops of water….. 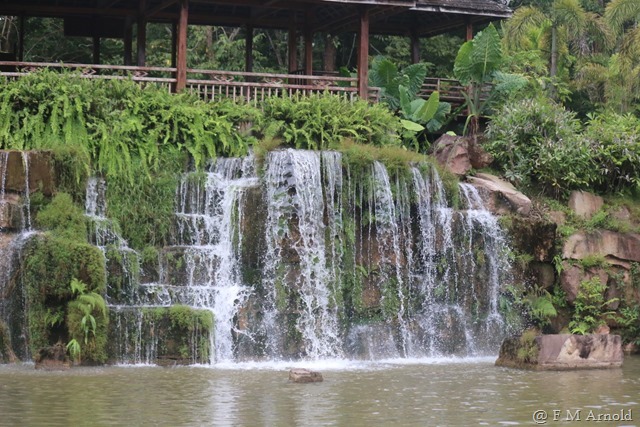 …and ending with a slow shutter speed where the water appears more as a sheet…. 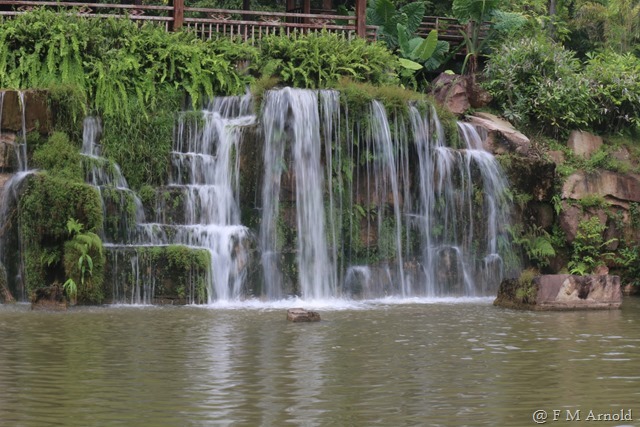 These would be better if I had the camera on a tripod  but I was happy with what was accomplished with holding the camera.

The evening ended with a banquet….. 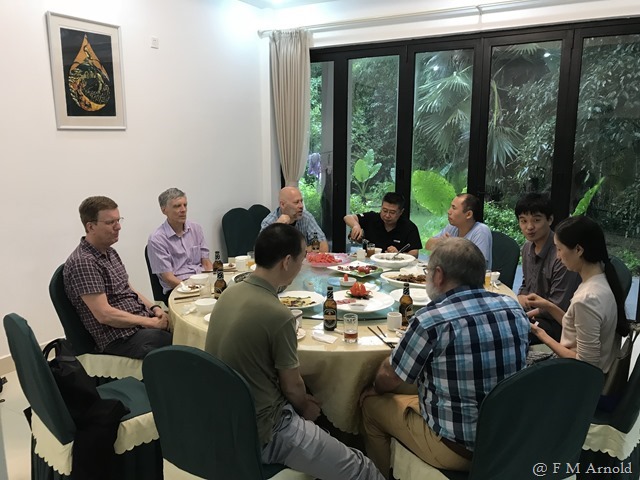 ….consisting of many wonderful foods.   One of the most interesting were these cucumber slices that were served with sugar….. 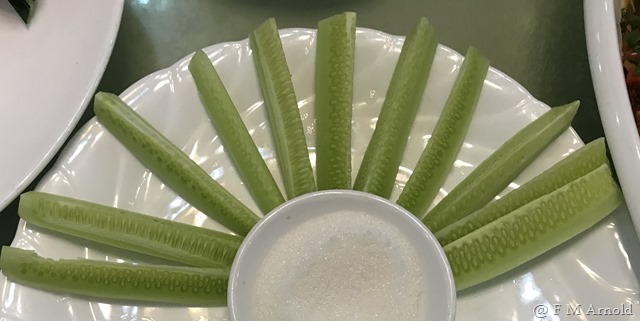 I am not a huge cucumber fan but these were delicious!!

A quick tram ride back to the hotel and the day was over!!!

2 thoughts on “No whale petting today…..”

Celebrating our freedom on this 4th of July!! ⁣
Follow my blog with Bloglovin