Before I start this post, let me say that I do NOT like making Tee-shirt quilts and I avoid them at almost all costs.  However, when your wonderful Daughter-In-Law asks if you will help her make one, you  say yes, smile broadly and look forward to spending time with her!!

Amber is an Art Teacher at an Elementary School in Gwinett County, just outside of Atlanta, GA.  It is a large school and she sees around 900 kids every single week!!  I am amazed with the way that she encourages them to not only learn about art but to practice it as well.   She encourages her students that  “Can’t isn’t a word” and “If you make a mistake, make something new out of it”.

Last year she was accepted into a program called “Art 21” which works with 21 teachers from North America and it was a true honor for her to be included in this group.  She spent a week in New York City, studying modern art and learning how to include it in her curriculum and then worked with her mentors for the following year adding even more to her teaching repertoire.

As part of her teaching, she runs an extracurricular art club to further encourage the students who have a deeper interest in art.  Over these 10 years of her teaching career the art club has had one or two tee-shirts each year with many of them being designed by her students.   These shirts were the base for our project.  We started out by laying out the shirts that we thought would fit together….. 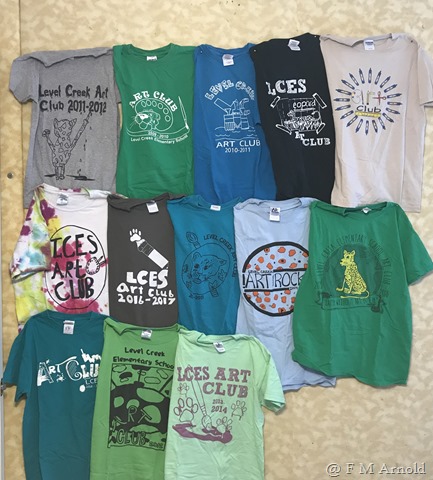 We were both happy with the colors but realized that we needed a few more shirts to add some “pop” to the piece.  We added a few other shirts and were ready to go.

We had originally talked about interspersing cotton fabrics among the tee-shirts, but I had listened to a pod cast where they talked about only using tee-shirt fabrics so we decided that was the way to go.

While Amber cut the shirts apart….. 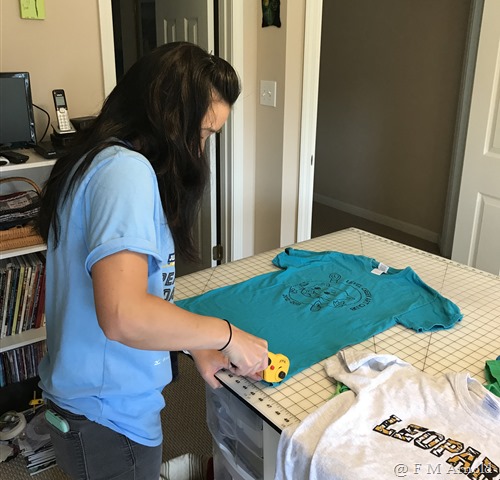 I started ironing the fusible interfacing to the backs….. 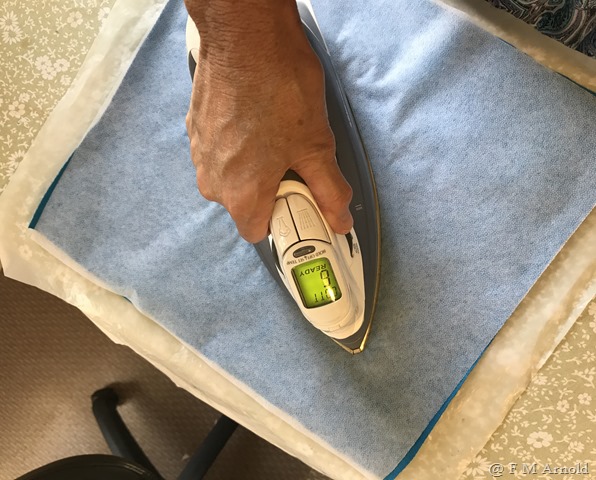 Then came the fun of cutting out the shirts and placing them on the design wall.   We started out cutting everything larger than we thought it could be and throwing them up on the wall, first just to see what we had.….. 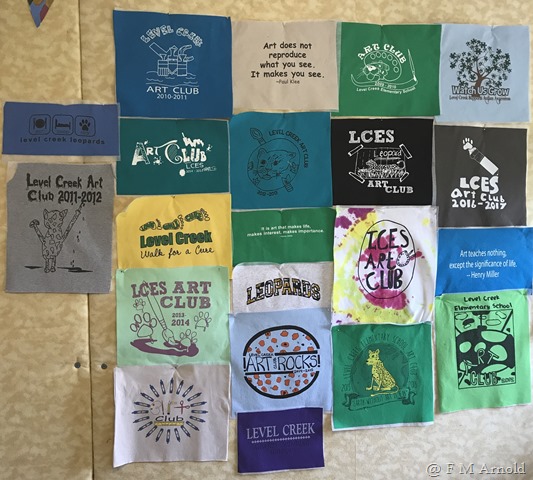 And then beginning the arrangement process….. 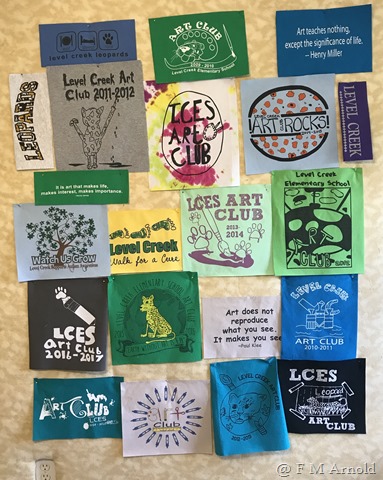 There was lots of standing back and pondering….. 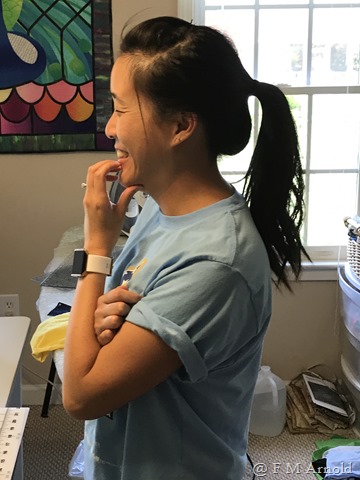 And moving shirts hither and thither…… 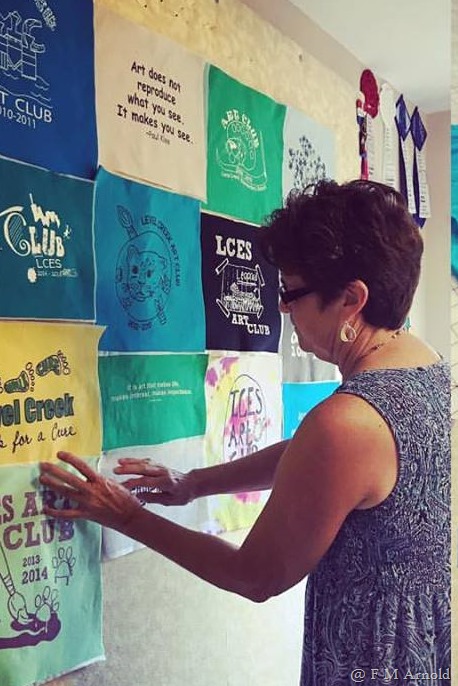 At the end of the day we had a full fledged plan….. 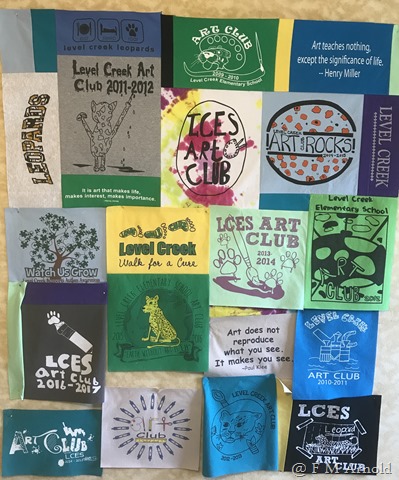 … and the sewing started on our next day together.  Amber sewed while I tried to figure out how to put the pieces together with a minimum of Y-seams…. We started out using a 1/4 inch foot but the shirts crawled too much so we moved to the walking foot.   It was the perfect tool for the job.

At the end of the day, we had the top together and ready for a border….. 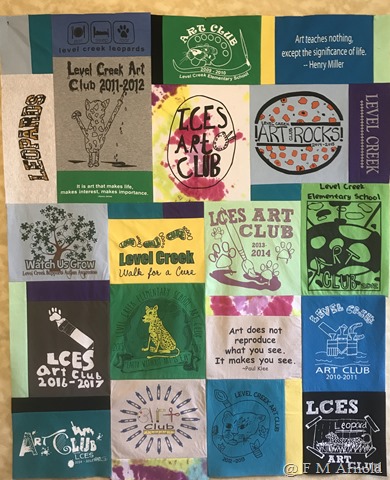 We had decided that a dark grey border would be perfect and Amber had offered to purchase the fabric.   Unfortunately, the only thing that she could find in the appropriate color was a super thin tee-shirt fabric.  We debated about trying to find another heavier fabric but instead decided to fuse two pieces together to make a heavier fabric and then add the fusible.   It was a bit labor intensive…… 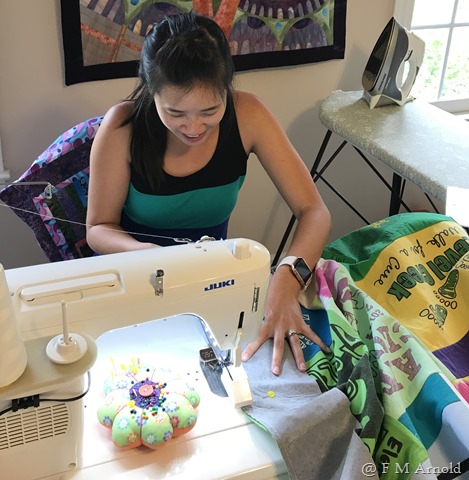 …..but the result was wonderful…. 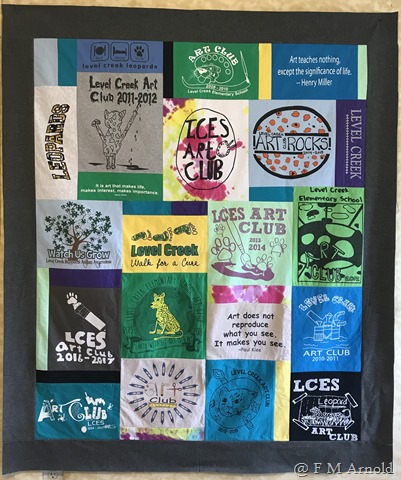 We made a back and now it is ready to go to a friend for quilting.

When finished, Amber plans to hang it behind her desk and use it to further encourage her students.

Several of her friends asked if I would make a tee-shirt quilt for them and she gracefully acknowledged that it was a “daughter-in-law perk”!!

I had a marvelous time spending those 3 days with Amber and hope that we can work on other projects in the future.

She starts classes tomorrow and I wish her the best for a wonderful year!!!

The Kerala Backwaters of India provide creative inspiration. Follow the link in my bio for more about this fun area of the world!!#francesquilts #quiltinspiration #quiltblock #quilt #quilting⁣
Follow my blog with Bloglovin