Back in January our Guild was presented with a challenge that was due at the June meeting.   It was billed as the “Idiom” challenge and the rules said to make a 24×36 inch quilt that represented an idiom.  The quilt could not have borders and must have a recognizable amount of black and white fabric.

My initial thought was that I didn’t want to do the challenge because I could only think of “cutesy” ideas and didn’t want to make that big of a quilt that would never hang on my walls.  So, I pretty much forgot about it!!

Then, back in February I was having lunch with my “Creative Group” and we were talking about how bad the winter weather had been.  One of the members showed a photo that her son had taken to prove just how much snow had fallen at his house.   When I saw the photo, I saw a single tree trunk in the middle of a snow drift with a horizon line and a forest of trees in the background.   When I asked the woman to share the photo, this is what I received…… 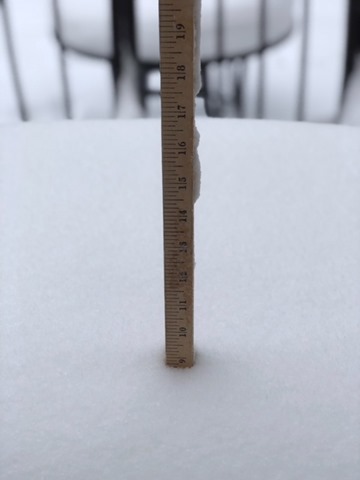 …..a yardstick stuck into the snow on a table and something in the background….probably the back of a deck chair.    Yikes, is this really the photo that inspired me!!!

That evening, as I was playing around with the photo and thinking about the size of the quilt, I realized that it could EASILY be turned into a 24×36 inch quilt which would fit the challenge rules.    But, I still needed an idiom…. so I hopped on the internet and Googled “idioms and snow” and up popped “SNOWED UNDER”….the PERFECT name for this planned quilt!!!

I started on the quilt top by marking a 24 x 36 inch onto my design wall and laying out the possible fabrics….. 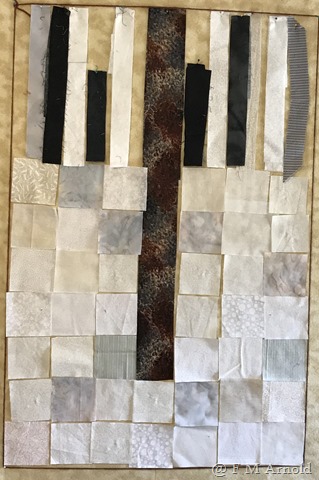 The next task was to “free-piece” the snow background.  This particular section started out by piecing a nine patch….. 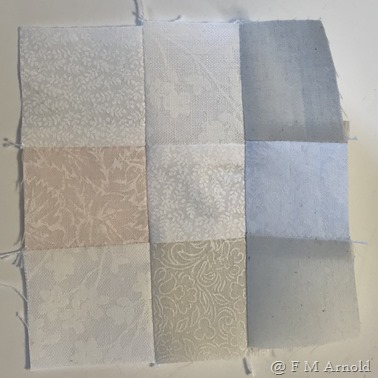 ….and continuing to add pieced segments until I got it to the size that I wanted…… 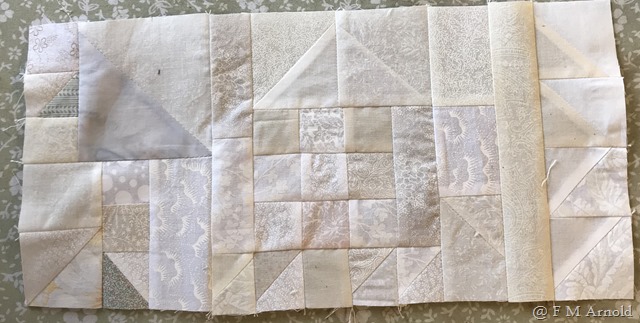 …..and then added it to the other sections already on the wall…… 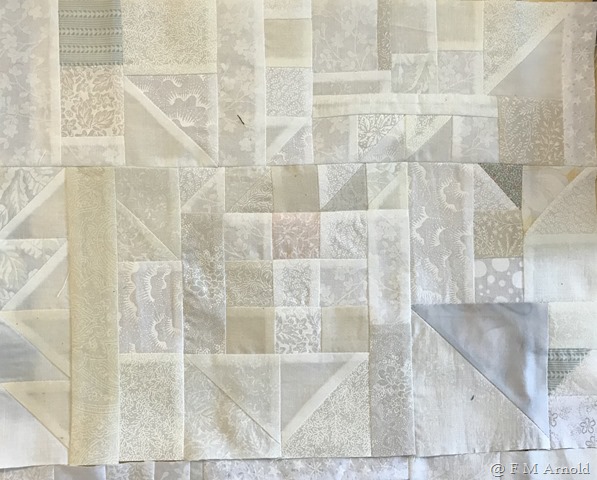 After I had the snow bank pieced, and as I was trying to decide what to do with the background trees, I looked thru some photos that I had saved as inspirations and decided that, like this photo, there needed to be some tree shadows….. 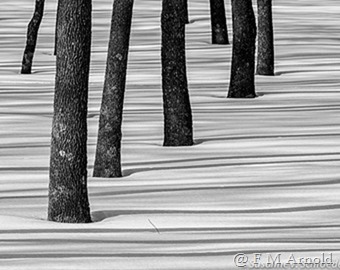 I briefly thought about painting the shadows but then remembered a banner that I had photographed in Scotland where netting was used to provide shadows on buildings….. 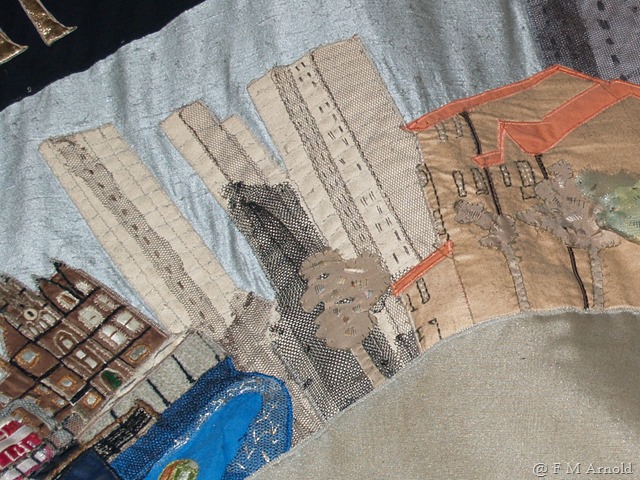 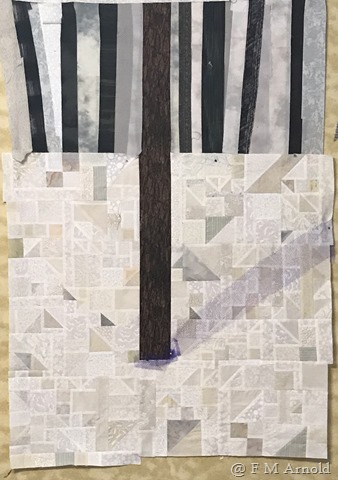 I immediately liked how it looked!!

Now it was time to start quilting, so I did some sample quilting (with a pen) to see which I liked best….. 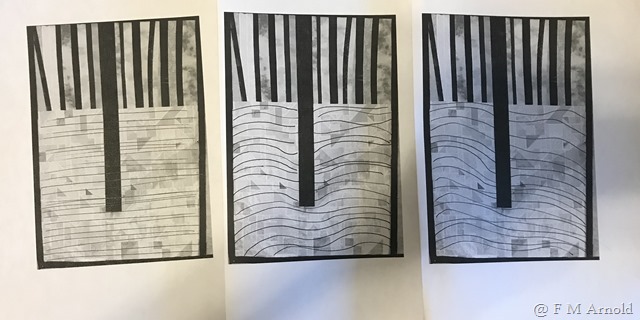 I picked the middle one and drew one blue line to use as a guide for the echo quilting, and off I went!!

While outlining the tree, I accidently hopped off the white and onto the tree trunk, leaving a VERY noticeable line.  Now I could have taken the stitching out but instead decided to cover the white line with a dab of from a brown Fabrico Marker.

Unfortunately the next thing that I did was to pull out my spray bottle and liberally spray the blue line to remove the mark, AND, you guessed it…..the brown marker hadn’t dried yet and it bled onto the white fabric….. 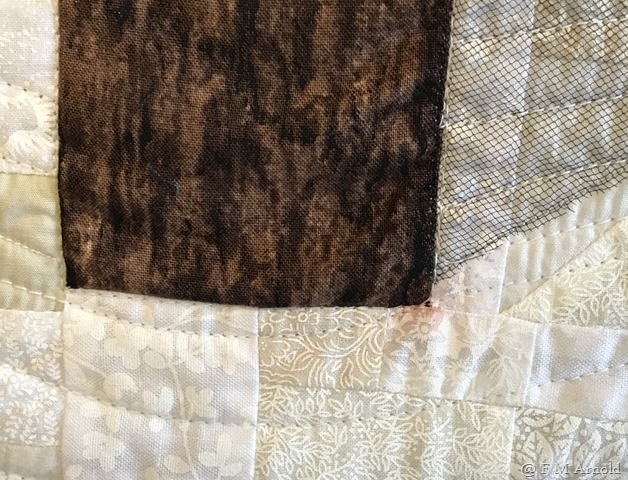 It wasn’t much but was enough to ruin the piece and I was horrified!!   As I finished quilting the trees, I tried to think of ways to fix the bleed mark and had basically decided that I would need to take out some of the quilting and applique another piece of white fabric over it….SIGH….so much work!!!

But then I had the wonderful thought…..I wonder if I could paint over it????? 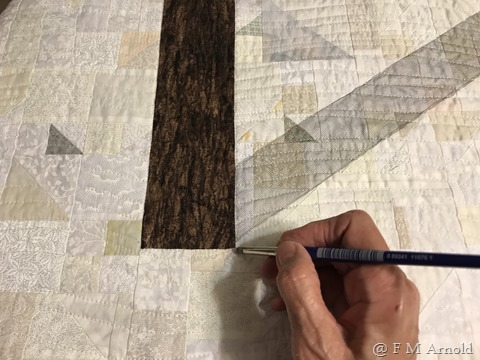 I am extremely happy with the quilt and had a marvelous time working on it….. 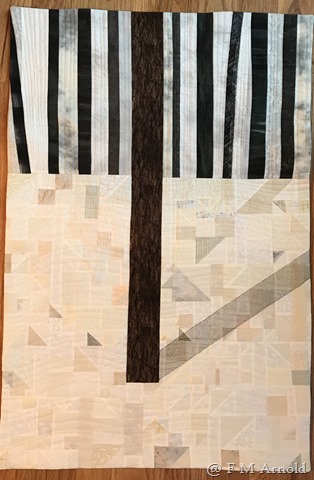 4 thoughts on “Feeling “Snowed Under””

The Kerala Backwaters of India provide creative inspiration. Follow the link in my bio for more about this fun area of the world!!#francesquilts #quiltinspiration #quiltblock #quilt #quilting⁣
Follow my blog with Bloglovin