On Saturday Michael wanted nothing more than to have a long walk, something that he had not been able to do all week long while he had been teaching.  So we set out to try to find the Antique market that I had searched for on Friday.  We both had in our minds that it……

1.   was on the right side of the street as we were heading away from the hotel,

So, off we went, walking down Renmin Road.  After about 2 miles, we decided that we were obviously not on the correct street!!  Since the major streets run in concentric circles around the city area, I suggested that we take a perpendicular road to the next ring out and walk back home that way.  It ended up being a good choice!!  About 1/2 mile onto the new street and we both (at the same time) pointed across the street and said “THERE IT IS!!!!”.

We excitedly crossed the street, entered the maze of shops and then stopped short because almost all of them were closed!!  We are not sure if they open later on Saturday, or maybe not at all on Saturday, but we marked the position in our minds and have vowed to go back on a normal week day!!

AND, to add insult to injury, the building was about 200 yards from the CarreFour that I had visited earlier in the week!!!!!

As we walked, we came across an area of the town that is being refurbished but is trying to keep the old character of the area…… 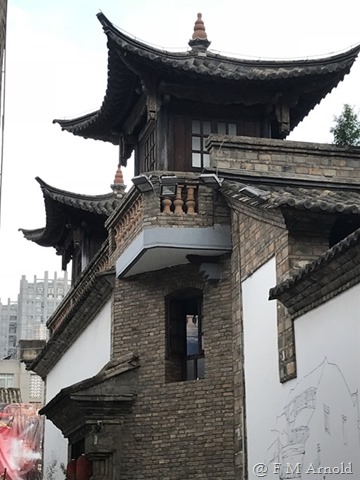 I loved these doors…… 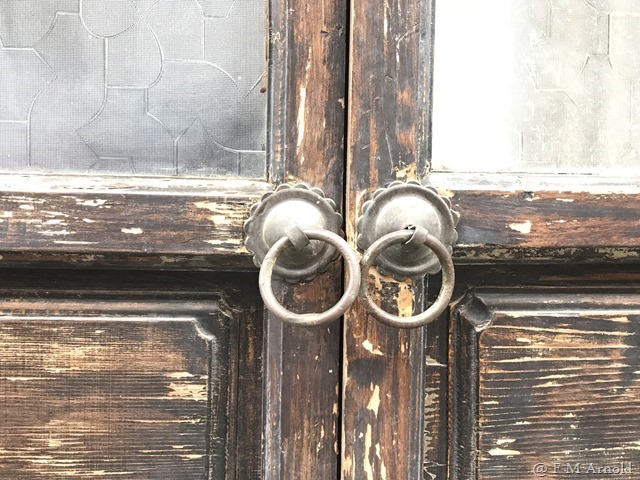 We spent the rest of the day just relaxing and letting Michael enjoy some down time.  In the evening he had a fun interaction with a family that was in the hotel for a 100 day party for a little baby….. 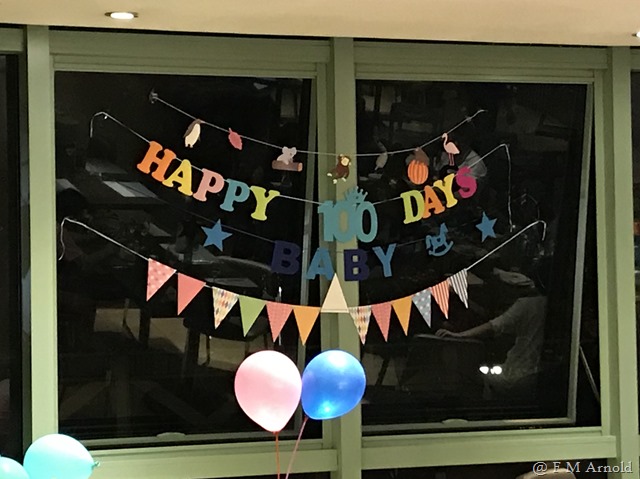 Michael was sitting out on the balcony next to the dining area and this party was going on inside.  One of the guests came outside and introduced himself to Michael and told him that the 100 day party was a really big deal.  He also brought out a partial bottle of wine to allow Michael (and myself later in the evening) to join into the celebration.    There were many people there and we figure that this one night would have cost thousands of dollars…..and for a baby who didn’t know anything about it.

The decorations were all blow up animals and balloons and this one little girl came out with her Unicorn and paraded in front of our table……. 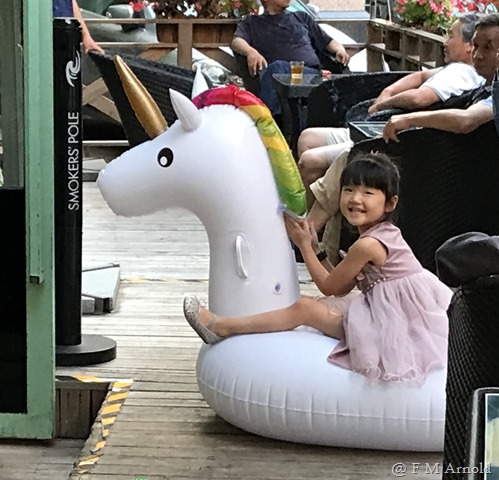 Michael asked her “what do you call that animal?” and she gave him an incredulous look and said (in perfect English), “It’s a Unicorn”!!   We are pretty sure that, in her mind, she added “Dumb A—“  to that statement.   Later in the evening we talked to both she and her Mom and were amazed to find out that she was only 4 years old.   We predict that she will go far!!

On Sunday afternoon, we flew to the city of Jinghong and were picked up by Gang, the researcher who is organizing the next week of our trip.   He walked us to the car and we proceeded to drive an hour to the town of MengLun and the Xishuangbanna Tropical Botanic Garden.

Now you know me and peacocks…..  I took SO many photos trying to get a picture of these fun city decorations…..

The “tropical” part of the area showed itself as we drove with ominous clouds swirling around us….. 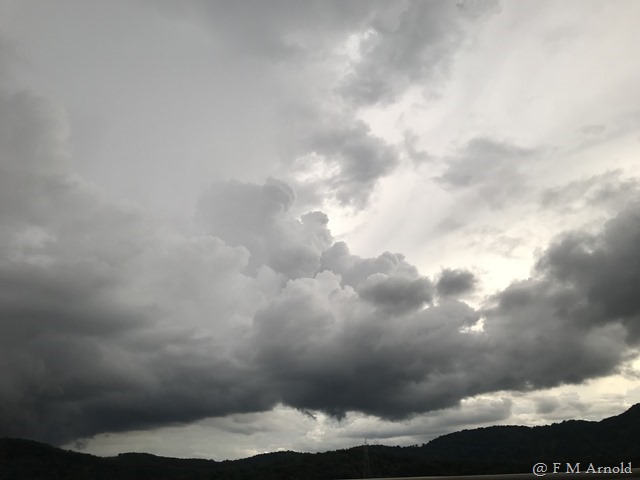 Gang knew that we loved spicy food and he was determined to give us a good first meal!!  The driver of the car suggested a restaurant, so we picked up another researcher from XTBG and headed to the restaurant.     Most restaurants in China have individual rooms where groups will sit around a big round table and enjoy their meal in privacy.  Unfortunately there was only one individual room left and it literally was a “Hole in the Wall”…….. 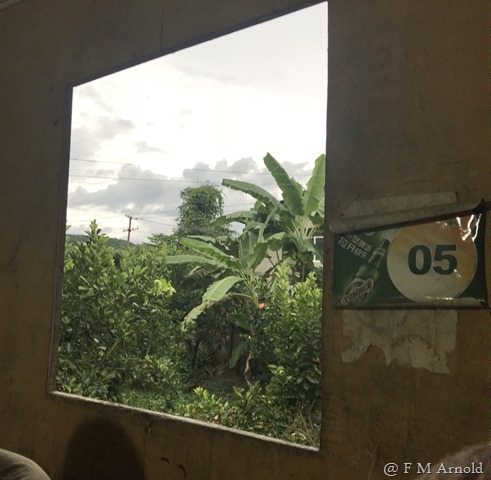 ….not just this “open to the world window”, but also several large holes in the bottom of the wall!!

As usual in a place like this, the food was magnificent, starting with tiny deep fried fish and were spicy, crunchy and wonderful…… 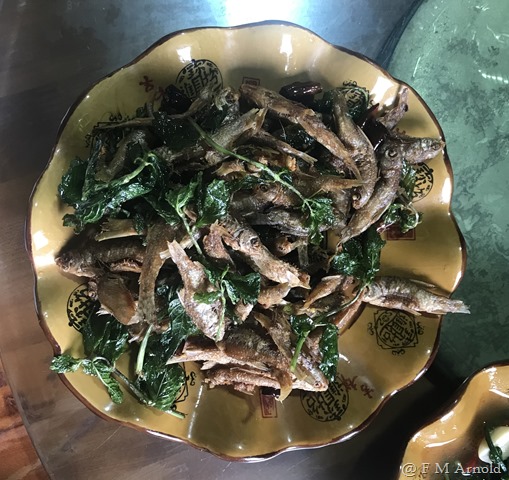 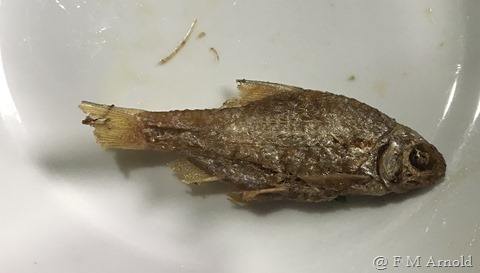 As Americans, we don’t tend to eat this delicacy, but we have now enjoyed them in Italy, Portugal and China.

Other meal highlights included  a tasty Bok Choy and another green veggie with tomatoes….. 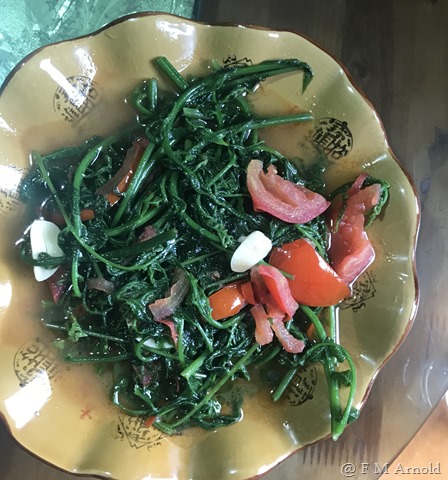 We also had a fish soup that had a whole fish in it….. 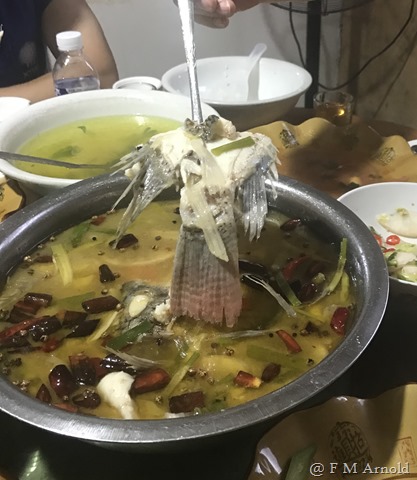 and lots of Sichuan pepper corns.   These little fire balls not only have a pepper flavor but also a bitterness that adds to the heat.   I tend to avoid them while Michael picks them out so that he can have more!!!

The most interesting dish was a vegetable that was a mix between a green bean and an okra pod.   It didn’t have a lot of flavor by itself, but when you dipped it into the salsa, it made all of the difference in the world….. 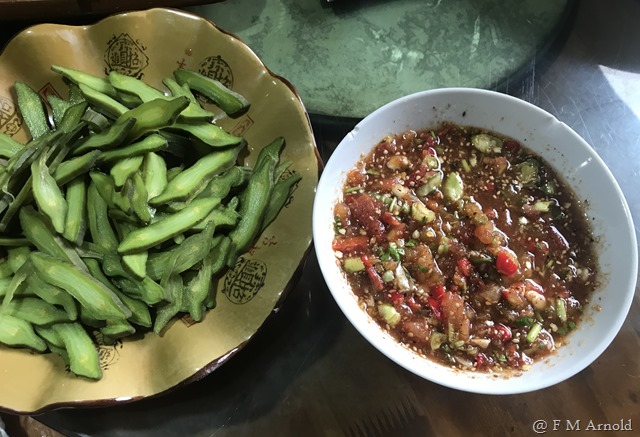 I think that the Salsa would have been good with a bag of Tostitos.

I enjoyed watching our driver eat the spicy foods.   Apparently he enjoyed eating them but his body couldn’t tolerate the heat.  There were times that his entire head was sweating and he was constantly mopping it with a napkin.

We finished the trip onto the Botanic Garden property and checked into our room at the Royal Waterlily Hotel…… tomorrow starts a new week in a new place!!!!