Since it wasn’t raining today, I decided that I wanted to take a long walk and I didn’t really care where.   I got onto Google Maps on my computer and, while exploring the area, found two art galleries listed.  I thought that those sounded fun so I set my course for the first one.

As I started out, it sent me down a new street.  My initial thought was that it was fun to see something different,  although, different  here is still much the same!!

It was a great walk and I arrived in the area in about 15 minutes, but there was no noticeable Art Museum, only a lot of construction!  So let’s head for gallery number 2…..

The area that I now walked thru was not as glitzy  and passed lots of little shops, each selling only one type of good.   One shop only sold combs and brushes. 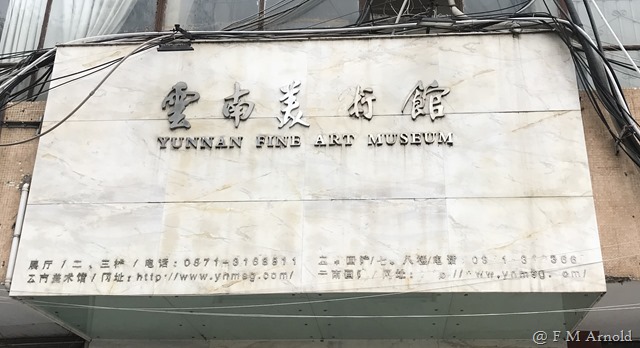 …..thinking that I had indeed found the desired gallery.  But disappointment ensued as I climbed flight after flight of stairs and only found offices and bathrooms…..no art in sight!!!

Okay, let’s head for the next destination….. When we were here in 2012, we had found a fun “antique” market and I thought that I had found it on the map so decided to find it.  After another 20 minutes of walking I found only a cavernous, empty building.

Strike 3 and I was heading home!!!

But all was not lost for the day.    As I walked, I passed a small park that had numerous military monuments.  Several were very interesting….. 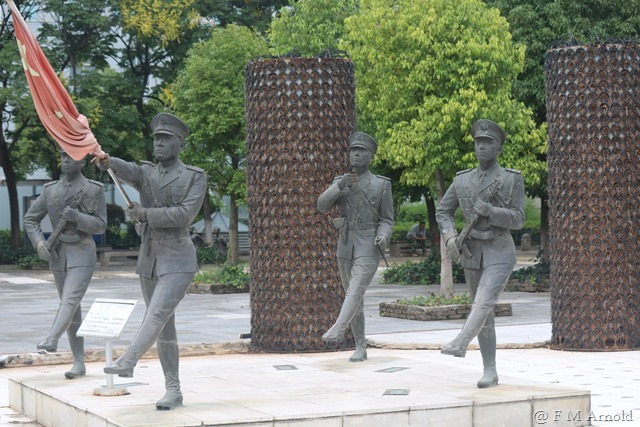 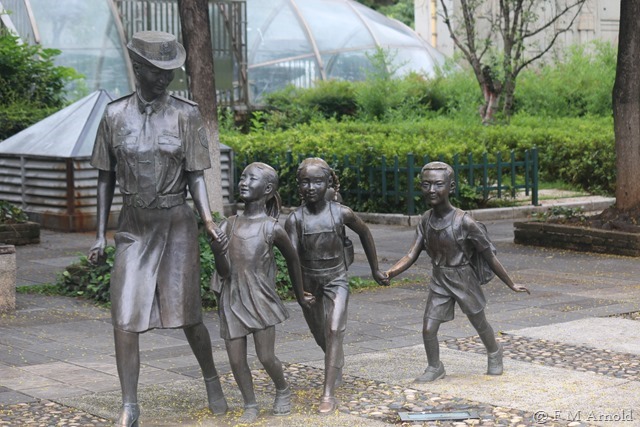 I loved this design and can see using it on a quilt someday…..

Speaking of quilting patterns, I really like this iron pattern around one of the tree beds….. 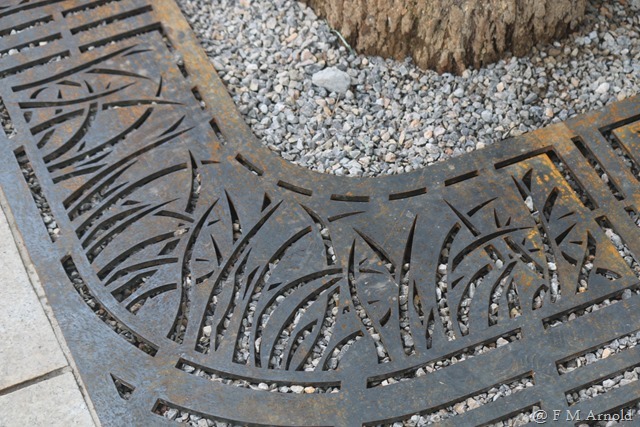 I enjoyed watching this man walking down the street with his wagon of vegetables trailing behind him….. 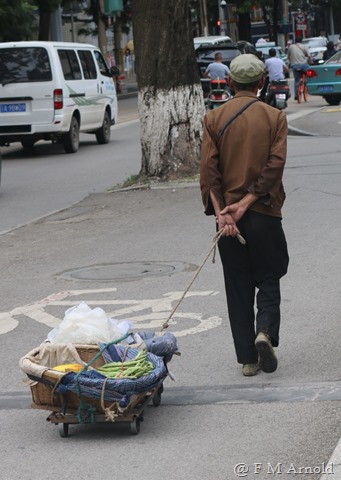 These two scooters were fun to watch….  Apparently the front one was not working and the rider was “walking” it down the street.  The back driver would slowly catch up with the first one and give him a gentle push.  They were actually moving fairly well!! 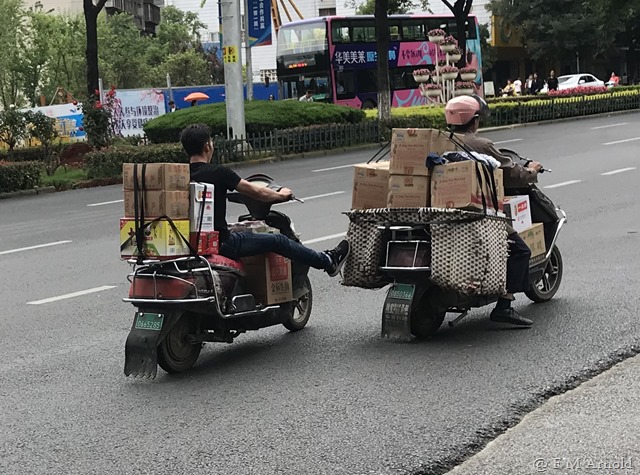 While on this walk, I did remember that the easiest way to cross busy streets is to stand next to a local and, when they start, you stay right beside them.  We used this same technique in Rome by finding an old Italian Grandmother because no one wants to run over her!!!

As I neared the hotel, I passed a small opening to a park area and could see lots of people sitting around inside.  I decided to check it out and found table after table of people (mostly men) playing traditional games…. 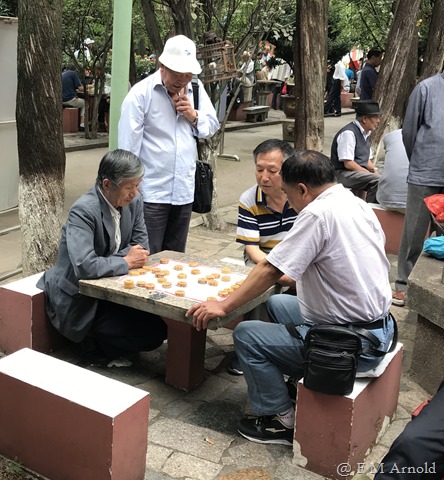 I walked thru the group and on toward what I thought was the end of the park.  Instead I reached a bridge that led to a large complex of buildings that looked very much like a Buddhist temple.  The only difference from the ones that I had seen was that there wasn’t a huge crowd of people milling around.   So, I decided that it was no longer in use as a place of worship.  But, it was still a great place to take photos….. 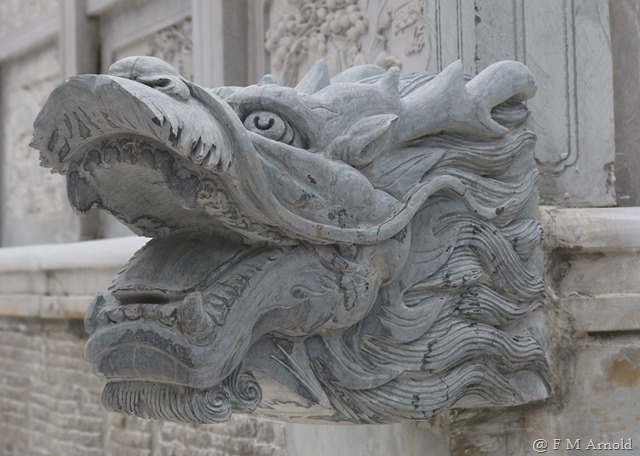 ….especially of the gorgeous and colorful designs that adorned the walls and ceilings…. 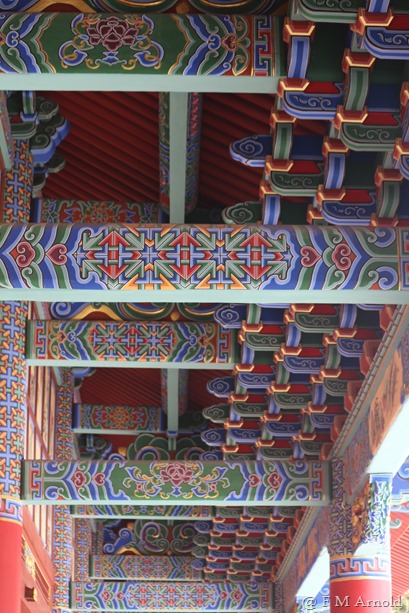 I spent a long time inside the building taking photos and enjoyed the peacefulness of the place.

Although there were no Buddha’s present, it was obvious that offerings were still being made there….. 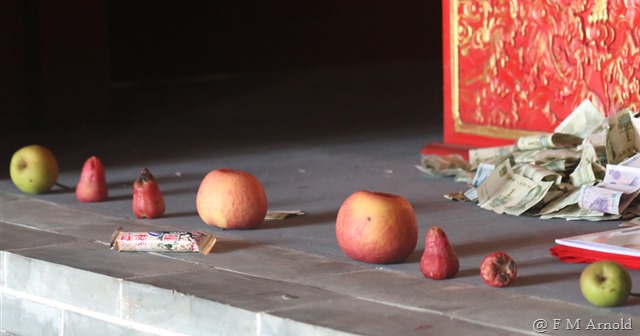 The guard inside the building  patiently watched me take copious photos and as I was leaving he gave me a smile and a thumbs up.   I returned the same!!

As I walked back into the hotel, I was disappointed that my original plans had not materialized but, as usual, Kunming had not failed to provide an interesting experience!!

A guitar is born.....#francesquilts #quilt⁣
Follow my blog with Bloglovin