Back in the car again.

Do you remember the scene from “Jurassic Park”?……the one where Dr. Grant and the two kids are climbing down the tree while the car that has been stuck in the top of the tree quickly makes its way down to crush them.  Then after they have made it safely to the ground, the car tips on top of them but they fit thru the opening in the top.   Tim says “well, we are back in the car again”!!!

That is the way that we feel about China.   Almost every time we have visited we have left thinking that it would be our last trip there.   And then, two or three years later, another invitation pops up and off we go. So, today we are “back in the car again”!!

Our trip started in the usual way on Thursday with our sweet Daughter-In-Law driving us to the hotel near the airport.   We have stayed in this hotel before so I wont show another photo of the hall carpet, but the bathroom did have an interesting geometric wallpaper….. 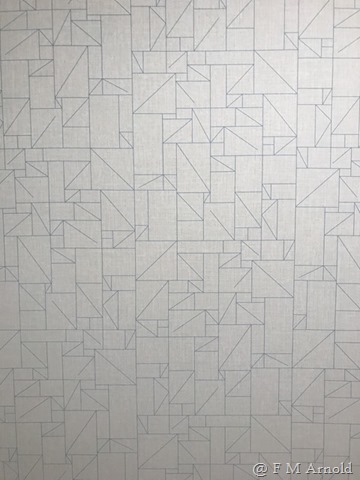 ….and I feel sure that whoever chose the accent color was going for “painter tape” blue…… 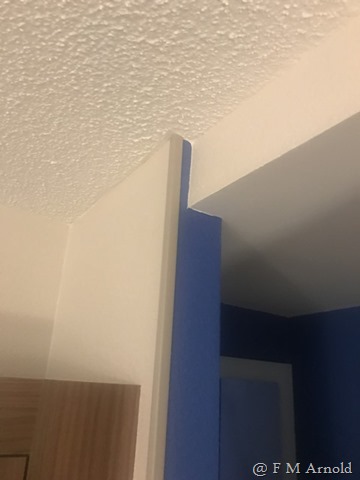 While we were sitting in the Atlanta airport the next morning,  a couple sat down across from us and, low and behold, she was using an International Quilt Festival tote bag!!   Needless to say, the next 30 minutes were filled with the sharing of stories and photos of our creations.

We were flying thru Seattle and my remembrance of our last time there included a magnificent hamburger and fries, so I was super happy to find the sign for

And, this photo says it all…. 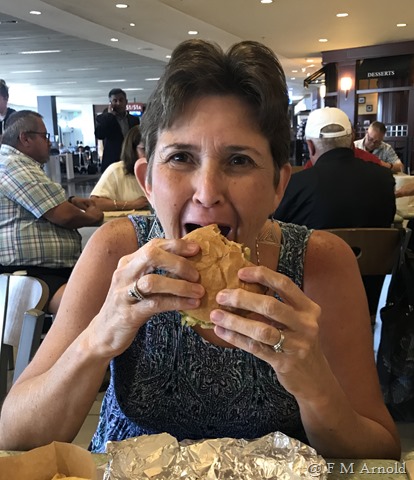 The flight to Beijing was long (11.5 hours) but it seemed to go by fairly quickly.   Michael worked on some stories that he is writing and I did a bit of accounting work, a bit of embroidery work (on a project that I haven’t shown yet) and watched three movies…..”The Greatest Showman”, “Hidden Figures”, and  the ever indomitable Sandy B. in “Miss Congeniality”!!

We had an overnight in Beijing at a nice hotel with a very comfortable bed, great shower, fun hall carpet….. 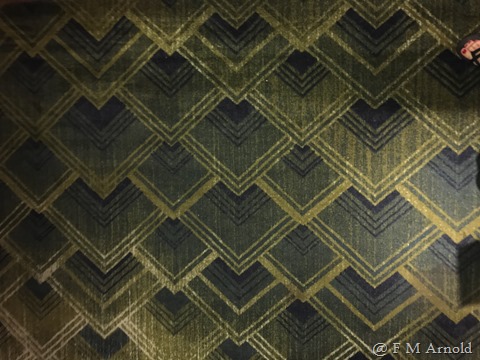 and a marvelous breakfast….. 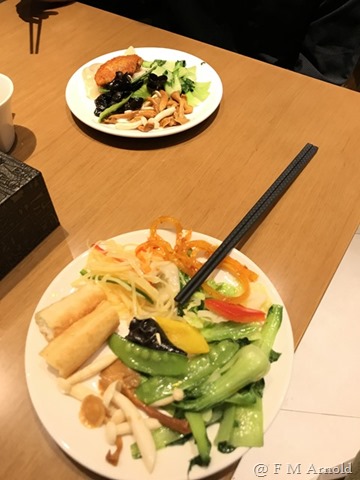 We caught an early shuttle bus to the airport and finally got checked into our flight and thru security.   Michael had issues with one of his liquid medicines that they would not allow in carry-on baggage so he spent about an hour getting it packaged and checked.   It was good that we were so early.

As he normally does, Michael stood up about 30 minutes prior to the plane boarding and I moved into his seat, leaving two empty seats that were filled by two young women.  After about 10 minutes, they both stood up and one of them said to Michael (in halting English) that she was sure that his backpack was so heavy that he should be sitting.  I have translated that into…..”Wow, you are so old!!  We are afraid that you are going to keel over, so please sit”.

We continued to talk to the two of them and then two others joined us.  The four ladies were “Middle School” (equivalent of our High School) students who had been studying in Beijing for the past week.  They and their teacher started asking many questions and Michael stepped into “teacher” mode and did a magnificent job of finding out more about them and what their hopes and dreams were…… 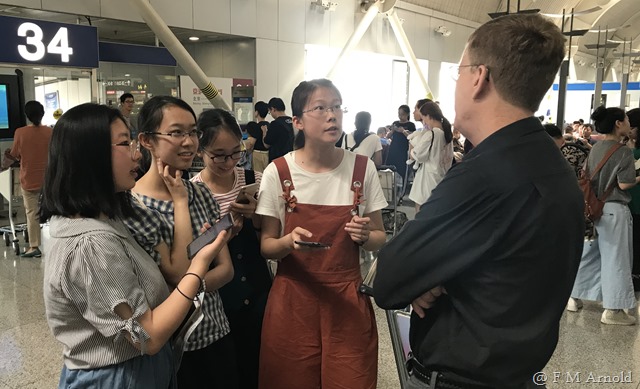 They had been in Beijing participating in a Chinese cultural program and they showed a video of one of them dancing and then photos of one playing a flute.   When we asked what the flute sounded like, she happily pulled it out and gave us an impromptu concert…….

The third girl was a singer and, at the encouraging of her friends,  she shyly sang a few bars of “My Heart Will Go On”,   The fourth one was a debater but we didn’t see an example of her skills.   Having said that, she was very interested in world politics and asked probing questions.

They each apologized for their English skills but we assured them that they were doing a great job.  I did notice that the longer they talked, the better they got.

I was fun to see how eager they were to talk to us and I laughed as they moved closer and closer in to where Michael was standing.   They were super excited when he gave each of them his business card.   We hope that they will email him one day!!

Our flight had been delayed for an hour so there was plenty of time to talk and when we got ready to leave there were photos galore….. 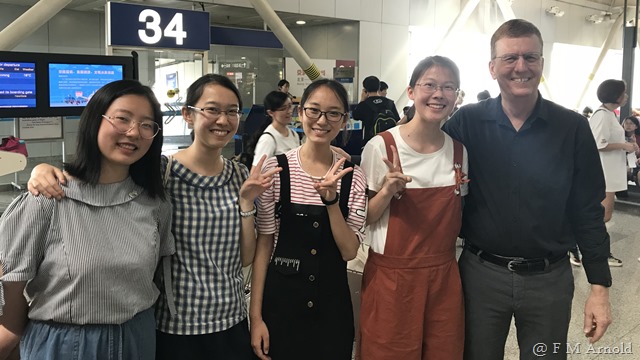 When I joined into the photo group, the young woman on the right looked at me and said “you are so tall”!  She was only a few inches shorter than myself and we had a laugh that she wasn’t all that short herself!!

It was one of those fun interactions that makes traveling worth all of the hassles!!

We arrived in Kunming without incident and were met at the airport by Michael’s host, Wen and by  Ruoping (our “fixer”).  They drove us to “our” hotel….the one that we have stayed at for the last 4 trips, and after we had checked in, they took us to our restaurant for the evening, “Classic 1909”.

The restaurant is new but the building is hundreds of years old.   It was the quarters of one of the Chinese War Lords who tried to take over the Empire but was eventually defeated.  It serves a “new” style of food and is extremely popular.  One young woman (Xiaoyu) had arrived there 2-1/2 hours early to ensure that we had a table!!

The meal started out with appetizer plates….. 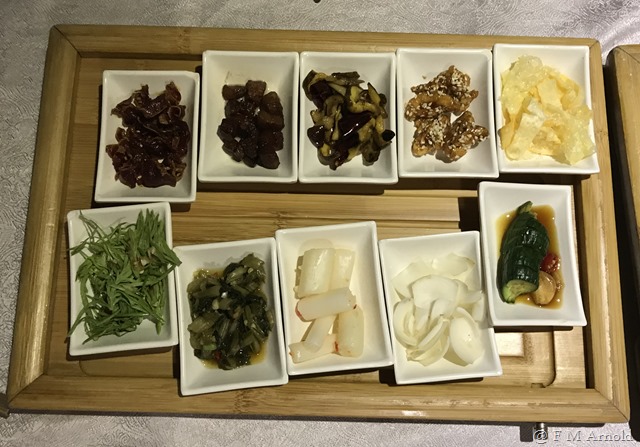 ….that included candied walnuts, sautéed mushrooms, fried pork fat, spicy lotus root, onions, fried butter (no this is not a typo), pickled cucumber and a few others that I never new what they were.    The bottom left is “Pickled Pine Tree Leaves” which were actually pretty good.

Then the waiter brought a HUGE bowl of hot, steaming soup and sat it in front of Michael.  She then proceeded to put a variety of meats and vegies into the soup, with quite a flourish…..

The final ingredient is not in this video….a LARGE mass of homemade rice noodles.

We both thought that this soup would be split between the five of us but we were VERY WRONG.   They proceeded to bring FOUR more bowls and we all went fishing.   It was super tasty and fun to eat.   I had some trouble with the chopsticks and the noodles but soon learned to lean way over the bowl and grab the noodles as soon as I lifted them up.   If you waited too long, those slippery devils would slide right off and disappear back into the depths of the bowl!!

I leave you with this remarkable garnish….. 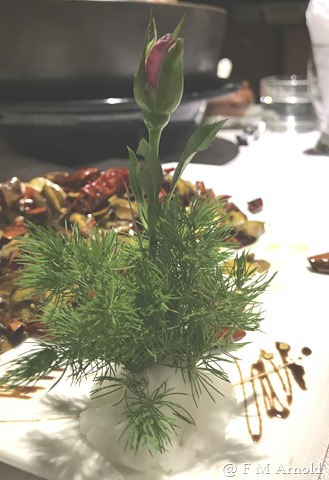 Now for a good night’s sleep and the start to a new week in Kunming!!!

3 thoughts on “Back in the car again.”