We woke up for our first day in Kunming and started with a filling breakfast consisting of half Western food and half Chinese food…a yummy start to the day.

Being the good Rednecks that we are, the first order of business was a walk to Walmart to pick up a few supplies. The store is only about 1/4 of a mile away from the hotel and we found it without the use of any maps or aids.

After we had purchased our few needs, we started the fun task of exploring some of the departments.  Our favorite find of the day were cans of alcoholic drinks….. 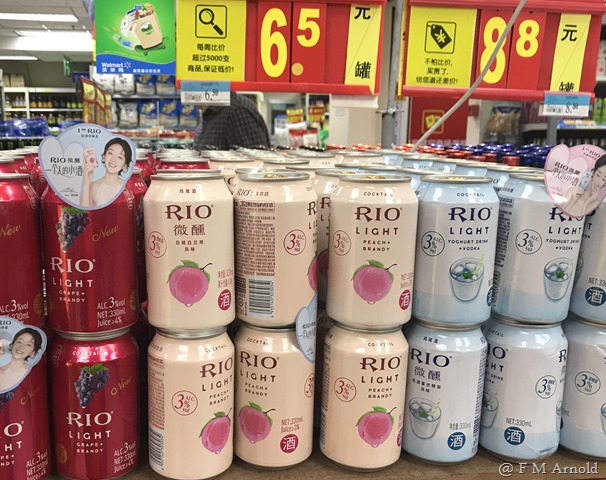 Michael found this “Great Value” brand beer that promises “Creamy heads of foam with a sense of fullness”…..

We returned to the hotel and spent some time in the “Crystal Club” at the hotel.   It is an area that we always ask for because it provides tables, snacks and drinks for us to enjoy.

Michael headed out at 1:00 to meet with his first class for the week and I headed out for my favorite Kunming place…..Green Lake Park!!

One of the things that Michael gave me for my birthday was a National Geographic course on photography and my plan has been to watch the classes in the morning and then go out and practice in the afternoons.  Today I only watched the first lesson which talked mostly about staging photos for the most impact…..keeping the subject of the photo prominent and letting the backgrounds be just that…..in the background!!

So with these thoughts in mind, I headed for the lake.  When we bought our camera, it came with a small telephoto lens (55-250) and, I am ashamed to say, we had never used it.   For the most part I enjoyed having this new lens on the camera.  It does make it harder to get pictures when you cant back up more to get away from your subject, but  it’s so much easier to photograph people without getting right in their face.

Green Lake is a man made lake in the middle of the city and it has islands and walkways running all across it.  It seems to be the centerpiece of Kunming tourism and it is always filled with people.

The first thing that caught my eye was an old man sitting by the edge of the lake painting with a young girl….and, as always, with a crowd hovering tightly around. … 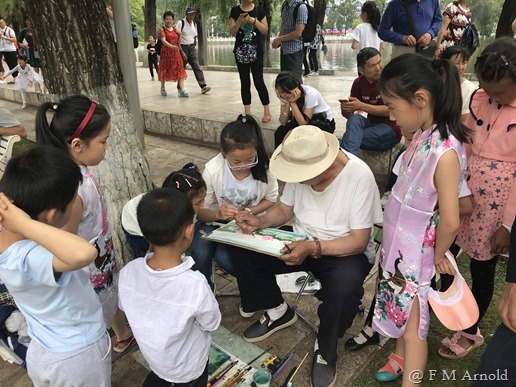 I joined in with the crowd and happily started snapping shots.  Sometimes the teacher would do the painting with the young student holding onto the end of the brush….. 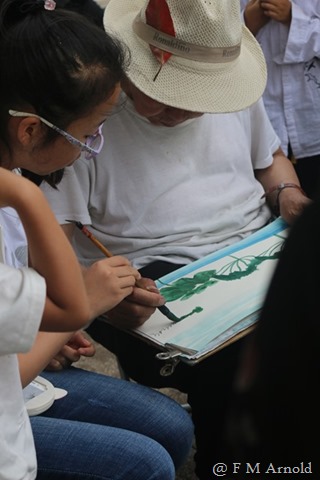 …but most of the time he would draw pencil lines of what he wanted her to paint and then let her do the work herself…. 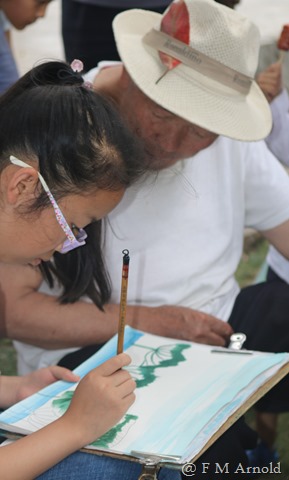 Her concentration was apparent as she worked…… 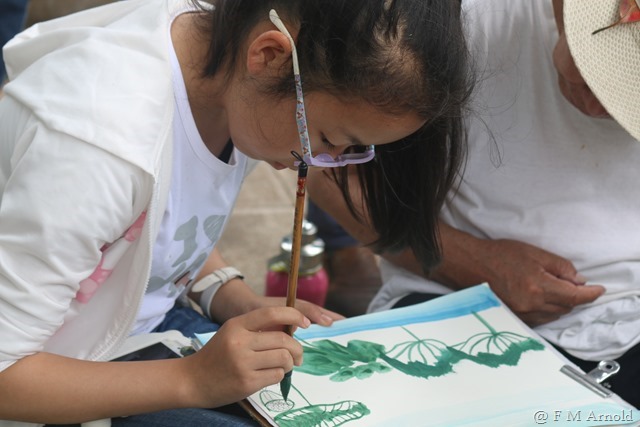 He patiently pointed to the areas that he wanted her to fill in next….. 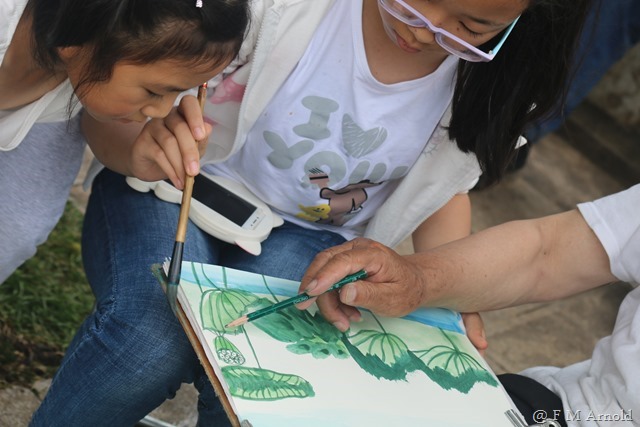 The little girl on the left was completely engrossed in what was being done and was, in fact, the next one to paint!! 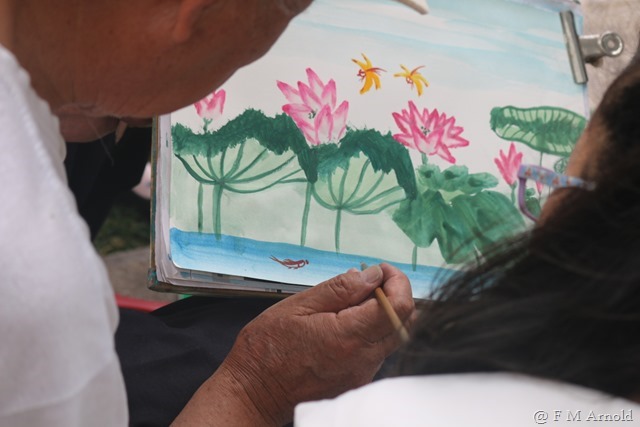 After the picture was finished, he careful he rolled it up, wrapped it in newspaper, and handed it to the young girl…. 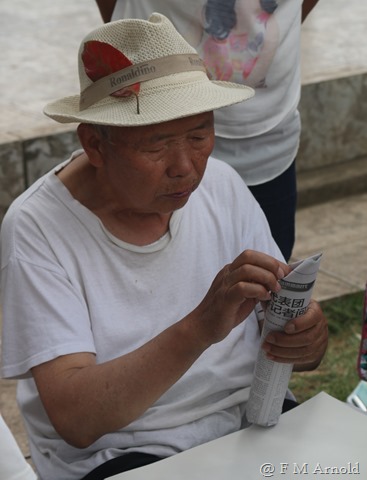 As soon as she was gone another one sat down ready to learn to paint…. 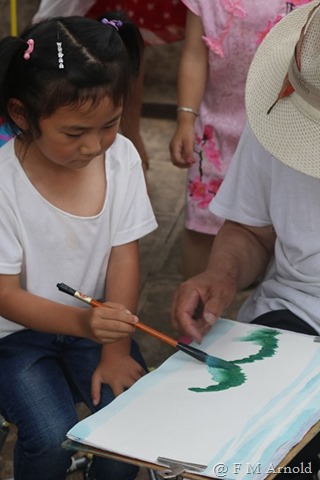 I loved the look on all of the kids faces as they watched…. 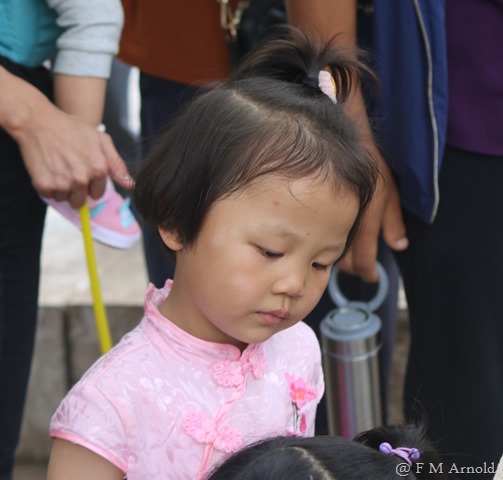 The old man stayed bent over his work, seldom looking up at the crowd gathered around him which made it hard to get a picture of his face.  But his passion for his work was evident in the gentleness with which he helped each young person.

I moved further along the walk and came across my first batch of exercise classes.  Each class has 2 or 3 leaders who proudly stand at the front of the class, next to the amplifier used to project the music to the participants. 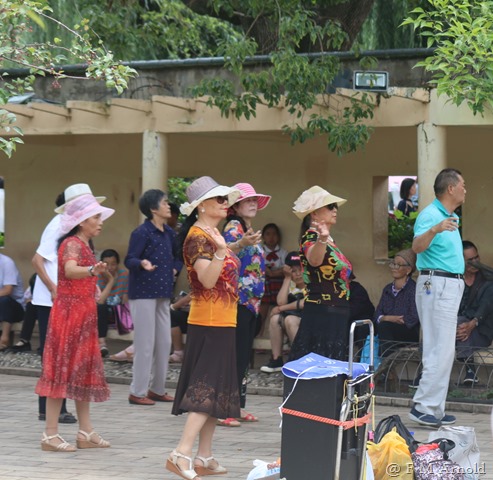 One older gentleman was dancing off to the side by himself, and he kept looking my way, obviously wanting me to take his photo. When I pointed the camera at him, he let it all hang out, giving the dance everything he had…. 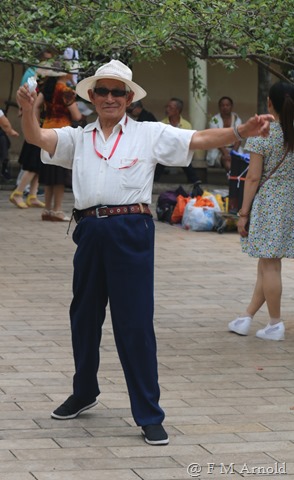 When I finished photographing I gave him a thumbs up and he return the gesture with a big smile included.

I came to a group of musicians who were just getting ready to play. Each one of them had their own amplifier for their instrument, whether it was a saxophone, a traditional Chinese Erhu, or  even a set of bongos.  It is a very inclusive group as I watched another musician walk past, and immediately be asked if wanted to join them.   They grabbed another chair and added him to the group. 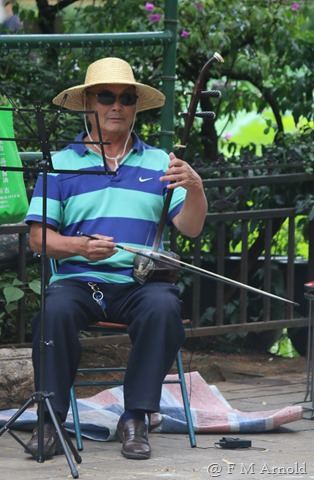 While I was listening to this group, I noticed a young girl sitting on the steps and posing for a picture….. 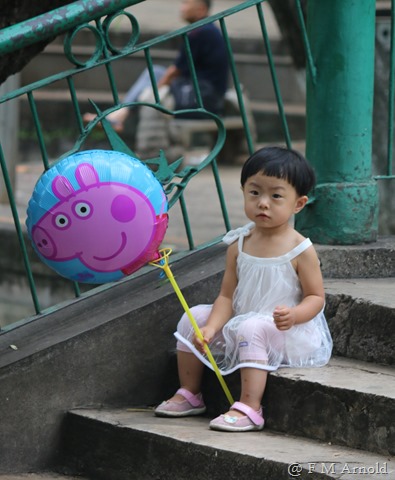 The fun thing about China is that everybody has cameras and they LOVE having their picture taken, so I don’t feel completely out of place.  Although the color of my skin and the roundness of my eyes does set me apart a bit…. that and my shoes!!   They dont wear many sandals and the eyes always go to my feet!!!

Off to one side there sat an older man playing his Erhu, with his own private mini amplifier by his side. I stood and watched him for about five minutes, enjoying as he made the strings of the instrument dance. 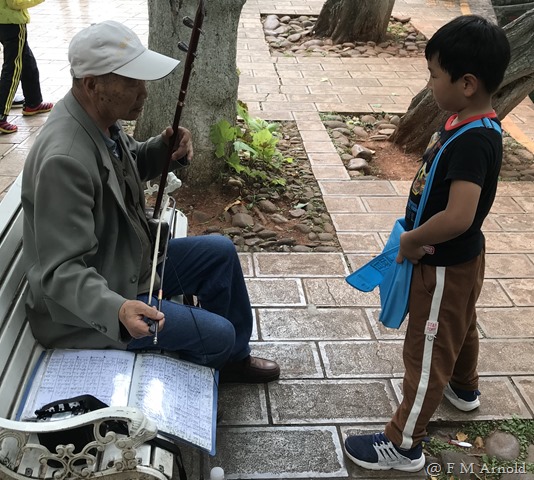 I was interested in the bow. It’s made up of lots of little hair-like strands and is not taut like a violin bow.  And, It actually goes between the two strings of instrument and it looks as if he pushes it forward to play one string and back to play the other one.

Now came my favorite interaction for the day…..

The next ”act” that I came upon was a group of 30 or so men and women, all singing together. 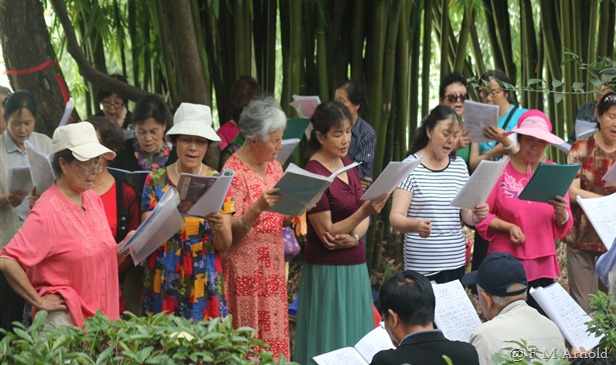 There was one woman who was truly a ham… when she saw me taking photos, she grabbed the woman next to her and gave me a typical Chinese photo op…. 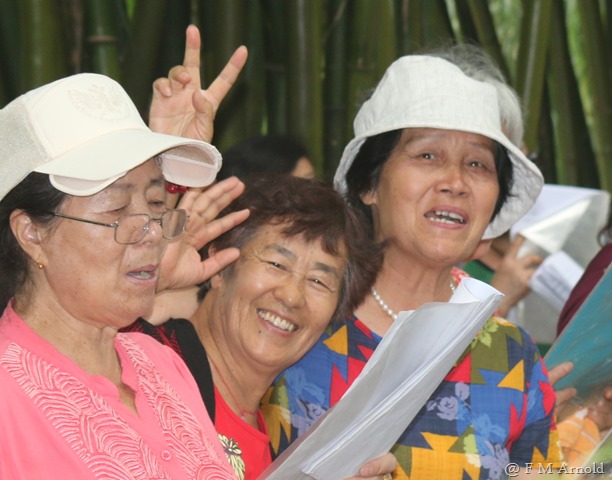 I watched and listened for about 10 minutes and as I started to walk off she caught my eye and gave me a wave “goodbye”.

There was another singing group crowded in a pavilion just around the corner.  I wanted to get to the other side of the pavilion and there was a walkway through the group.   The sound in the middle of the choir was amazing as you could hear all the different voices mingling together. As usual, one lady looked  up from her music and gave me a big smile.  As the song ended, there was much laughter and talking and I wondered how the director ever regained control.

One of my China pastimes is reading Tee-shirts that are written in “English”.   My favorite for the day was “Raise boys and girls the sane way”.   I’m not sure if this is opposed to raising them in the “insane” way, or if it was a typo and you’re supposed to raise them the same way.

By this time the wind had really picked up and I was afraid that it was about to rain so I headed back to the hotel.  On the way I took this photo of bicycles galore….. That evening we had dinner with Doug Yu, one of Michael’s colleagues here in Kunming.  He took us to an interesting Vegetarian restaurant called “The Green Garden”.  The food was amazing as the chef was able to pull together various vegetables, mushrooms and tofu to have the same look and texture as meat and fish.    No….theses are not chicken fingers, but patties made from mushrooms….. 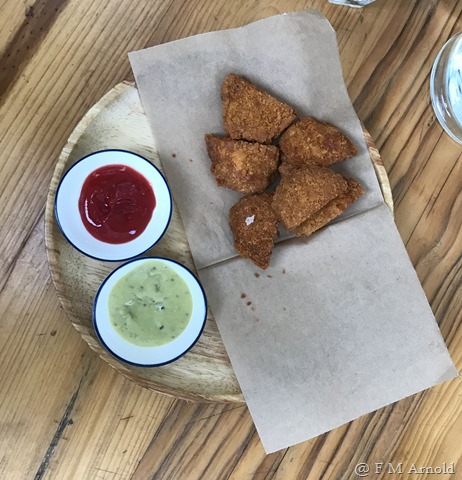 They were just one of the treats for the evening!!

Okay….day one in Kunming is now in the books (and in the blog)…… more to come.