On this second day in Kunming, we started out with breakfast, this time being intrigued by this very interesting green cake….. 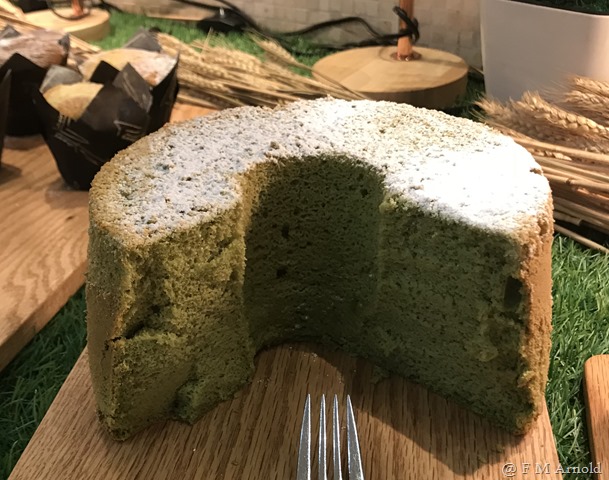 Taking the taste test simply proved that it was a light and fluffy Angel Food cake.  Now, why it was green…..who knows!!!

We spent most of the morning working at “the club” and when Michael left for his class, I headed out to find  a CarreFour  store.   CarreFour is basically a French Walmart and there were still a few items that we were looking for so I was determined to find them.

I started using google maps but then decided that I knew the way better than it did and pretty much made the trip just using my nose.  The store is located in a pedestrian only  area that is usually crammed with relaxing Chinese.  Today however, a Thunderstorm was rolling in and the square was pretty empty. 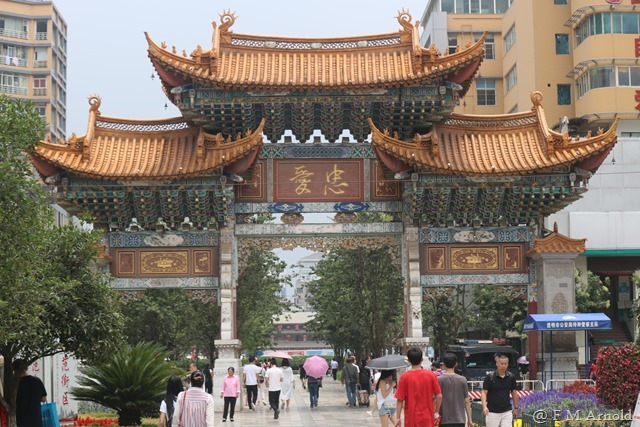 I did get a few photos of two of statues that I had seen and loved in previous trips….. 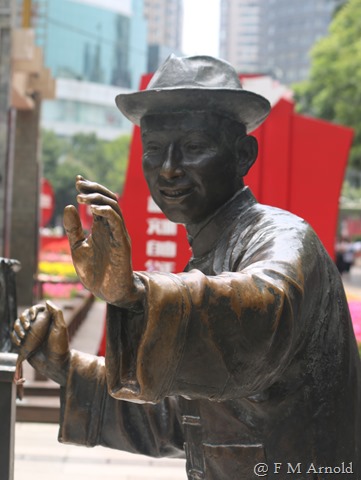 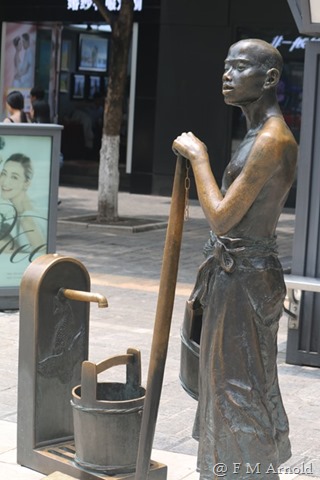 The bells on a  small building in the center of the square  were ringing ominously as the storm approached and when the rain started, everyone made a beeline for one of the stores. I joined in and ran into the CarreFour…..at least I thought it was the CarreFour.   If worse comes to worse, there was a McDonald’s so all would not have been lost.

I walked around thru a mall like area and  finally saw the  escalator up to the store.  Just like the Walmart, the store is an absolute maze. It’s on two levels, and sometimes it just seems to go on and on forever.  After I was finished shopping,  the trick was to find my way out now.   My first thought was to follow the signs pointing to the Exit and Cashier, but when I passed the same set of shelves twice, I knew that I had made a complete round and was back where I started.   Obviously I missed something!!!

Meanwhile I did see a few interesting items in the store.   The first were these plates that each had 1/2 of a fish….. 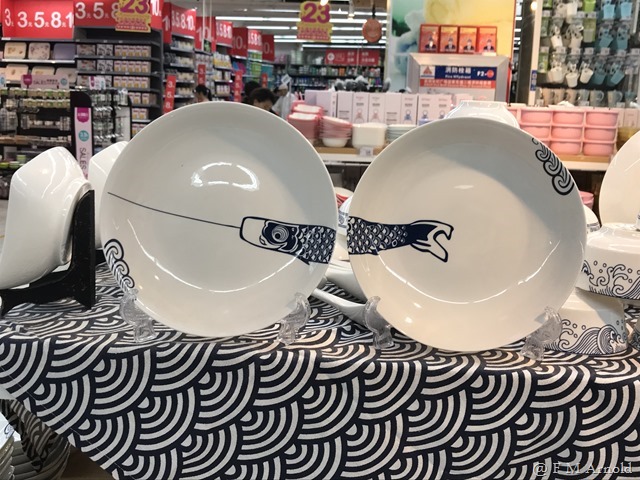 Then there were these Pringle cans that were so distended that the plastic caps would no longer fit….. 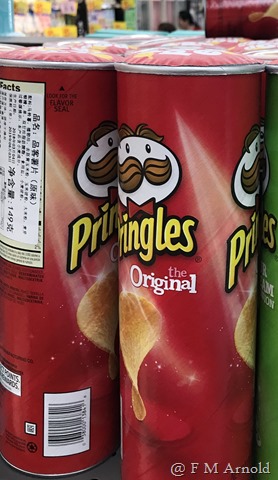 And, finally, there were these “oh – so – yummy”  Beef Flavored Sunflower Seeds and Crab Flavored Peas….. 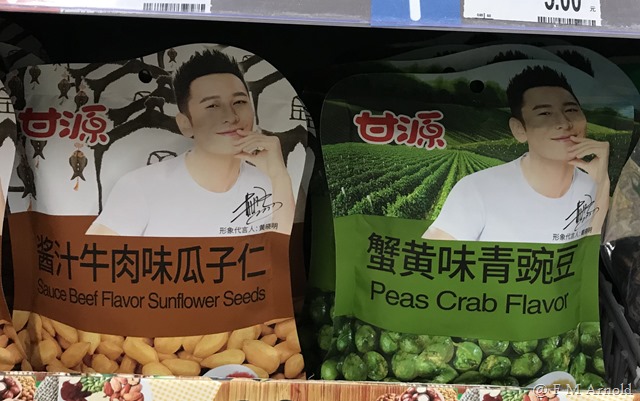 In most stores, the yogurt area is crammed with people and filled with store employees hawking the various types of yogurt.   This store came up with a “better” plan and instead had bullhorns stationed throughout the area, each playing a recording of what was for sale on the shelf below it…..

It was then that I realize that the cashier was on the third floor. 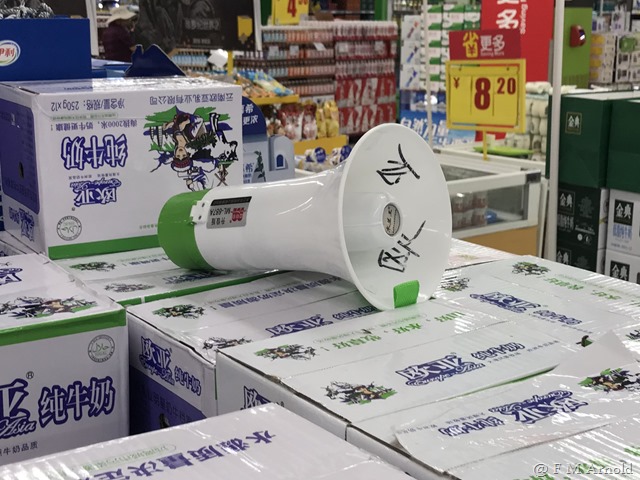 The din was amazing!!!

OK…now back to my trying to get out of the store…..  After making a couple of laps of the 1st floor, I remembered that I had seen the checkouts on the SECOND floor!!  So, I climbed the stairs and made my way to the check out area.   It is counterintuitive to me that the checkout isn’t at the bottom of the store!!!

At this point I was through shopping and hoped that it had stopped raining.   Fortunately the storm had passed, but there was still a fairly steady rain coming down. I waited for a few minutes and then grabbed my umbrella and off I went.  The biggest problem was  that the streets are very slick, and I had to walk slowly and carefully to keep from falling down.

When I reached the main street that takes me back to the hotel, I decided to go ahead and cross this huge street where there was a light and walk on the other side of the street this time, just to see new things and also thinking that it might be more sheltered from the rain.

There was a long stretch where there was construction and the sidewalk was closed off, which meant that I had to walk in the motorbike line. It was a bit harrowing as the motorbikes sped around the walkers, but most would give a friendly beep  to let you know that they were coming

They were also doing construction along the sidewalk, digging big holes so that they could get to the pipes and wiring underneath. There were large bags of dirt next to each hole and I originally thought that they were building  flowerbeds and would use the bagged dirt to fill the holes.   Then, I finally realized that the bags were full of the dirt that had been dug up  when the hole was made.   At home, we would just have a pile of dirt on the sidewalk!!

After a few minutes the rain stopped, the sun came out, and life was good again.

I walked past a church that I had visited on our previous trip, and saw two white robbed men taking pictures out front. I looked into the church  and could see a large number of white robed people milling around.  So, being a good “sticky beak”  (Australian term for nosy person), I slipped into the back row and just watched for a while.

I spoke to the church organist and found out that this was a 100+ person choir from another city and that they were were performing in the church in the evening.  He also told me that this church was one of the “Government approved” protestant churches and that the service was a mix between Presbyterian and Anglican.

I watched for quite a while as the director SLOWLY got all of the members on the stage and into their respective places.  I was appalled that the back row were standing on small stepstools.  I cant imagine how uncomfortable it would be to have to stand there all thru a concert.  I was also glad to know that there wouldn’t be any swaying and clapping as that could have been deadly!!

After about 30 minutes of watching them set up, they finally started singing. They did a short warm-up and two songs and then they were thru!!  They did sound magnificent and there is something about hearing “Amazing Grace” being sung in a different language….

As soon as they finished two young girls came running down the aisle to me and breathlessly said “can I take a picture with you?”  When I said yes, she called to her Mom and many photos ensued.  After the pictures they told me that the praise concert was at 7:30 tonight and that I was welcome to come.   Too bad that we already have plans!!

Our plans for the evening were to walk down the street to one of our favorite restaurants in Kunming.  It is called “Salvadors” and is run by a group of “non-Chinese” immigrants and visitors.  They have an eclectic selection of food and Michael enjoyed a wonderful BLT with fries and I had a spicy Chicken Quesadilla.

As we were leaving we met up with Colin who is one of the owners that we met 5 China trips ago.  He told us that they have opened another “loft” venue just down the street and that there was an Art Silent Auction going on.   He knew that we enjoy art and he said the magic word to send us tripping up the street.

We arrived to find a group of enthusiast who were either there for the art or for the happy hour prices….I couldn’t be sure!!   The artist is a young woman named Charlotte Massey (www.charredlatte.com).  She is from Washington state and she been an exchange student in China for the past 6 weeks.  Her focus on this trip was to make art that was “Painted with Place”….to use the natural materials that were around her to make the paints, giving each painting a feeling of place.

The auction was for 9 of her postcard size paintings, with the proceeds going to a local charity that helped the people of Kunming…. 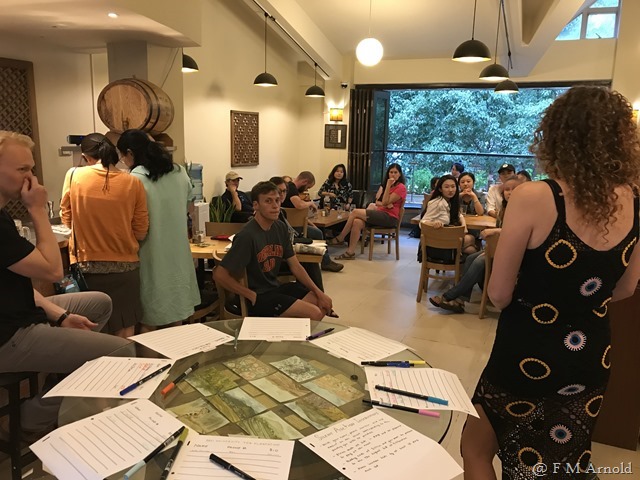 This link (http://www.charredlatte.com/#/painted-with-place-1/) will take you to a few of the paintings that were for sale.

As you can tell from the group photo, we were once again the “Grandpa and Grandma” of the gathering!!

We talked at length to Charlotte and then started looking at her art.   Before I knew it, Michael had placed a bid on a painting of a bird….a Hoopoe to be exact.  The initial bids were placed in a civil manner, but as the cut-off time grew near, things started to get a bit crazy.   As one patron put it….”This is the loudest “Silent Auction” that I have ever heard”!!  We continued to bid on the Hoopoe but there was one other woman who was matching us raise for raise.

In the last 30 seconds, she and I stood on opposite sides of the paper with our shoulders touching and pens poised ready to outbid the other.  And………I choked at the last minute and she won!!!   Oh well, it was still a whole lot of fun and a great experience to end off a wonderful day…..and we ALMOST had a Hoopoe to show for it!!

It was so much fun to make a quilt block inspired by wonderful-smelling cloves!!⁣
Follow my blog with Bloglovin