Sometime back I posted a blog about quilting with my friend Claire. Claire is now 10 years old, and we have been quilting together for the past year. It has been fun to see her skills develop , and to see her interest in trying different things.

After making her first quilt, which I described in this blog post, she said that she wanted to make things for her family , starting with something for her twin brothers, Andrew and Noah.  She told me that they both loved animals, especially dogs , so I started looking for a pattern that would work.

When we started out, I wasn’t sure if she wanted this to be a big quilt or a small one , so we started with just making 2 dogs, And she soon decided that she wanted to do funky colors rather than real colors. 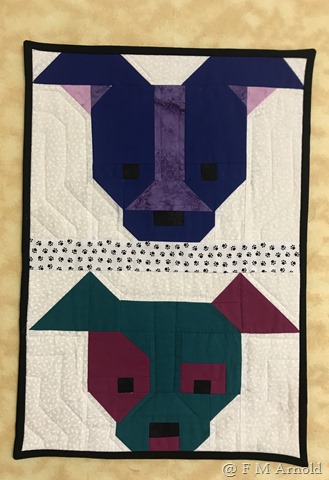 She was happy with just the two dogs and her brothers LOVED it!!

As we had done previously, I did the measuring and cutting , and she did the sewing. At the the start of each lesson, I had her spend a few minutes with a Rotary cutter and ruler….AND a non-cuttable glove!!! 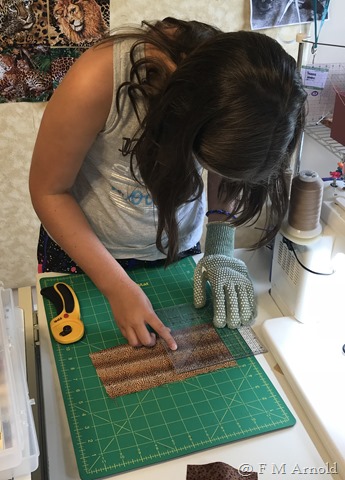 Next came a quilt for her other brothers, Isaac and David.  This one was a no-brainer because they are both heavily into SOCCER, so soccer balls it was.   This time we used fusible applique….. 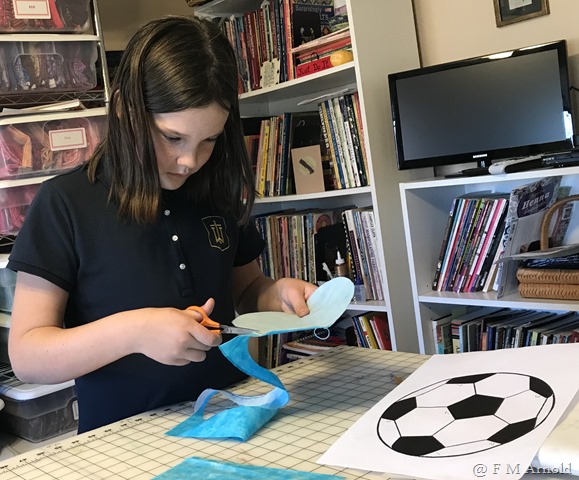 ….and she very patiently did all of the sewing to attach the applique’s to the background.   The end result was….. 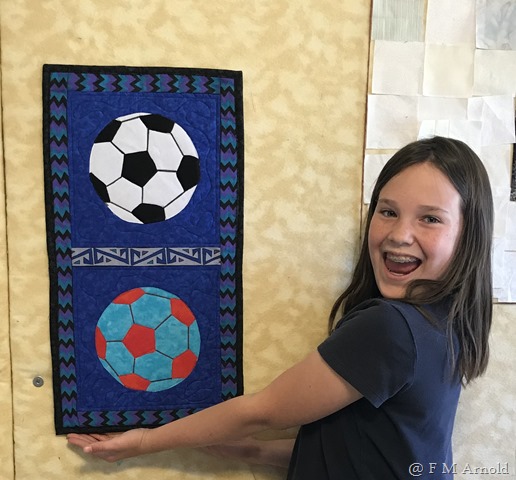 Now there was just one last family quilt to make…..one for her Mom and Dad.   She knew immediately that she wanted to do a cross of some sort so I scoured the internet until I found a design that we could work from….. 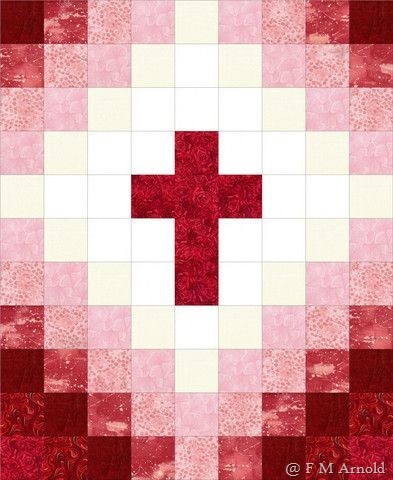 We changed the dimensions a bit and she graphed it out before we started….. 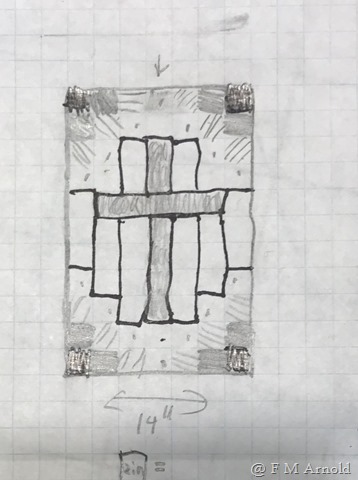 As we were picking fabrics, I showed her how to use a “Value Finder” and she spent one afternoon checking the values on the fabrics that we had chosen….. 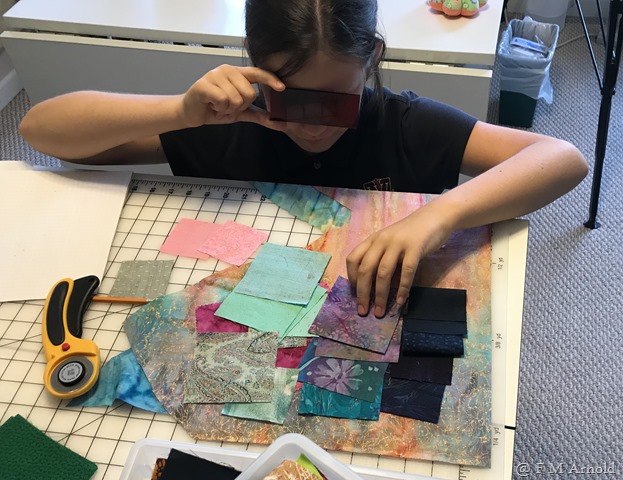 At one of our meetings, it was obvious that she wasn’t really in the mood to sew so she spent an hour designing patterns with a couple of Charm Packs that I had lying around…… 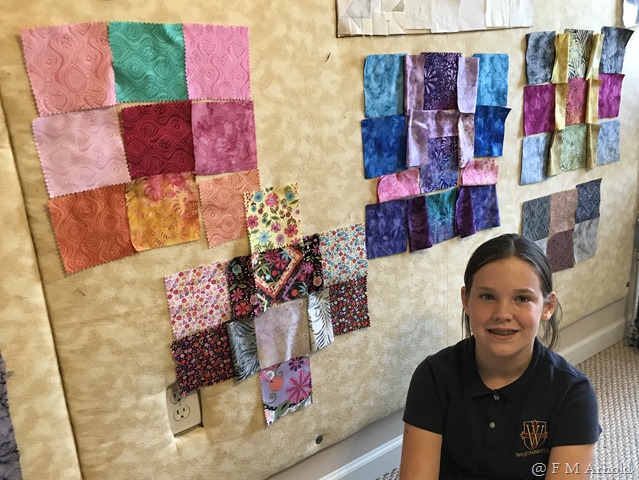 This is just a FEW of the designs that she came up with!!!

But back to her Mom and Dad’s quilt…..   She did the majority of the work on this one, starting with cutting the squares, laying it out, sewing the rows together and carefully pressing each seam.  I helped her with pinning when she started joining rows and she soon learned how to “stretch” the fabric just a bit if it was needed….. 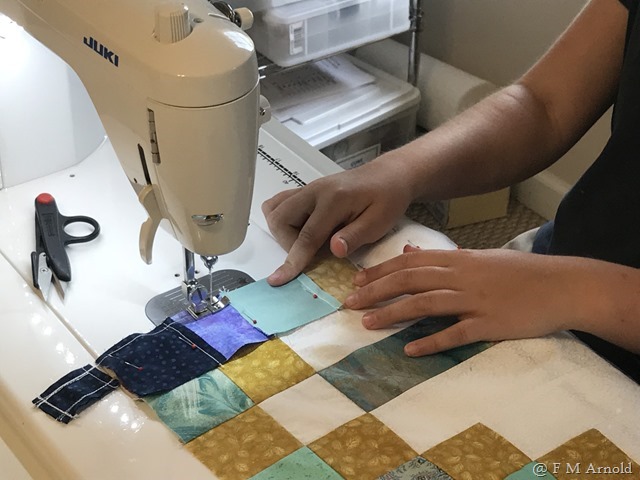 I have been really impressed with her machine technique.   She has become more proficient with every project that we have done.

Like many of us, quilting is her least favorite thing to do but she persevered with this one and did a fantastic job…. 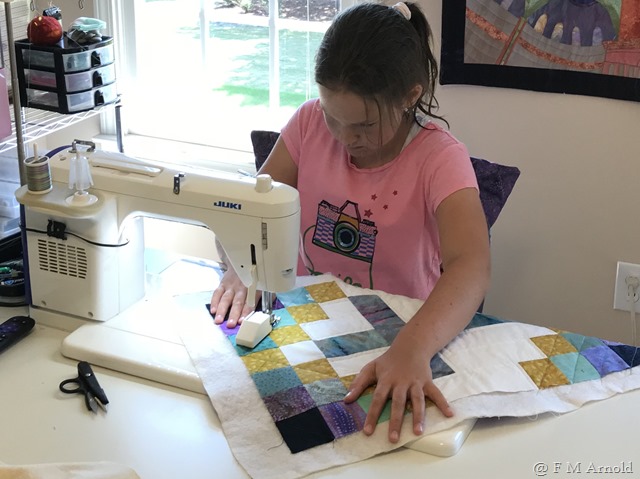 I did the final task of adding the binding while she colored this wonderful reminder for my studio….. 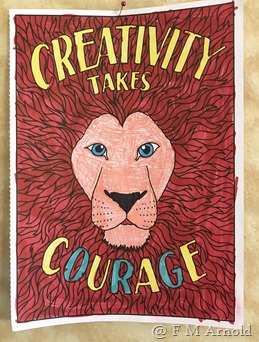 The final quilt was great….. 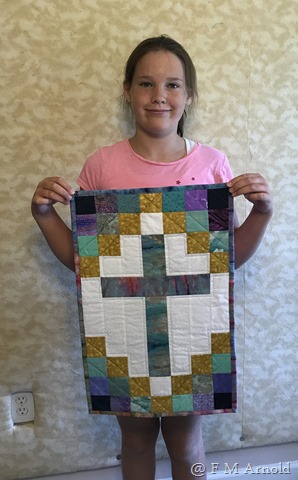 ….and we are now onto a new quilt using some jungle prints that she found in my stash…. 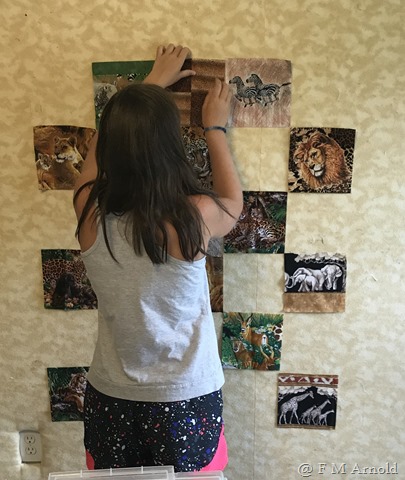 One of the fun things about Claire is that she doesn’t want to make these quilts for herself!!   Except for the very first one, she has found a recipient for all of them and now she is talking about making them for one of our local children’s ministries……

A guitar is born.....#francesquilts #quilt⁣
Follow my blog with Bloglovin