After doing a quick view of the quilts on the opening night, I woke up early on Thursday morning ready to start getting serious about the show.   I began the morning with my first class….the Machine Quilting Forum.  I had no idea exactly what this would be like but ended up enjoying three very informative hours.

The session began with each of six women giving a short talk, telling us how they came to be a quilter and what had influenced their art over the years.  We then split into groups and spent 20 minutes with each quilter and learned some amazing things…..

My first session was with Cathy Wiggins who specializes in quilting on LEATHER and boy did she get my attention quickly….. 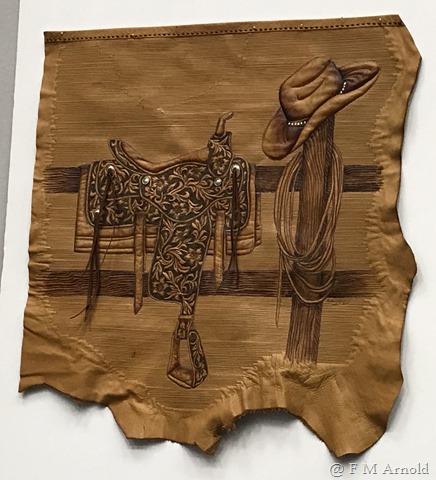 Being a cowgirl at heart, her work made my head spin!!  And, the thought of collaborating with Michael in some of his leather work just seemed too good to be true.  She gave us some basic information and told us that she has a book coming out in March….  “Quilting Leather on Any Machine”.  And yes, she does all of this work on a regular home sewing machine!!  She said that the only requirement was that you use a “leather needle” which actually cuts a hole in the leather rather than just pushing it thru like a fabric needle does.  I loved the textures that she could get from the leather….. 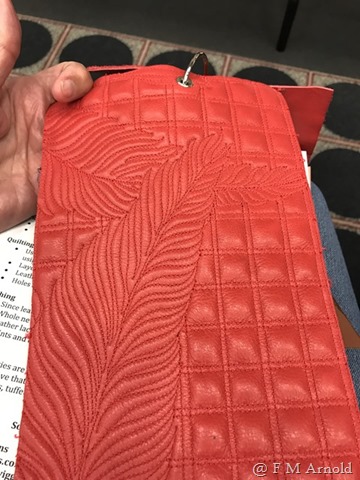 And I have to admit that I have already bought some needles and given it a try with some of Michael’s leftover leather scraps.  I am thinking that his leather is a bit too thick for the job but I have pre-ordered her book and cant wait to have a full-fledged try with it in the Spring.  The most daunting thing about the process is that, because the needle actually cuts a hole into the leather, you cant make a mistake because it will show…..YIKES!!

Cathy had one quilt in the show itself, a piece called “Another Day”…… 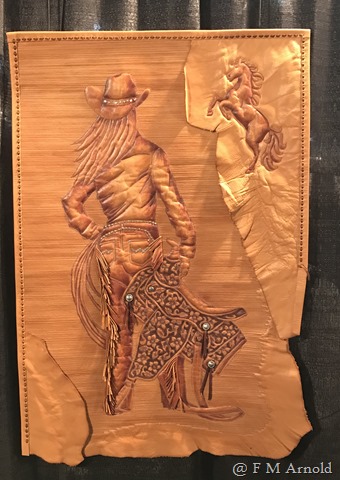 All too soon the bell sounded and it was time to move on to Patt Blair who talked about ways to make “knife-edge” facings to your art quilts, and just look at her magnificent quilts…..

Her biggest trick is that she does some stay-stitching at various points of the process and also trims extremely close to the edge of the piece.   Her technique is described in detail on her blog at http://pattsart.blogspot.com/2016/04/facing-art-quilt.html  I will definitely remember it the next time I am finishing up a quilt!!

The next session was with Nancy Goldsworthy who talked about “The Art of the Pantograph”.  It was obviously designed more for long-arm quilters although she did talk about using the pantograph on a home machine by piercing it and using a pouncer to chalk in a design.  My favorite thing with her was her encouragement to stop and play and to break the rules!!!  Sometimes we need to hear those things!!!

Next was Jenny Lyon who talked about “Finessing your Free Motion Quilting – Small Changes = Big Results”.  And, based on the pieces that she had hanging behind her, she knows what she is talking about….. 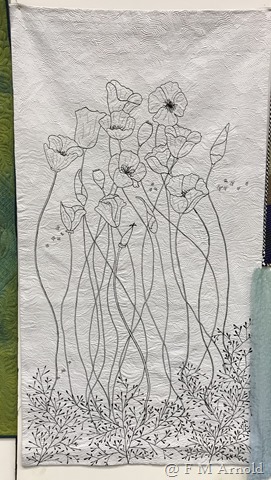 Her basic message was to pay attention to some of the routine choices that you make when working on a quilt and then see how much difference they make.  There were two things that she said that stuck with me.  The first was what batting to use.  I have to admit that I tend to use the easiest one around, which in my case is a fusible from Hobbes.  I know that I really should try different ones, but often it just seems easier to use what I am used to.   Maybe I can branch out one of these days!!!   The other thing that she talked about was basting and this is really the reason that I love the fusible so much.    You dont have ANY pins to dodge when you are quilting  AND you dont have to use a messy spray.   However, her basting method might just work.   She pin bastes on a grid and then uses water soluble thread (top and bobbin) to stitch between the pins.  Once that is done she removes the pins and is able to work on the basted piece with worrying about pins.  And, the water soluble thread easily washes out…..hmmmm…something to think about!!

The 5th session was with RaNae Merrill who has just come out with a book called “Free Motion Mastery”.  Her teaching approach focuses on 6 basic shapes (straight line, C-Curve, Circle, Teardrop, S-Curve and spiral), with the assumption that once you have mastered those, you can easily quilt almost any design around.  The one tip that I really liked from her was to practice the design you are about to quilt by drawing in the air or on a table, but holding both hands together just like you would at the machine. 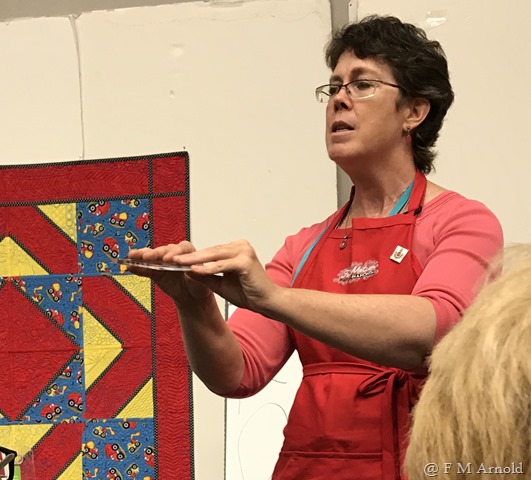 She suggests holding a small acrylic ruler in your hands or even just a piece of clear acetate with a dot drawn on it.   I can really see how this would build muscle memory and hopefully make it easier to quilt some of the designs.

My last session of the morning was with Catherine Redford, a spunky English lady who does some amazing modern quilts and does almost entirely straight line quilting….. 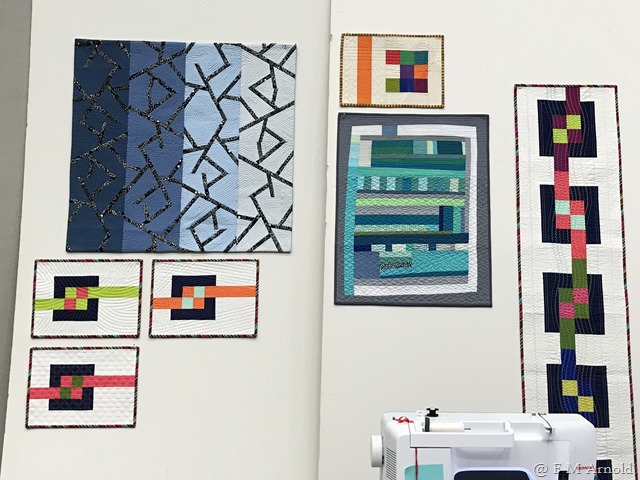 She had a couple of interesting tips.   The first was to run a stiletto down a seam before stitching in the ditch.  She said that it helped to open the seam and make it easier to keep the stitching in the right place.   Now, the other tip was one that I shouldn’t have to be TOLD but….. have you ever used masking tape to mark straight lines?  I have tried it and always got frustrated because I would accidently stray onto the tape and then I had a big mess to deal with.   She reminded us that we didn’t have to sew RIGHT next to the tape but could use it as a guide and stitch a 1/4 inch away from the edge…..DUH!!!

After I got out of class I met up with Linda and we decided to hit a few rows of vendors!!  My first purchase was this cute batik piece….. 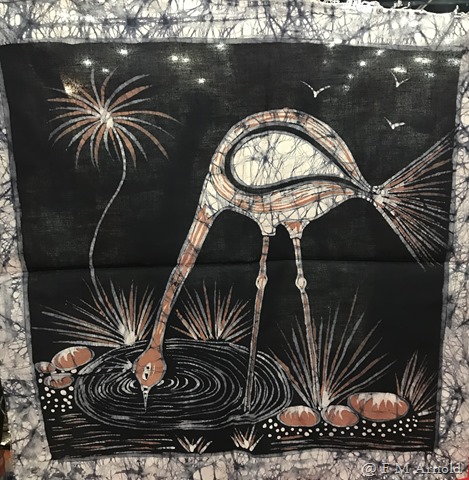 I am not sure exactly why it called to me, but I cant wait to layer it up and have some fun with quilting it!!!

After a while, we ended back at the quilt show end of the auditorium.  Here are a few of my favorites……

The piecing was amazing in “Red and White Stars”, made by a group of women from the Austin area….. 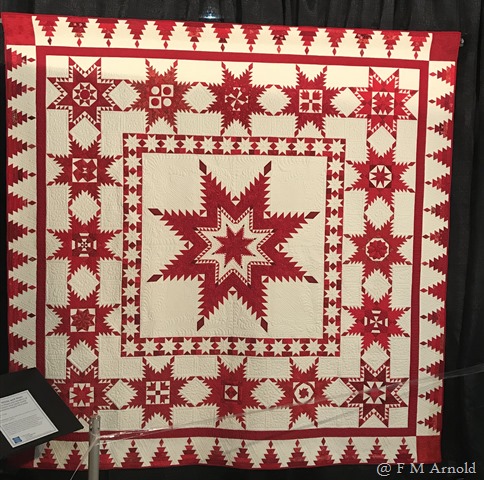 The most amazing thing about the quilt is the fact that it was made by a GROUP of women….how did they ever get such complicated blocks to fit together so well!!! 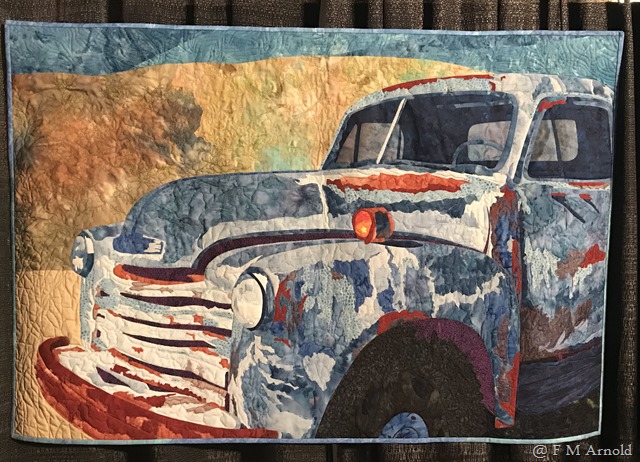 It was titled “Old Blue” by Michelle Jackson and was made with fusible applique.  On one of my passes by the quilt I finally noticed that it had a tulle layer over the applique….. 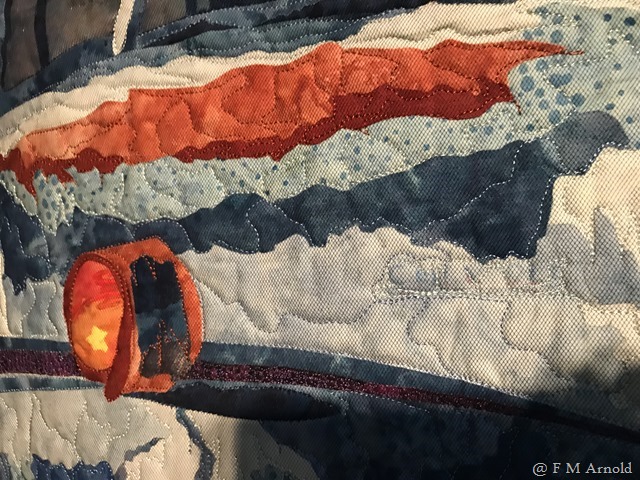 This is a technique that I have been wanting to try so looked at this quilt with even more appreciation!!

We spoke to the maker of this quilt, Karlyn Lohrenz, for a long time.  It was part of an exhibit featuring just her work and she seemed completely overwhelmed that her work was in such prominence at the show. 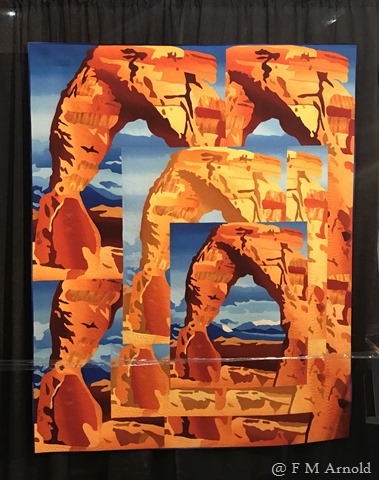