When I started thinking about classes to take at IQF, I was pretty sure that I didn’t want to do anything that would mean carrying a bunch of supplies with me.  Also, I was going to the show for inspiration and not really for new techniques. So, when I saw the Ricky Timms seminar called “Dream It, Design It, Make It”, I knew that it was for me.

And, I was not disappointed.   He spent his three hours showing us some basic design elements and techniques and encouraging us to go forth and create….just what I needed to hear.

He first began talking about Skills and Technical Excellence.  He defined “technical excellence “ as how well you did what you INTENDED to do!!  He also commented that intuition can take you so far in the creative process and when you have exhausted it then the technical knowledge kicks in.   How many times have I seen that in my work!!!

Next he worked thru the various elements that make up a quilt, starting with LINE.  His comment here was that it was the artist’s job to control the viewer and that the use of lines was an excellent way to do that.

Then came SHAPE with him hypothesizing that shape is more powerful than color.   To demonstrate this, he told us that when we saw the next slide we were to shout out what color it was.  The only problem was that the shape of the object said BLUE but it was printed in RED.   Almost all of us immediately said “Blue” but then quickly changed our answer to “Red”.

The third element was VALUE.  I loved his comment that “color gets the credit but value does the work”.  He encouraged us to spend time in the areas of our quilt that contain contrast (and interest) and not to sweat the other areas of the quilt as no one will be looking there anyway!!!

Fourth was TEXTURE, which he called the “surface character”.   He further defined this by saying that it doesn’t have to be touchable with our hands but can be touched with our eyes.

The last two elements were SPACE (positive and negative) and FORM (has height, depth and width).

In the second hour he moved into the principles of organization which he reminded were only guidelines and NOT laws…..

Harmony  –  glues all of the parts together

Variety  –  the counterweight to Harmony

Proportion  –  keeping things in scale, although whimsy is created when things are out of proportion.

Dominance & Emphasis  –  Make what is important…..IMPORTANT

Movement  –  takes the viewer on a journey

Economy  –  Keep it simple and go back to basics.  As Leonardo daVinci said….“Simplicity is the ultimate sophistication”

My favorite quote of the entire workshop is that he loves the dialog between himself and his design wall……what a great way to think of it!!

He ended the workshop with an encouragement for us to look at the things that keep us creating and the things that hinder our creativity, and then he told us to go home and BE CREATIVE!!!

On that note, I met Linda again and we hit the floor again to see what we could see….. 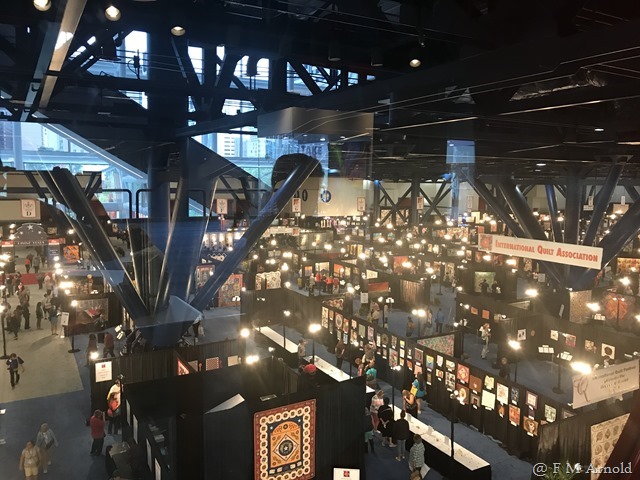 The show was divided into a lot of smaller exhibits.  One of our favorites was by Danny Amazonas, a magnificent fiber artist from Japan.  The first quilt that we saw was this HUGE Koi pond….. 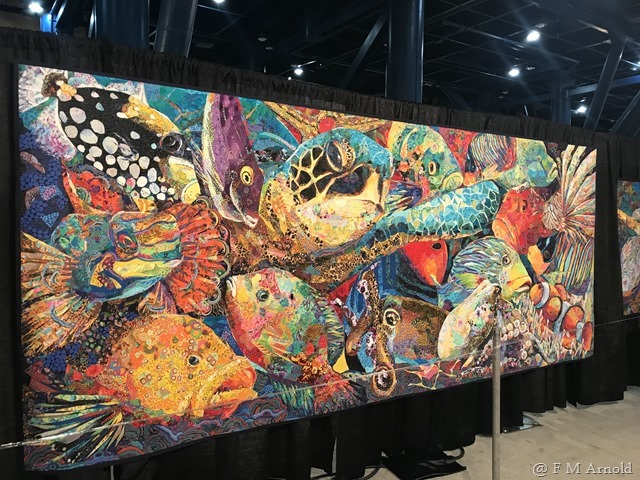 We walked around the corner and saw even more wonderful pieces….. 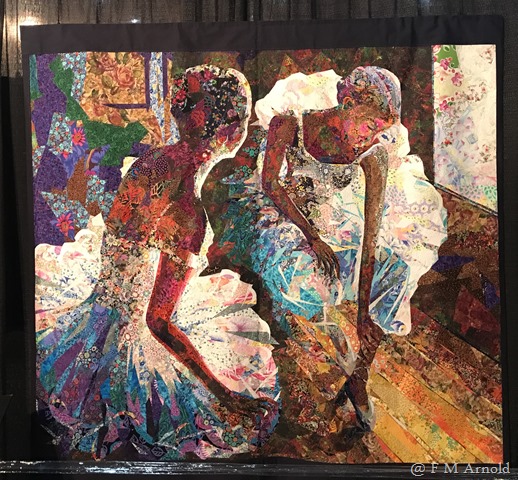 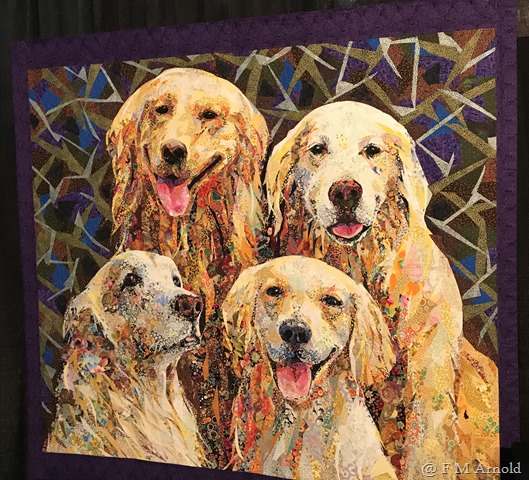 ….and my all time favorite…… 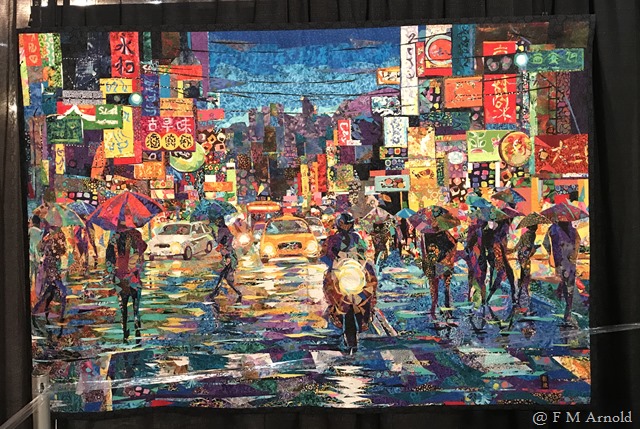 Now, technically they were not quilts as they just had a backing and no batting, but the way that he used the fabrics was astounding.  I also loved that he used only commercial fabrics and I could point to many that I owned as well.   He finished the top with what looked like a free motion zig-zag stitch done with monofilament thread.  If you google his name there are several videos showing his work in progress.

The other exhibit that I loved was the Cherrywood Fabric “Van Gogh” challenge.   The rules were as follows…..

Most of the quilt top had to use the official VAN GOGH blues and black Cherrywood fabrics. Accent colors of Cherrywood were allowed. The  entire quilt top and binding had to be made from Cherrywood Fabric and was to be 20 inches square.  Any technique or fabric manipulation was acceptable as long as it maintained the color and character of a textile quilt.

The results were magnificent….. 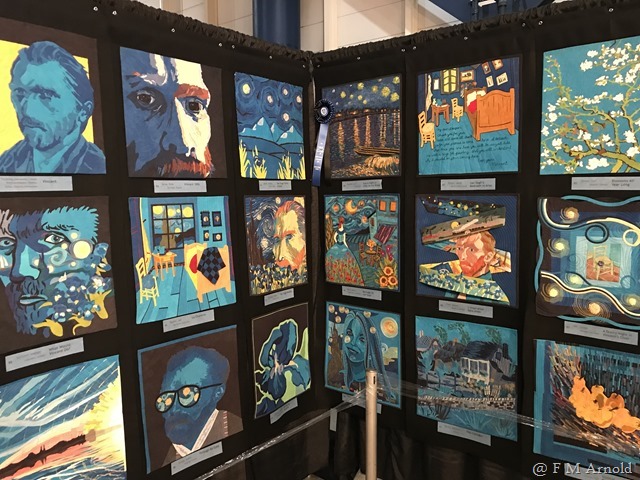 ….and of course I was drawn to the sunflower….. 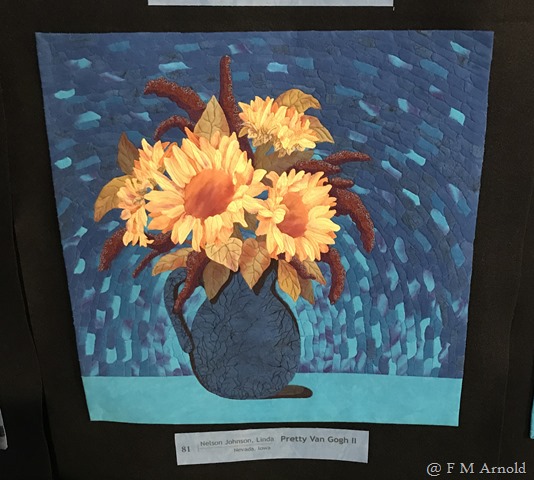 ….but the theme is “Prince”.  Not being much of a Prince fan I am not sure that I will participate but I will definitely keep an eye out for future challenges!  My friend Deb has encouraged me to go ahead and buy the fabric just in case inspiration strikes!!!

I spent much of my time studying the exquisite machine quilting that was shown.  The texture that can be achieved is so exciting….. 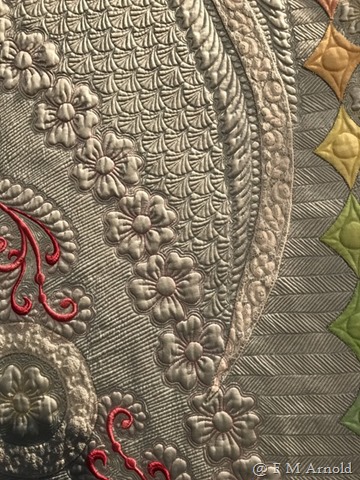 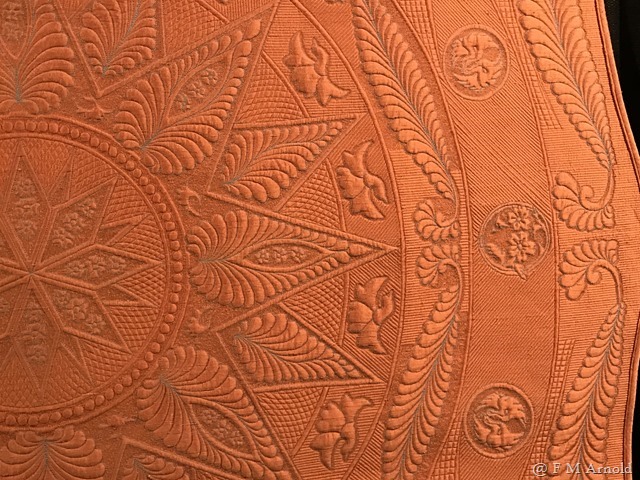 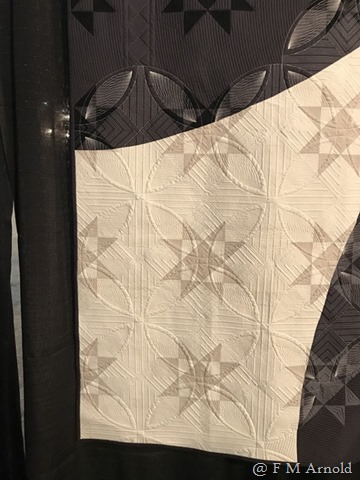 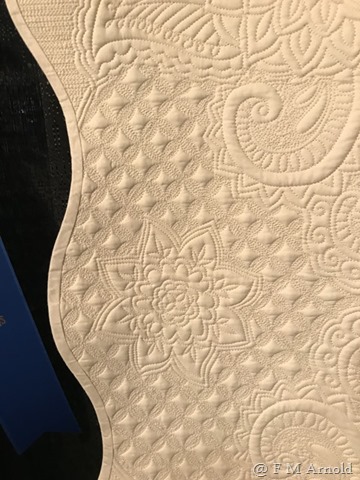 This quilt by Kristin Vierra called “Star of India” was magnificent….. 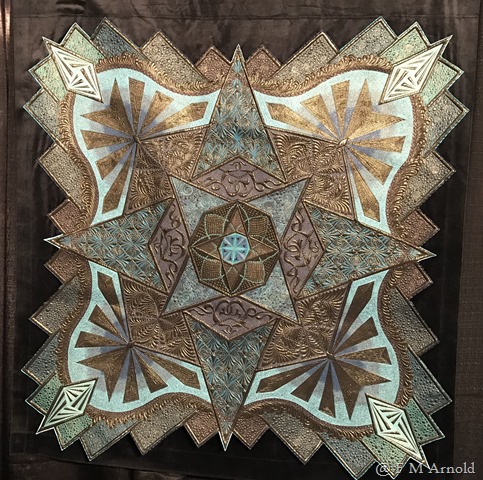 ….as was “Wickedly Green” by Debora Poole….. 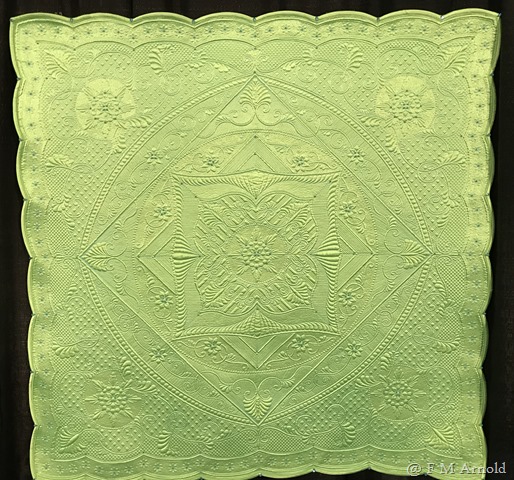 I left this exhibit with LOTS of ideas for making a whole cloth quilt!!!

One final comment for the day….. I spent quite a bit of time with Cynthia England, author of the book “Picture Piecing”…..

I have been enamored with her quilts for many years but never thought that I would be able to pull off the technique.  But, she very patiently demonstrated her technique and answered a myriad of questions which increased my excitement about trying it sometime.   She posed in front of my absolute favorite of her quilts……

I left her booth with a new found respect for her!!! 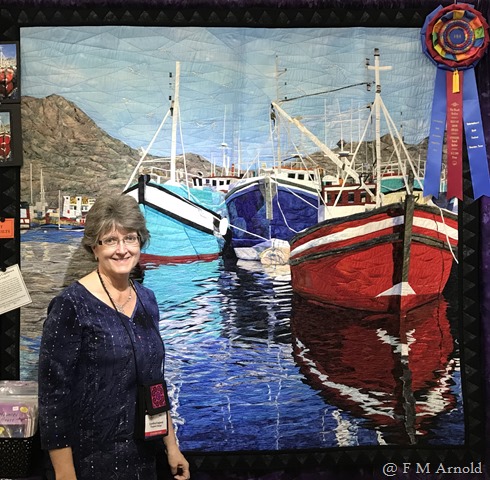 Linda had a class that afternoon so we met up again at 5:00 and headed out to find someplace to eat.   The only problem was that a parade to honor the World Series Champion Houston Astros had just ended and approximately 1 MILLION Houstonians were downtown as well so finding someplace with a wait time of less than 3 hours was a bit of a challenge.  We finally stopped at a McAlister’s Deli and spent a fun evening sitting outside and watching the city of Houston walk past!!

Celebrating our freedom on this 4th of July!! ⁣
Follow my blog with Bloglovin