On Wednesday my friend Linda and I caught a plane to the great state of Texas, to visit the IQF!!  The airport and plane were packed with quilters…some that we already knew and a bunch that we had never seen before, but you could TELL who they were!!!

We hit the local Tex-Mex place as soon as we arrived at our hotel and then went to the convention center to register and check things out.  The convention center has huge round windows on the second floor that look out over the show and I was SUPER excited to be able to see my quilt from there.   When the show opened we worked our way to the area so that I could get the picture that I had been looking forward to….. 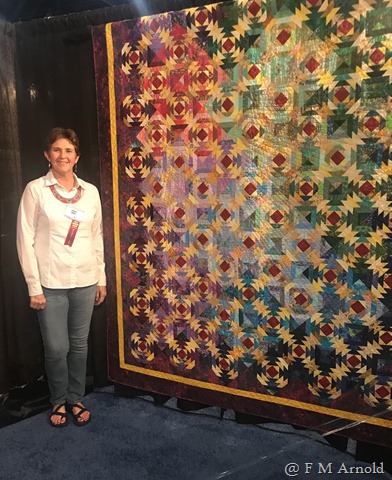 Last year it was exciting to have a quilt in one of the special exhibits but it was even better to have one in the competition!! 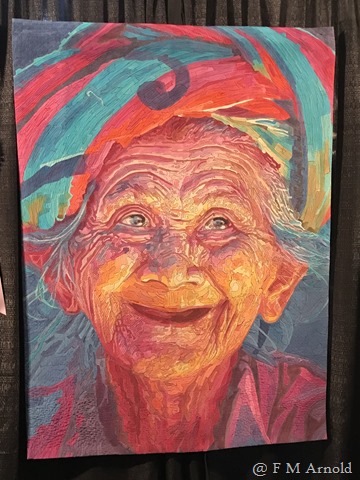 And, Velvet Flowers by Linda Anderson….. 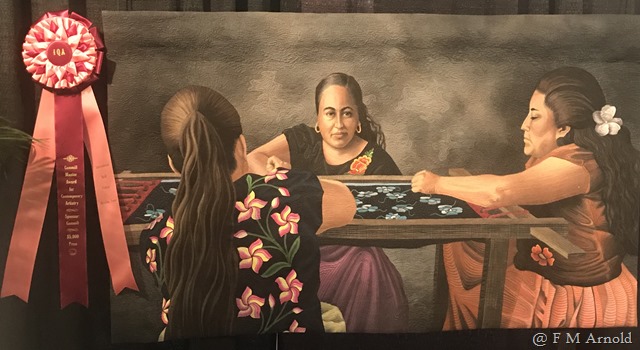 I enjoyed walking thru the “Tactile Architecture” exhibit, especially this quilt by Hsi –Chen Hsu….. 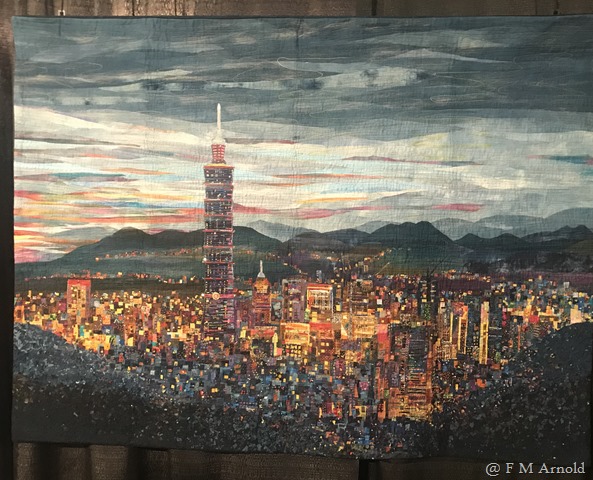 It had JUST the right amount of bling and crystals to bring it to life!!

There was an exhibit curated by Ricky Tims and Alex Anderson where a US quilter was matched up with an international quilter.   They exchanged emails, learned about each other and then made a small quilt to send to their partner.   This one was based on Ukraine folklore and was amazing….. 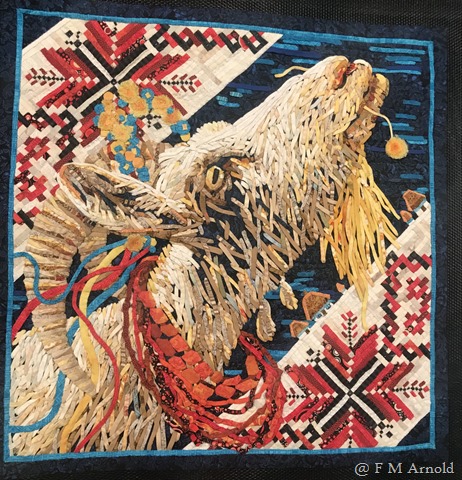 Each of the “hairs” were made from a narrow strip of fabric…..many looked like small tubes.   It was really cool!!!

It would have been fun to be part of this exercise!!

I loved the light in this quilt and, as I wrote this blog, I realized that it was made by the same woman as the cityscape above….. 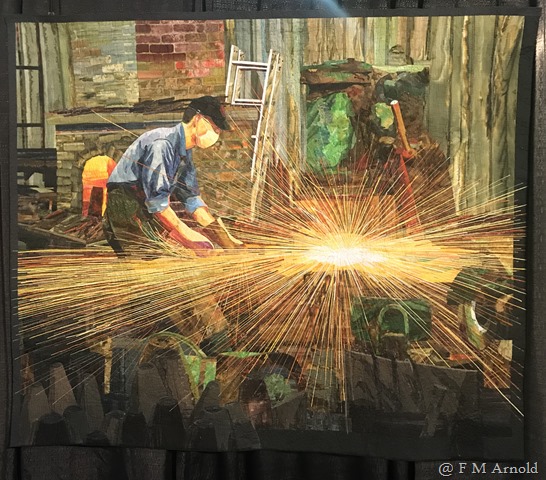 She obviously knows how to add light to her quilts!!!!

There was an “Elvis” exhibit and this one is called….. 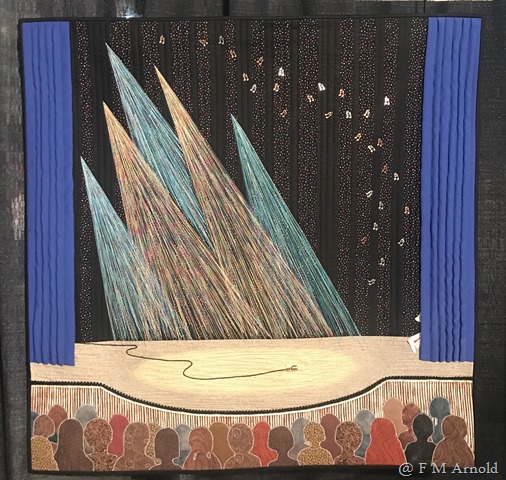 This amazing quilt (made by Karen McCarty) is mixture of fabric and photo prints…. 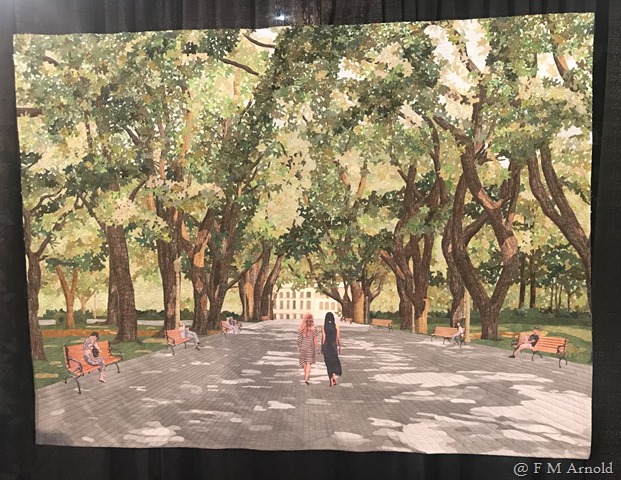 There was an exhibit featuring the thread painting of Lioudmilla Malchow and all of her pieces were so lifelike…. 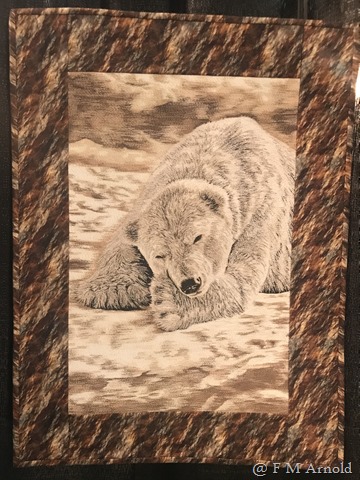 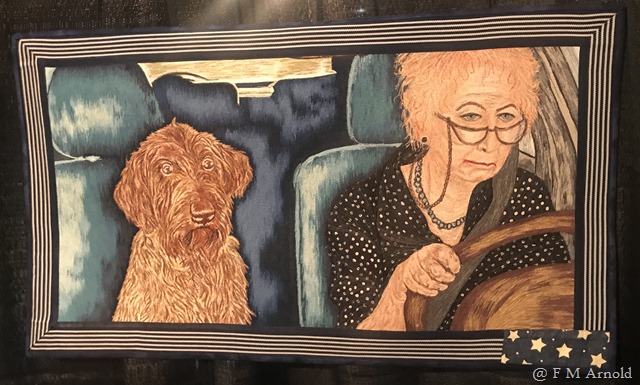 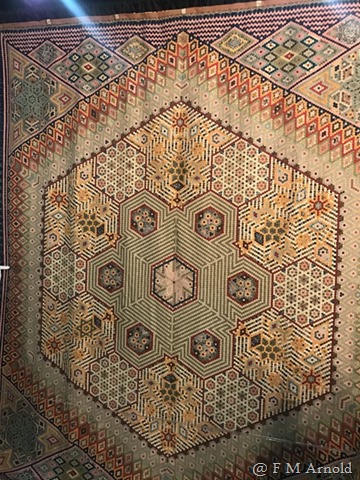 Michael’s comment was that this woman must have been off of her meds for too long!!  I, on the other hand, would have to be ON med’s to be able to do this!! 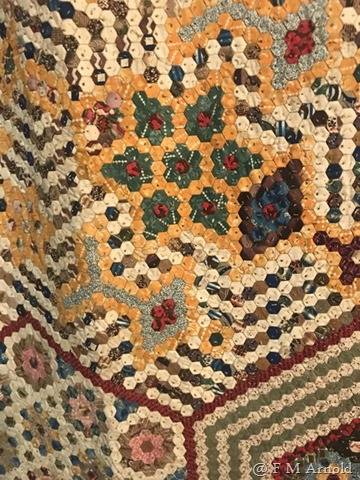 About this time the fire alarms went off and we were all instructed to leave the building but as we got to the front door we were told that it was a false alarm and that we didn’t have to leave.   It was funny to watch everybody calmly return to their shopping as the siren continued to sound and the strobe lights continued to blink.

We made it thru three or four rows of vendors and then called it a night!!