I’ve had about as much vacation as I can stand!!

When I left you yesterday, we had taken refuge in a $25 per night hotel.  We both slept fairly well and awoke to a set-in rain and no place to find breakfast.  I had brought some cheese crackers from the US and we had two packages left so we each had half a package of crackers for breakfast and a bunch of pain killers to take the place of the caffeine in our lives.

I walked back down to a store on the corner and bought more water, a Coke (for a little caffeine) and two bags of potato chips, which we had for “Morning Tea”.

We stayed in the room until noon but felt that we should go ahead and check out.  The proprietors were super sweet and were always smiling when we saw them and, as I said, the room was as clean as I have ever seen.  They had a sweet little boy (maybe 2 years old) who was often in the waiting area, once excitedly blowing bubbles with his bubble wand. They had taken 20 Yuan too much when we checked in and we were told that they would return it when we left (probably as a deposit for the key).  We tried to wave them off and leave the extra $2.50 with them, but they would have nothing of it and motioned for us to take the money!!

I know that this place doesn’t look like much, but it sure saved our bacon…. 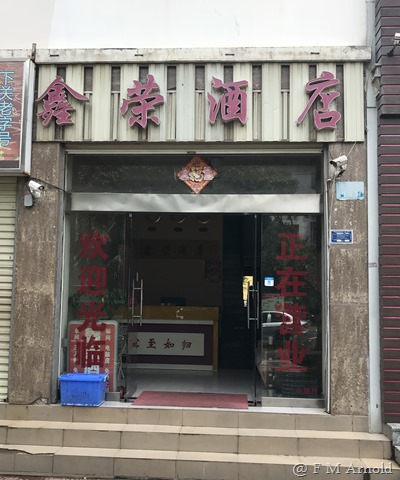 ….and if I knew the name of it, I would write an amazing review.  Of course, no one would be able to read it but that isn’t the point!!

We walked back to the train station, were greeted by a smiling identity checker, and fortunately were allowed to go in this time, although we were 6 hours early for our train.  We are not unused to layovers, having once spent the night in the Newark Airport McDonald’s and 17 hours in the New Delhi airport, so we settled down with our computers and Kindles and waited it out.

Eventually we started getting hungry so we pulled out what we have now named the “Dali Diet”….. 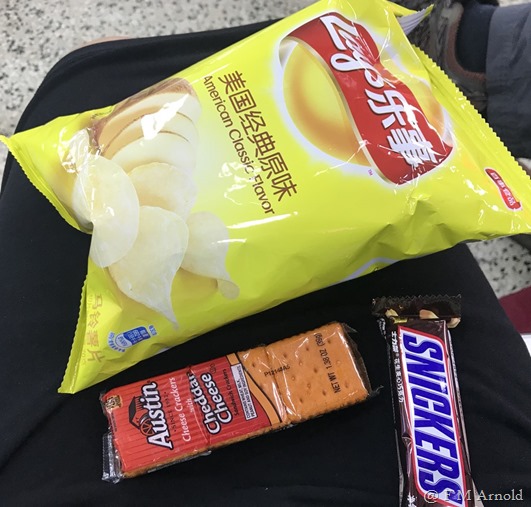 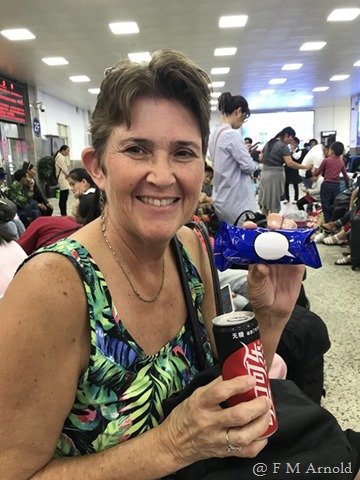 ….and sweet, milky coffee for Michael.  He was so desperate for caffeine that he didn’t care about the milk or sugar and even used a straw to drink the hot liquid…… 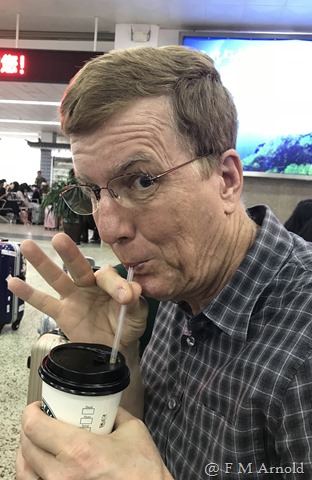 Now before I go on, I know that there was tons of food around us but, quite honestly, we were in too delicate of a condition to try to communicate exactly what we wanted!!  It was simply easier to be a little bit hungry!!

It was interesting watching the train station as the day went on.  It would be empty right after a train left but then people would start filtering in and filing all of the seats.  About 30 minutes before a train was departing, people would start lining up (if a mob can be considered a line) and waiting for the gates to be opened.….

When they were opened, everyone would rush forward to be the first ones on the train.  As soon as the first rush was over, people for the next train would start amassing by the gate.   After about 10 minutes, a railway employee would start talking on a hailer telling people that they needed to get on board and also making a lane in the throng so that those late-comers could get thru to the gate.

It was fun to watch the personal interactions in the terminal, like these two little girls sharing 1/2 of a small watermelon….. 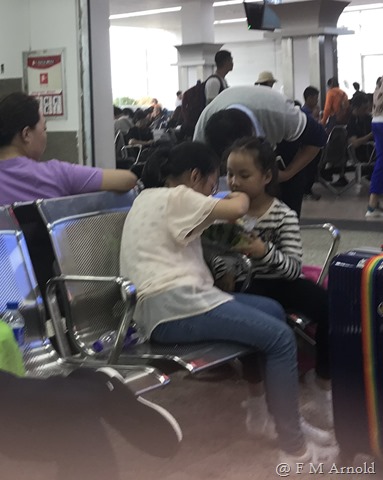 They almost dropped it several times but always caught it before it slipped and then they would laugh and start eating again.

We loved this sunflower seed dispenser….. 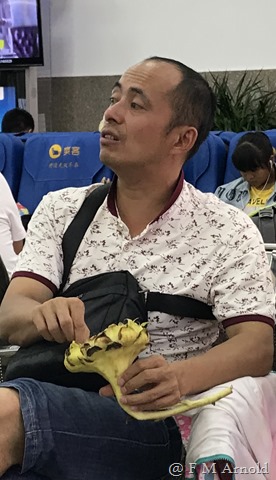 By the way, Michael took this photo while we pretended to be taking a selfie….our newest method of surreptitiously taking photos.

And, this is a blurry photo, but I wanted to show the stairways in the terminal….. 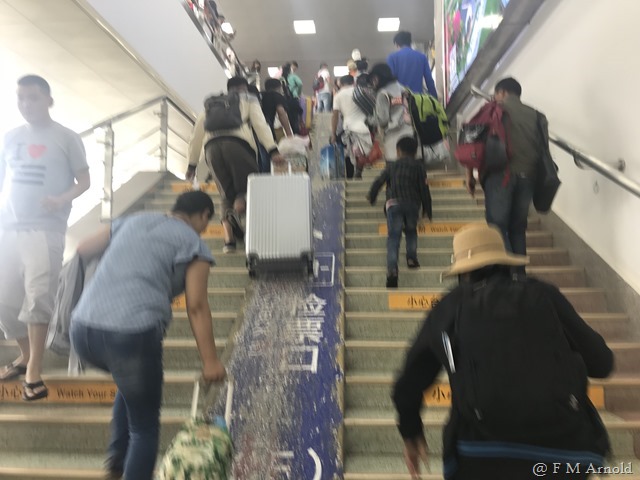 This ramp in the middle is designed (as you can see) for rolling your suitcase.   That is fine for going up, but we saw many people trying to roll them DOWN the stairs and invariably the suitcase would get ahead of them and almost cause them to fall down!!

When it was about an hour before our train was set to board, we left our chairs and moved to our waiting area.  Since we had watched so many trains leave before us, we knew the drill!!  When the train previous to ours lined up, we moved to the edge, just outside of their line.

At this point we had the nicest interaction of the day.  A young man started talking to Michael and asked where we were from.  He was in his last year of High School and his English was magnificent.  He told us that he had been on a fun-filled vacation in Dali (so that was possible!!) with his family and then proceeded to introduce us to his Mom, Brother and Aunt.    His Mom beamed proudly as her son talked to us!!

When it was our time to line up, we moved up with the throng to the front of the line and then realized that we were probably in the wrong line….we had blue tickets and this line was for red, but we decided to play dumb American’s (not a stretch for us) and just walk thru.   The ticket-taker just looked at us and let us go past.   She probably thought that it simply wasn’t worth the effort to stop us!!

We found our seats and enjoyed the 2 hour ride back to Kunming but, of course, it was pouring down rain when we arrived.

As we were walking out of the terminal there was a crush of people trying to get their umbrellas opened before we stepped out and it was quite a mess for a minute or two.  We eventually made it to the street and started trying to hail a taxi.

We had previously been told that Kunming Taxi Drivers sometimes don’t want to stop for fairs or will be really selective about who they get.  We must have made a VERY bad impression because we could not get any of them to stop for us!!  We decided to walk a bit down the road and try again when we weren’t as close to the train station so I got out my phone and made sure that we were at least walking in the direction of our hotel.   We tried several more times but could not get a taxi!!!

Finally, we decided that we would just have to walk the 2.2 miles to the hotel…..carrying our backpacks on our front, me with my purse on my shoulder and Michael with the duffel bag around his chest and on his back…and holding our umbrellas against the solid rain that was falling!!

The next hour is pretty much a blur as I think that we have both tried to block out the experience!!   At one point we were sluiced by a car hitting a HUGE puddle and we twice crossed roads without lights, which is tricky in the daylight and almost impossible at night!!

Fortunately neither of us slipped down on the wet sidewalks and we thankfully arrived at the hotel, a sodden mess!!!

We quickly unpacked, laying all of the wet items around the room.  We were happy with how our backpacks performed as only the outside pocket got wet and those only had items that were in Ziploc bags so that didn’t matter.   The duffel bag was soaked and a few of the clothes were damp, but nothing was ruined.

Needless to say, a shower was the first order of business and then to sleep the dreamless sleep of the exhausted!!!

To finish this drama, let me say that much of this fiasco was our own fault…… but not the part with the misplaced reservation.  We did, however, venture out on our own without any language skills and this is what got us into trouble.  Having said that, we have ventured before and have been fine, but these trips were always in large cities were English was more prevalent and the hotels that we stayed at were bigger and had English speaking employees.  We didn’t account for the fact that Dali was more rural and was not prepared to deal with the likes of us!!

Today, after having a nice breakfast at the hotel and a Hamburger and Fries lunch at Salvador’s, we can look back and see our mistakes but can also see the humor of some of our situations.   Again, we had angels who helped us when we didn’t know what to do and we met some very sweet people along the way.

We will always be thankful for Fred (our Taxi driver) who put up with SO much from us!!!  He even tried to reduce the fare on the return trip but we insisted on paying him the full fare, plus a bit more.   We hope that he, and everyone that we met, will have come away from the experience with a good feeling about Americans….even the crazy ones!!!

And yes, we will adventure again….maybe not in rural China, but we will certainly continue to enjoy our travels in the world!!

5 thoughts on “I’ve had about as much vacation as I can stand!!”