The Tiles of San Giovanni…..

Well, after many months (7 to be exact), I have finished my Roman tile quilt, now named “The Tiles of San Giovanni”.

If you are new to this journey, here are the posts in order of appearance…..

Part 1 – Roman tiles on my mind

Part 2….the day that math let me down

So, where we left off, the interior tile work was well under construction …. 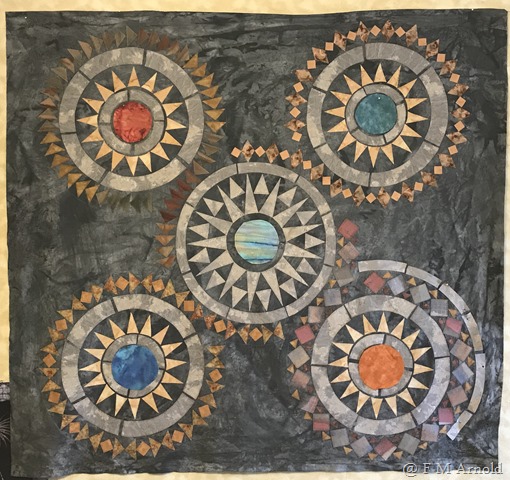 ….although I still hadn’t decided exactly where it was going from here!!

I really liked the greyish fabric and thought that it would be good to use in the thin outer rings but I only had a small amount of the fabric left.  I looked online and traveled to a local-ish store that has thousands of bolts but couldn’t find anything that came close.   I actually did buy two fabrics that looked perfect in the store but were completely different colors when I got them into different light…..grey’s are bad that way!!

So I did the next best thing and decided to just use what I had and figure it out if I did run out!!   The wonder-under was trimmed with TINY margins and the pieces were tightly placed on the fabric….. 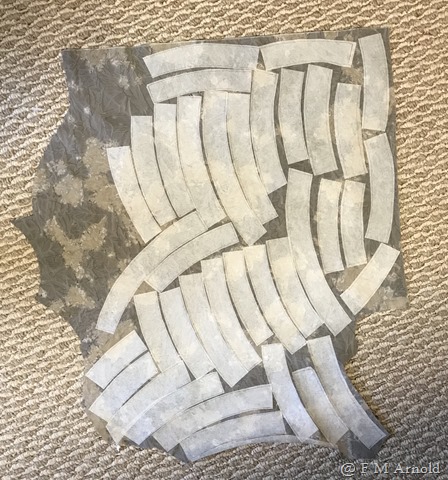 ….and look, there is a bit leftover!!

At this point, I was ready to start thinking about the background…… 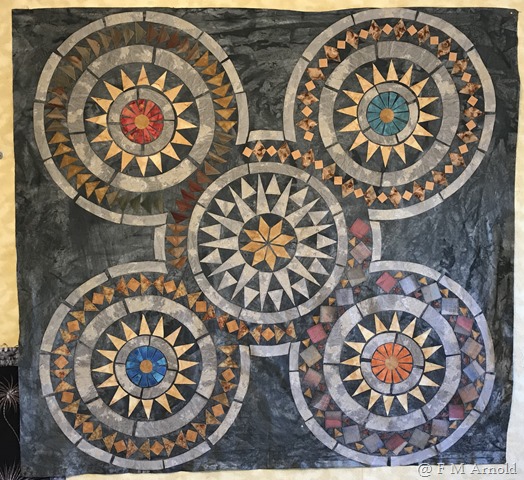 ….but there was one thing that had been bothering me.   Look at the top and bottom of the circles on the right.   do you see my problem?   My pattern had been off by about 1/2 inch and the outside rings butted up against the edge of the fabric.   There was NO room to add a border or anything else!!

Now I have always said that my mantra in life came from a “Calvin & Hobbes” cartoon with the statement that…..”A day without denial is a day you have to face”.   But I had denied it long enough and it was time to tackle the problem before I went any further.

After much pondering, I decided to remove the two outside pieces that were touching the edges and fuse down a small strip of fabric on the edge and then reapply the outside circle. 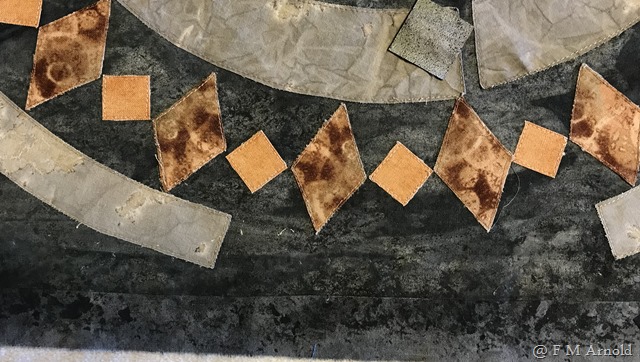 Amazingly, it worked and now you cant even see that it was mended!!

Next I had to think about what would go in the outside background areas.  In the original tile floor there were lots of new patterns in the background….. 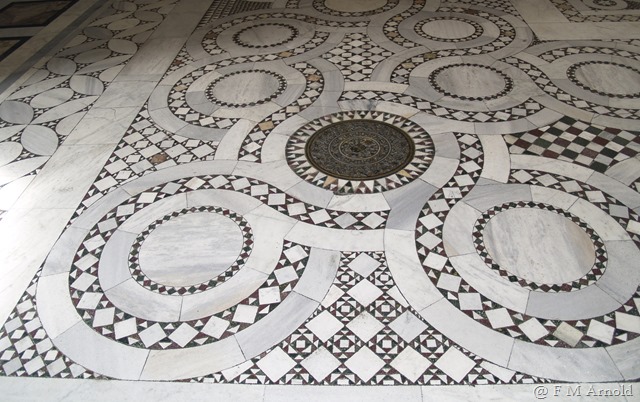 ….and I was originally planning to do that, but I just never could get excited about it.   Then I was showing it to a quilting friend one night and as we talked about it, I realized that I really wanted to keep the background simpler and just do 1 inch squares.

I found two lovely fabrics that would provide all of the squares that I could want.  Both were gradations, one from black to brown and the other from green to red and the variety that they provided was perfect.

I started each section by centering the first square and drawing lines out from it….. 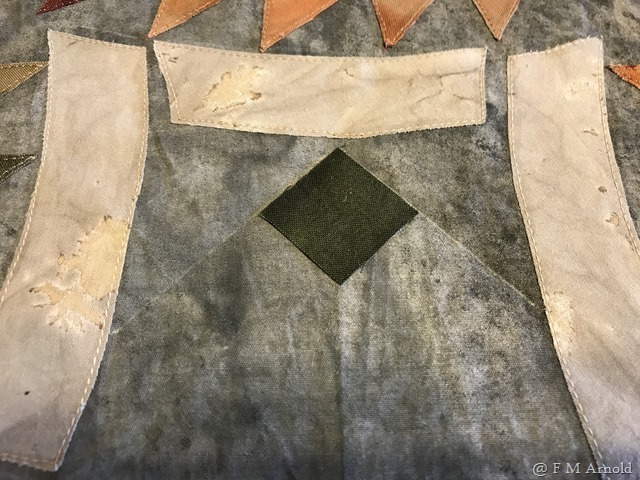 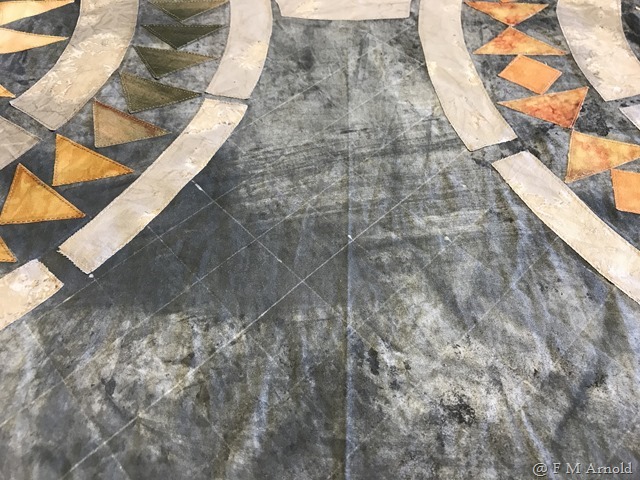 And then I would start adding the squares….. 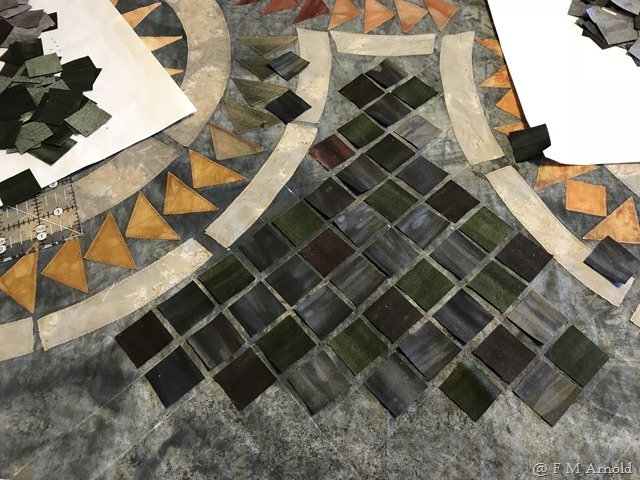 …..trimming them down as the approached the curves….. 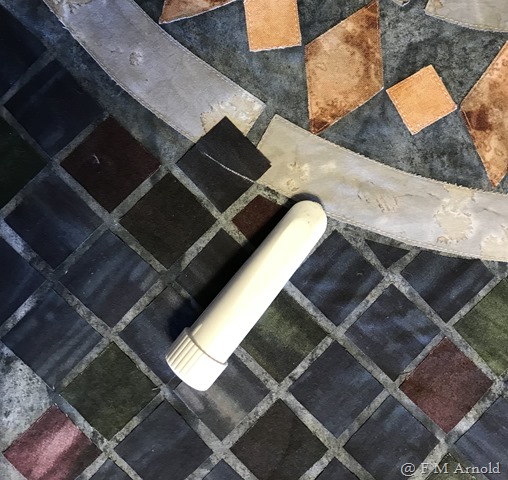 As soon as I had done a couple of sections, I could see that this was the perfect way to enhance the center tiles…..it seemed to make them just pop off of the quilt…… 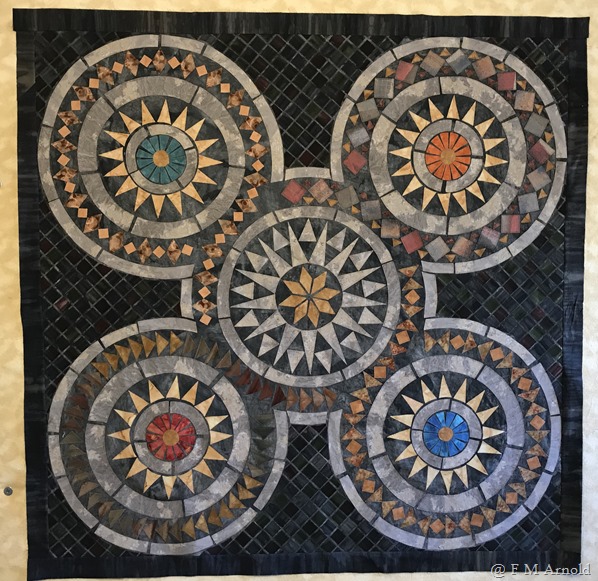 I added a narrow border and started the quilting process.  The quilting was kept simple, just echoing all of the “tiles”.  I chose to do a knife-edge finish and, voila…..the quilt was finished…… 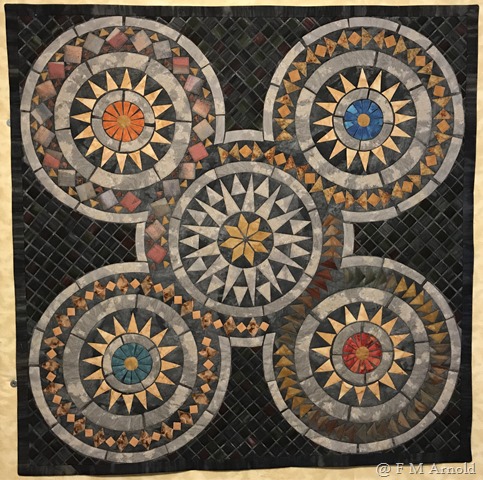 I do have one issue with the construction….since I used a LOT of fray check, the quilt has become very stiff, and the quilting process has left observable needle holes in the background fabric.   I am hopeful that those will fill back in as the quilt is used.

But, overall I am VERY happy with the quilt and feel that it is a wonderful reminder of the feelings that I had on that sunny day in Rome!!!

3 thoughts on “The Tiles of San Giovanni…..”